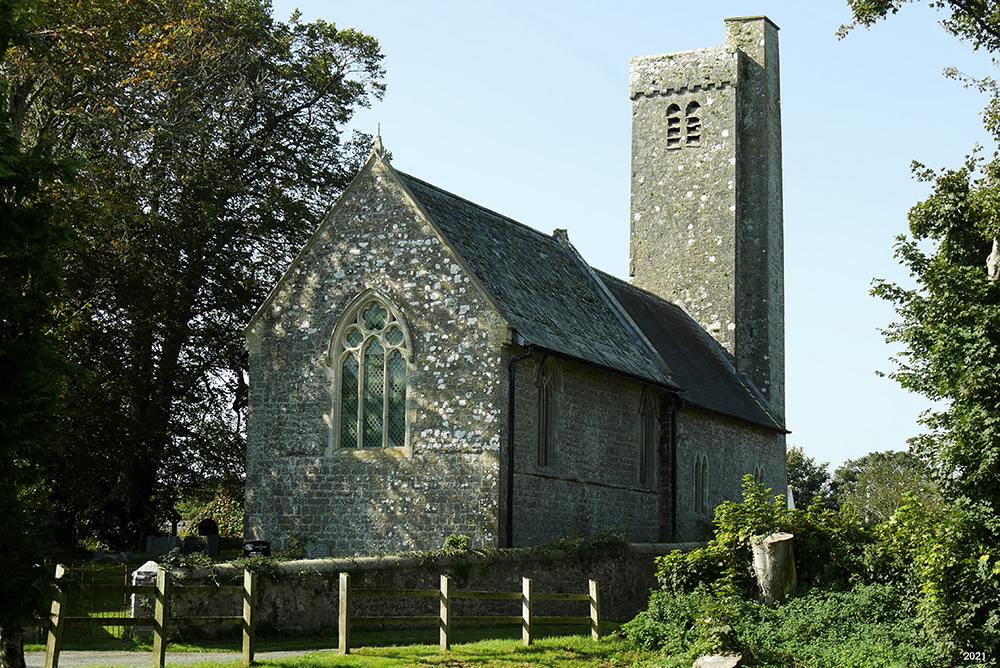 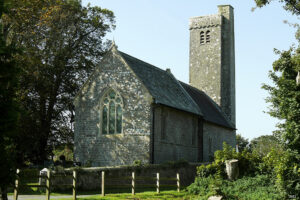 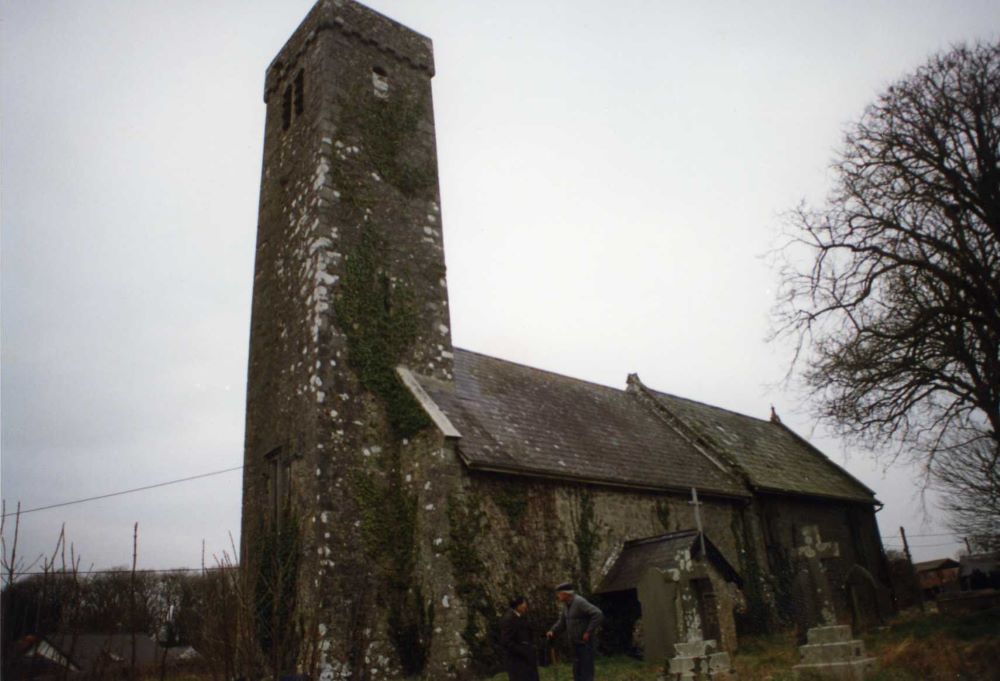 Reason for Listing: Listed Group II* as a mediaeval free chapel including an important C14 chancel with Decorated period sedilia and piscina. Additional importance as the C19 restoration of this church was intended to be a model for future church restorations.

Since December 2000 this church is owned by the Friends of Friendless Churches on a 999 year Lease.

The present church consists of a large, elaborate 3-bayed chancel, a 2-bayed nave, a south porch, and a 3-storeyed west tower. Construction is in limestone rubble. The nave and tower are barrel-vaulted. There are medieval openings in the tower and window embrasures, piscina and sedilia in the chancel; other openings, including the chancel arch, were rebuilt in the mid- and later 19th century, in neo-Gothic style with yellow oolite dressings but partly in imitation of pre-existing openings. Pointing is mainly from the mid- and later 19th century, and the tower was repointed in the 20th century; the interior is plastered. Roofs are slated gables; the tower roof was not seen.

The chancel is very large in relation to the rest of the church, and roofed at a higher level than the nave. It was (re)built in the mid 14th century in an elaborate, Decorated style, but heavily restored in the 19th century when the windows, and the chancel arch, were rebuilt. There is a weathered external string-course at sill level, 14th century, and a similar internal string-course on the north wall. The 3-light east window has cusped, Geometric tracery in a 2-centred arch and drip-mould on human mask stops, all from the mid 19th century and, though in the general style as the surviving 14th century work, replacing a plain window from the ?18th century (see Structural Development below), in a 14th century embrasure. The side walls are both pierced by 2 light windows with cusped, ogival heads, quatrefoliate spandrels and 2-centred surrounds with drip-moulds on out-turned stops, again from the later 19th century but in 14th century embrasures. The internal face of the east wall exhibits 14th century corbelling, possibly associated with a former altar-beam or statuary. Internally, the east bay south wall exhibits a large cusped, ogival-headed double piscina with crockets and finials and a scalloped bowl, in weathered sandstone of Decorated character from the mid 14th century; the central free shaft has gone but the surrounds have semi-octagonal attached shafts. To the west is a stylistically similar, and equally elaborate triple sedilia, with similar mid 14th century mouldings and retaining its 2 weathered, octagonal free shafts. The limestone flag benching extends west to the chancel arch, where it gives onto a flight of 6 steps leading to a former rood-loft doorway, and the loft corbelling survives in the nave, but the 2-centred, double-chamfered chancel arch, on plain stops, was rebuilt in the mid-late 19th century. At the junction with the nave, the north wall exhibits a plain, external buttress from the 14th century. The softwood roof is mid-late 19th century and has queen-post trusses cusped into quatrefoils and arch-braced from moulded oolite wall-corbels. The tiled floor is also mid-late 19th century.

The west tower is not typical of the region being small, narrow and tapered, and lacking an external basal batter and string-course; it belongs, stylistically, to c.1600. A square spiral stair turret projects from the eastern half of the north wall, entered through a 2-centred doorway from c.1600, and lit by simple loops. The ground floor is entered from the nave through a plain, 2-centred arch from c.1600, that respects the profile of the barrel-vault. The west wall is pierced by a 2-light window with square surrounds and a plain label on out-turned stops, from the later 19th century but probably a rebuild of an original from c.1600. The flagged floor is from the mid-late 19th century when it may have been lowered. The second stage is lit by a large, square-headed single light in the south face, from c.1600. The belfry stage has uncusped 2-light openings the east and west faces, with semicircular, 2-piece heads, and there is a similar, blocked, single light in the south face. The parapet lacks crenellations and lies on an external corbel table which does not continue around the stair turret; there is a rainwater chute on the west.

The small south porch was added in the late 19th century in roughly squared and coursed limestone rubble. The contemporary doorway is a plain, 2-centred opening. The softwood roof lacks trusses, and is matchboarded. The flagged floor is also late 19th century.

The church stands on a low mound, which however is probably natural. There is a shallow external drain at the east and west ends of the church. There has been a considerable build-up of churchyard deposits around the church and the head of the former north door is now very low. The tower floor may have been lowered. The nave floor is suspended above a void. External memorials and burial earthworks lie significantly close to the east, west and south walls.

The nave appears to pre-date the chancel and its openings may be 13th century, but its the vault may be later. The chancel has Decorated detail from the mid-14th century; it is of a very high quality, similar to that at nearby Carew church, and dwarfs the nave, but the reason for this is unknown, the church always having been in the patronage of relatively insignificant laymen. The tower stylistically late, from c.1600. The south porch is 19th century.

Drawings from the mid 19th century show the church before and during restoration. In the earlier drawings (Tenby Museum & Art Gallery, 1983/1745) there was no south porch and the nave and chancel are depicted as being roofed continuously. The south door is shown with a very low, semicircular head. The chancel east window had been replaced with a small round-headed light, 18th century?, and the chancel south windows had been blocked. A small, 2 light window, of 17th century appearance, lay high in the nave south wall.

A slightly later drawing, from 1854 (NLW, Drawing Volumes 24, 4), shows that some restoration had already taken place. The chancel was roofed at a higher level than the nave, with new upstands and weather tabling. The present chancel east and south windows appears to be shown and the present north wall windows are suggested; the chancel may have been reroofed and refloored, and the present chancel arch inserted at the same time. However, the nave north door was still open, with a low, semicircular head, and the north wall itself was blind.

The nave was restored later in the 19th century when the north door was blocked and the present windows were inserted. It was reroofed and refloored. The south porch was probably rebuilt at this time and the tower ground floor west window was rebuilt. The details of neither restoration, nor the architect(s) responsible, are known.

The softwood pews and pulpit are from the late 19th century. The stalls, and possibly an organ, have been removed from the chancel but the scars remain.

The font has a square, scalloped bowl with an incised wheel-cross, and a cylindrical stem and base, all 19th century or retooled?.

Fenton refers to an account of 1717 describing ‘ruins’ of a former ‘religious house’ that were apparently visible at the church (Fenton, 1903, 238).  There appears to be no basis for this interpretation.

Hodgeston Church was a parish church of the medieval Deanery of Pembroke during the post-conquest period according to Rees, 1932; according to Green, 1912, 203, however, the benefice was originally a free chapel. It had become a parish church by the post-medieval period. The church appears to have always been in the patronage of the Lords of the Manor of Hodgeston, one moiety of which was vested in the heirs of the Baron de la Rote, the second moiety belonging to the heirs of the de Longueville family, as a result of the partition of the Marshal inheritance in 1247. It remained in joint patronage.

In 1998 Hodgeston Church was a parish church. The living was a rectory, held with Lamphey and Carew (Benefice 811) in the Archdeaconry of St Davids, Rural Deanery of Castlemartin (St Davids, 1997-8).

The dedication is unknown.