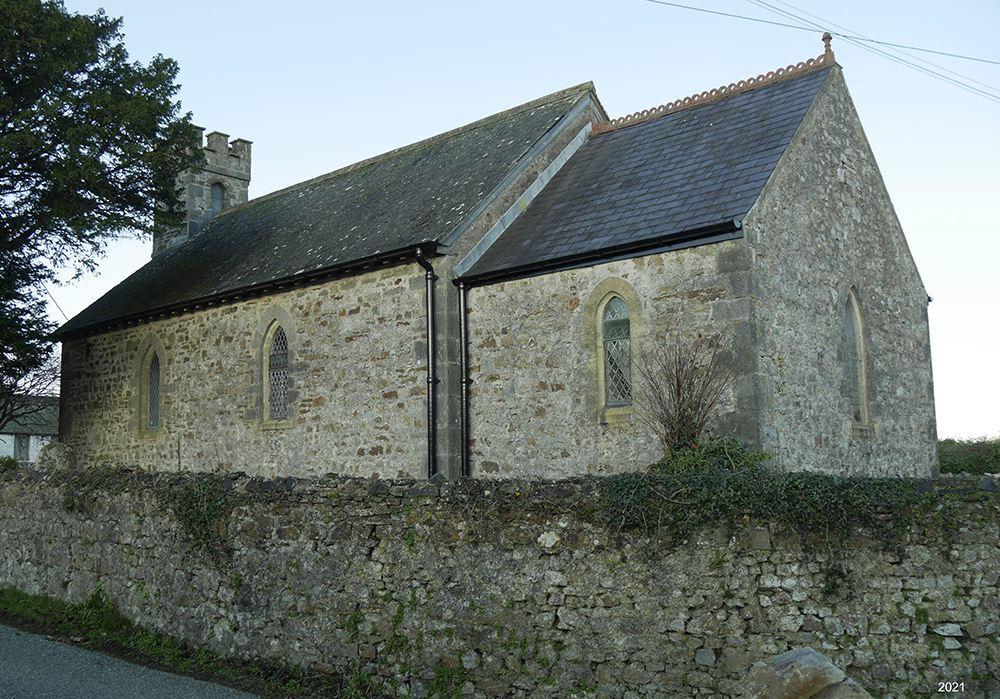 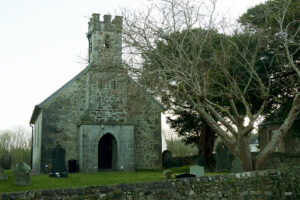 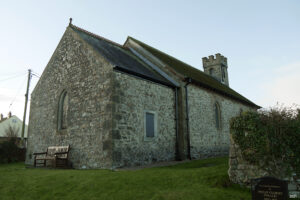 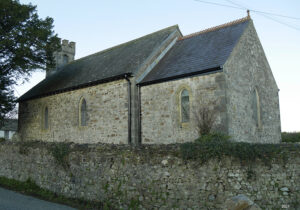 Reason for Listing: Listed for the tower and for the unspoilt early C19 interior, an interesting example of pre-Ecclesiological Movement Gothic.

Archaeological potential – good. Wide, shallow, earth cutting around 30% of church, primary?; suspended floor over a void in 60% of church.

Redberth Church is a 3-celled church, of small size. It was rebuilt in 1841 on the same site, and in the same location as its predecessor, possibly retaining some earlier fabric.

The present church consists of a single-bayed chancel, a 2-bayed nave and a west porch incorporating a bell-turret. Construction is in limestone rubble. Openings are mainly from 1841 and simple neo-Gothic; the windows are single-light, 2-centred and square, with simple grey oolite dressings. The chancel arch is simple, 2-centred and from 1841. The west porch is also from 1841 and in limestone ashlar, with a 2-centred door. Rising from it is a rubble buttress, with 2 string-courses and pierced by 2 square-headed bellcote openings, that formerly terminated as a gable; it was later heightened to form a square, crenellated bell-turret, with a 2-centred opening in each of the 4 faces, possibly in 1913. Other roofs are slated gables.

The earlier church appears to have followed the same plan form (NLW, Redberth, Tithe Map, 1841). In 1833, ‘having fallen into a very dilapidated condition’, it was undergoing ‘complete repair’ (Lewis, 1833); this may represent the same general campaign dated to 1841 and which was undertaken by George Brown of Craigyborion, Amroth (SPARC, n.d.). It is possible that some of the earlier core fabric was retained. The present roofs and floors date from 1841, and there is a good range of internal fittings from 1841 including box pews and a 3-decker pulpit (cf. near-contemporary fittings at the nearby church at Nash).

The church was renovated to the designs of the architect F. R. Kempson, of London, in 1913 (A. Gordon, 1993; Pembs. R. O., HPR/20/9). The work was largely superficial and fittings were retained, but may have included the rebuild of the bell-turret into its present form.

The font has a square bowl with incised decoration, early 13th century?; the cylindrical stem and base, in oolite, are 20th century (1913?).

There is a wide, shallow, earth cutting south of the nave. The floor is suspended over a void in the nave. No external memorials lie significantly close to the church.

Reason for Listing: Listed for the tower and for the unspoilt early C19 interior, an interesting example of pre-Ecclesiological Movement Gothic.

Redberth Church was not a parish church during the post-conquest period (Rees, 1932), but a free chapel of Carew parish in the medieval Deanery of Pembroke. It was a possession of the Knights Hospitaller of Slebech.

Redberth had become a parish by 1833 when the living, a perpetual curacy, was endowed with £1200 royal bounty and £200 parliamentary grant (Lewis, 1833). The patronage had recently passed from the Vicar of Carew to the Bishop of St Davids.

In 1998 Redberth Church was a parish church. The living was a vicarage, held with Manorbier and St Florence (Benefice 810) in the Archdeaconry of St Davids, Rural Deanery of Castlemartin (St Davids, 1997-8).

The dedication is unknown, but is occasionally given as St Mary.