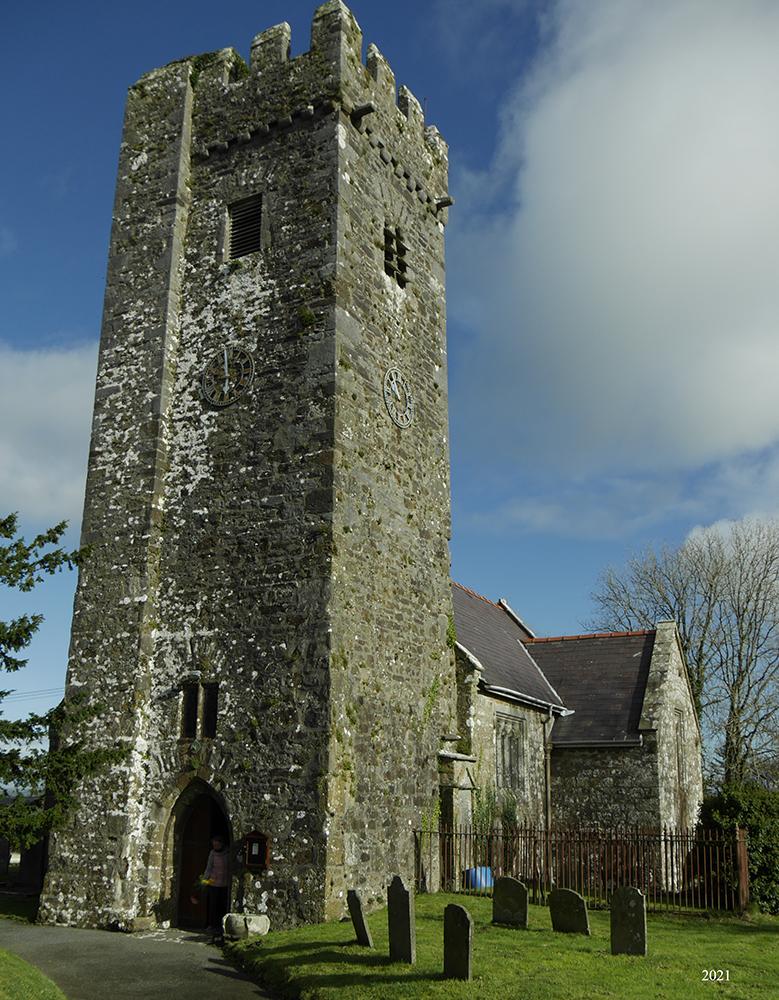 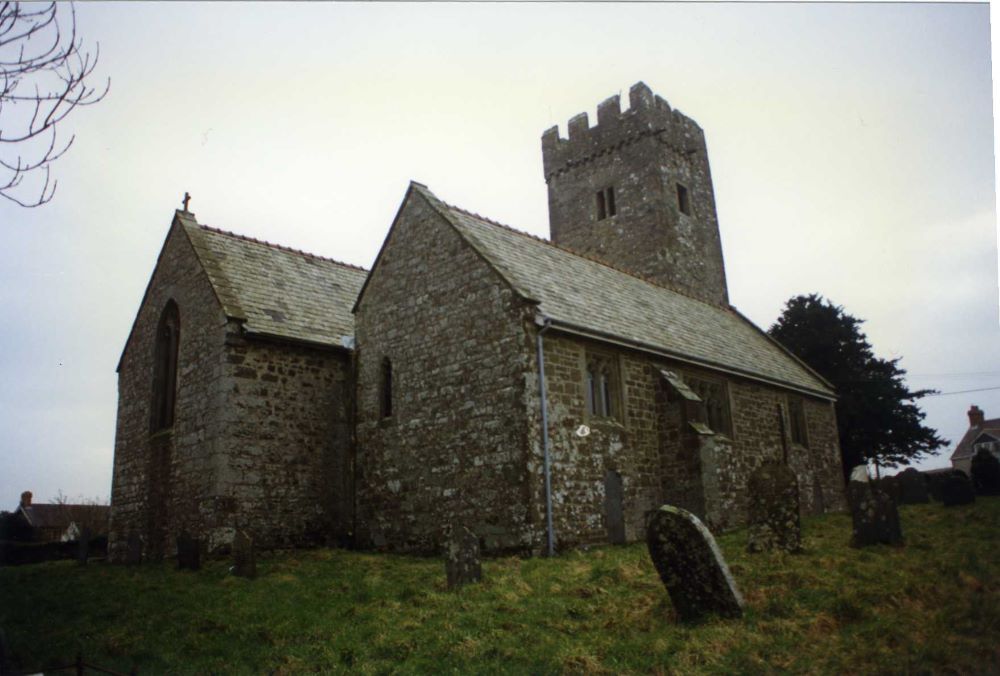 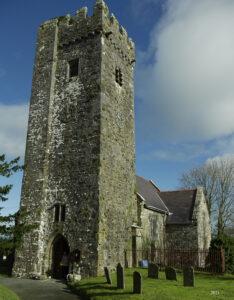 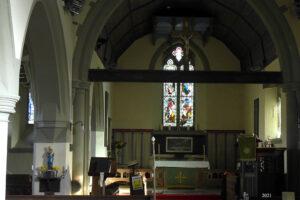 Reason for Listing: A prominently sited mediaeval church retaining some original masonry and a fine tower, well restored in the C19.

The present church consists of a 2-bayed chancel, a 2-bayed nave, a 3-bayed north aisle (absorbing former north transept), a single-bayed south transept and a 3-storeyed west tower. Construction is in limestone rubble; pointing is mainly from 1875, with some ?contemporary external render and poor 20th century repointing, and the interior is plastered. There is barrel-vaulting in the tower. The tower has retained some medieval openings, including a stoup and a 16th -17th century west window; other openings, including the chancel arch, are mainly from 1875, neo-gothic, with grey oolite dressings. Roofs are slated gables; the tower roof was not seen.

The 2-light chancel east window is from 1875 and has a moulded surround with ‘Decorated’ tracery. The south wall features a similar 3-light window but with a square surround, also from 1875; internally, to the east is a 20th century piscina. Internal corbelling below the side wall eaves may be pre-19th century. The moulded chancel arch is from 1875. The softwood ‘wagon-roof’ ceiling is from 1875 and has bosses at the frame intersections. The passage is tiled, with suspended board floors over a deep void, from 1875.

The nave is lit by a 3-light window like that in the chancel south wall, from 1875 but possibly occupying an opening from 1836. The roof is ceiled like the chancel but features tie-beams with king-posts, again from 1875. The passages are carpeted but feature heating flues and an underground chamber for a ‘Porritt’s’ stove, with suspended board floors over a deep void, all from 1875.

The north aisle is from 1875, replacing a medieval north transept from which none of the fabric was retained. It communicates with the chancel west bay via a full-centred, moulded semicircular arch from 1875. The arcade into the nave is contemporary and comprises 2 moulded, 2-centred arches. The aisle east bay is separated from the central bay, as a vestry, by 2 similar arches on a cylindrical pier, also from 1875; a stepped external buttress is built against the north wall opposite. The aisle is lit by a cusped, single lancet in both the east and west end walls, from 1875, and 2- and 3-light windows in the north wall, like the chancel south wall window and also from 1875. In the angle between the west wall and the tower is a buttress containing the flue from the Porritt’s stove, from 1875. The roof is like that in the nave, from 1875. The aisle has a suspended timber floor above a very deep void.

The west tower may be an earlier example of the type, lacking the external string-course typical of the region and having no external batter. It is not tapered. A square spiral stair turret projects from the north end of the west wall, entered through a simple square-headed doorway and lit by simple loops. The west door has a 2-centred chamfered surround of medieval date and apparently occupying an earlier opening, the southern jamb of which is visible; a 2-light window above has square heads of 16th – early 17th century date. Internally, the ground floor south wall features a stoup with a massive crude bowl in a recess with an asymmetrical arched head, again suggesting an early date; a horizontal line of sockets above may be associated with a former west gallery, 18th – early 19th century. The 2-centred arch into the nave reflects the profile of the 2-centred barrel vault. The ground floor is flagged, from 1875? Re-used flags?. The second stage is lit by a simple square light in the east wall; a ?relieving arch in the north wall is of unknown function. The belfry stage has 2-light, square-headed openings in the east and south walls, of medieval date; the similar single-light openings in the north and west walls are larger and may be later. The crenellated parapet lies on an external corbel table, much restored.

A shallow, earth-cut drain surrounds the church. External levels have been truncated along the north and west walls. The underfloor void is particularly deep, especially so beneath the north aisle where it may be vaulted, and internal levels truncated, particularly in the tower exposing its footings internally. There is a below-ground heating chamber in the nave. Few external memorials lie significantly close to the east end.

The chancel, nave, south transept and former north transept may all have been of one build, and 14th century. A number of features of the tower suggest that it is early, possibly earlier 15th century.

The church was illustrated by Dinely in 1684 in a view from the south, in which the nave and chancel can be seen, roofed continuously, and the south transept and tower (Nicholas, 1992, 3).

Some restoration may have been undertaken in 1836 when reroofing, raising the walls and inserting a window in the nave north wall were discussed in a vestry meeting (Pembs. R. O., HPR/37/8); the roof itself was restored in 1842 under the local architect Thomas Lewis, of Narberth (Cadw, 1997, 28).

The church was again restored in 1875 (NLW, SD/F/581, to the designs of the architect T. G. Jackson of the Temple, London. The restoration was high impact. The north transept was demolished, and the north aisle built instead. The chancel arch, and south transept arches were rebuilt. The church was refenestrated and reroofed. Levels, both internal and external, were truncated, and the church was refloored over a very deep void which may be vaulted in the north aisle (over a tomb?). The interior was replastered and reseated.

The font is 20th century, but the base and stem of a Classical, wineglass font of 18th century date lie loose within the church.

Robeston Wathen Church was a chapelry with a parish of its own during the post-conquest period (Green, 1913, 260), annexed to Narberth rectory in the medieval Deanery of Pembroke. The living was still consolidated with Narberth rectory in 1833 (Lewis, 1833).

In 1998 Robeston Wathen Church was a parish church. The living was a rectory, held with Narberth, Mounton and Crinow (Benefice 631) in the Archdeaconry of St Davids, Rural Deanery of Narberth (St Davids, 1997-8).

The dedication of the church is unknown. 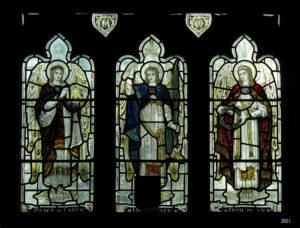 A Fallen Airman Meets the Risen Christ, 1947. (North wall of the Nave). 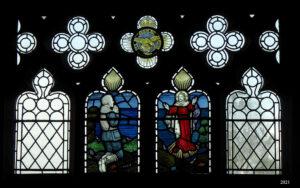 King David – From King David and the Good Shephard, c1921. 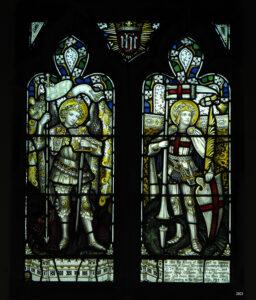 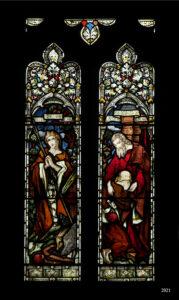 Christ Blessing Children Brought by their Mothers, 1876. (South wall of the Nave). 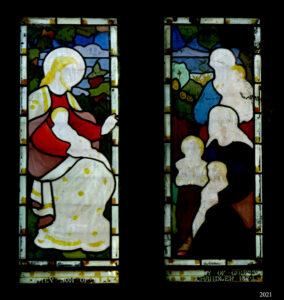 Note: Shows a lot of damage from the elements.