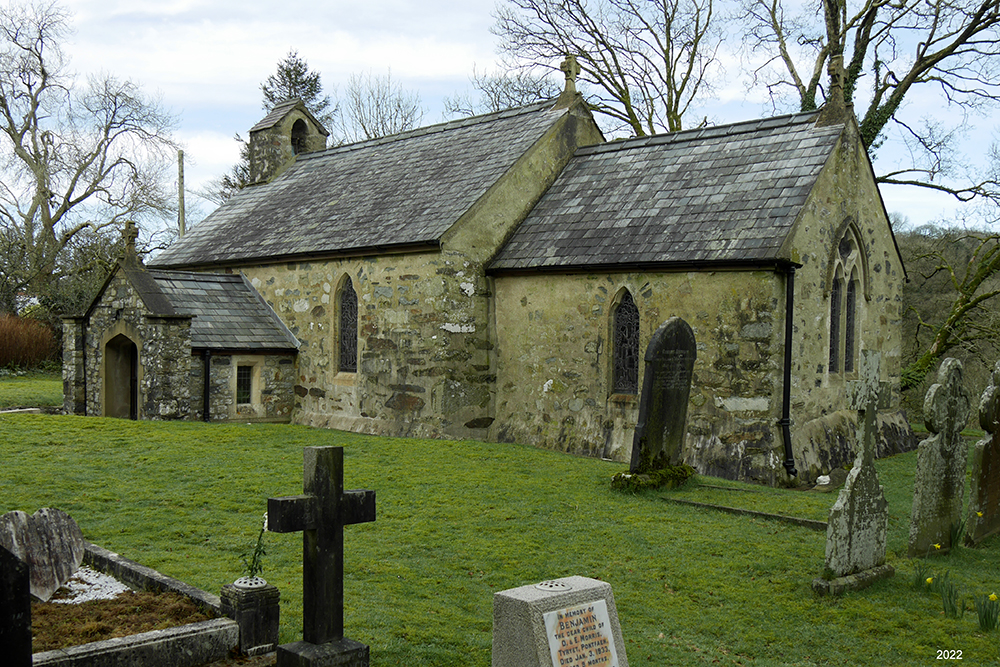 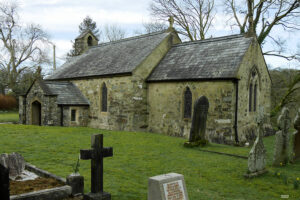 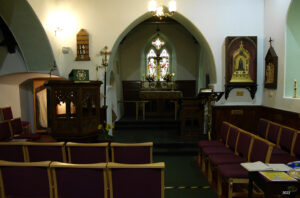 Reasons for Listing: Included as a church of medieval origin, forming an historic group with Plas Pontfaen and the outbuildings.

Archaeological potential – good-very good. Deep cutting around 100% of church, primary, footings not exposed; external earthwork beyond 30% of church, building debris?; floors lowered in 60% of church; floors not suspended, no underfloor void; no internal crypt/vault evident; no evidence for any former components beyond present church.

The present church consists of a 2-bayed chancel, a wider 2-bayed nave, a single bayed north transept with a large, low skew passage, a vestry in the angle of the nave west bay north wall and the transept east wall, and a south porch.

The medieval facework is in medium-large limestone rubble, with some Old Red Sandstone and slate, unsquared and uncoursed, with crude medieval quoins. Poor incised pointing from 1880-1904 obscures masonry, and there has been some repointing from 1987. Internal render/plaster, 1880-1904. The church is entered through a south door. Roofs are slated gables, the nave always roofed at a higher level; the vaulted skew passage is lean-to roofed continuing the chancel roof northern slope; the roofs were partly reslated in 1987.

The chancel has a pronounced, irregular external basal batter. The east window has 2 cusped lights and a quatrefoil-pierced spandrel, in a 2-centred oolite surround and drip-mould, all 1880-1904 but possibly using an (unblocked) existing medieval opening. A window in the south wall was all new in 1880-1904 and is a single, cusped oolite lancet; to the east is a square, compartmented aumbry also from 1880-1904. The 2-centred chancel arch is fairly low, plain and probably 14th century; there is a plain impost on both stops, running around the pier between the chancel arch and skew passage at springer level, primary?. A corbel to the north, not shown in an engraving of 1865 (see below) may nonetheless be medieval, for a former rood-loft. The softwood chancel roof has collar-rafter trusses arch-braced from hammer-beams near the wall-tops, and neo-Gothic panelling between the queen-posts, all 1880-1904. The floor is tiled, 1880-1904.

The north transept lacks the batter seen in the nave and chancel, is quoined, and is probably later, from the 14th century. It communicates with the nave east bay through a plain 2-centred arch, similar to the chancel arch whose impost it shares. The north wall is pierced by a window, like the east window but with a trifoliated spandrel, also 1880-1904 and enlarged from an existing opening. The gabled roof is like those in the nave and chancel, 1880-1904. Floored as the nave.

The skew passage is entered from the transept through a low, plain segmental arch, 14th century, reflecting the profile of the passage vault; the arch into the chancel is similar. Externally, the passage outside wall is not diagonal but forms an almost square projection, partially battered and with projecting stones at the base (not footings?).

A deep, earth-cut cutting surrounds the church, primary, not exposing any footings, with a concrete lining and revetted around the porch. There is an irregular external earthwork beyond the north walls of the chancel, north transept and skew passage, building debris?. The nave and north transept floors have been lowered. The floors are not suspended and there is no underfloor void. No internal crypt/vault is evident. There is no evidence for any former components beyond the present church walls.

The church has a simple 3 celled plan retaining most of the medieval fabric and arrangements. The nave and chancel may be contemporary, both being battered externally, 13th century?. The north transept and skew passage were probably added during the 14th century and their arches accord with such a date; the chancel arch is similar, shares an impost with the new work and was probably rebuilt at the same time. The church was always entered from the south but the south porch and vestry are both from 1880-1904.

It was described as ‘not remarkable for any architectural details of importance’ in 1833 (Lewis, 1833). It was became disused shortly afterwards, and by 1859 was a ‘ruin’ (Jones, 1865, 179-182). A detailed contemporary account of the ruined church (ibid.) is accompanied by an engraving of the interior and is worth reproducing in full. At the time the church comprised just the chancel, nave and north transept with the skew passage. The church was entered from the south, as at present. The 2-centred chancel and transept arches were as at present but the skew passage arch to the chancel is shown as semicircular. The chancel was lit by a small, square sash east window of 18th-early 19th century date, while the north transept north wall was pierced by a square-headed opening with a 2-light cusped window of c.1500. There was also a plain, 2-light window in the nave south wall. A semicircular-headed aumbry occupied the nave east bay north wall, now gone. ‘All was of the latter part of the 15th century; but…had been much mutilated, and badly treated at various periods.’ There were 3 plain stone altar tables within the church, one loose in the skew passage, and 2 in situ in the north transept either side of the passage arch, demonstrating that the transept was a chapel, an ‘unusual circumstance to find such adjuncts of ancient Catholic service remaining’. The floor was at one level and flagged; the roofs had simple collar-rafter trusses in poor repair. The altar rail was of simple timber balusters and there was a ‘modern’ altar table. No seating remained.

The church had been restored by 1883, one of the stone altar table-tops being used as the sill for the south door (the other 2 have gone); a contemporary account (Anon., 1883, 341) termed the work ‘only a renovation’ and in the absence of any specifications it is not possible to determine its impact. Some of the work, particularly the erection of the south porch and vestry, may belong to a further restoration undertaken between 1901 and 1904, when the church was reopened (Anon., n.d.; Jones, 1995, 1).

The cumulative restoration work has been medium-high impact. The church has been refenestrated, with new openings in the west wall and the chancel south wall; the north transept window is an enlarged pre-existing opening. The south door was rebuilt. The interior was replastered, but the extent of removal of the existing plaster is unknown. The church was reroofed, without tabling, and refloored, the nave and transept floors being lowered. Many of the fittings date from this period, including the altar table and rail. The pulpit is dated 1907.

The south porch and vestry were new built in 1901-4 in facework similar to the medieval fabric. The porch side walls have a plain, basal external offset, and there are angle buttresses at the southern corners; both walls are pierced by simple square lights. The doorway has a 4-centred surround, in concrete and from 1987 (guide in church). The roof is of softwood common rafters with collars and ashlar posts, partly replaced in 1987. The floor is tiled directly on the substrate, 1901-4.

The large vestry is entered through a door inserted in the north transept east wall in 1901-4; it has a plain, segmental head. There is an external clasping buttress at the north-west corner, and a window in the west wall of 2 square lights in a square oolite surround that is badly weathered. It has a matchboarded ceiling and a lean-to roof nearly up to nave eaves level. Floored as the nave.

There has been some further work. The wainscot dado in the nave, north transept and vestry is dated 1922, while the nave and transept seating is loose and from the later 20th century. Extensive repointing was undertaken in 1987, especially in the vestry and south porch, the latter being substantially repaired.

The limestone font has a plain, square bowl, stem and base, all chamfered, from the 13th-early 14th century.

At the dissolution, Haverfordwest Priory and its appurtenances fell to the king, including the patronage of Pontfaen. It had passed to the Laugharne family by the later 18th century, and thence to the Ardens who funded the church restoration (ibid.). The church had become the parish church of Pontfaen by the 17th century (Evans, 1919, 219-20).

In 1998 St Brynach, Pontfaen, was a parish church. The living was a vicarage, held with St Mary Fishguard, Llanychar, Morfil and Llanychlwyddog (Benefice 814) in the Archdeaconry of St Davids, Rural Deanery of Dewisland and Fishguard (St Davids, 1997-8).

The church and appears originally to have been dedicated to St Brynach (Green, op. cit.). The dedication, however, became corrupted to St Bernard (Lewis, 1833) before returning to its original form. 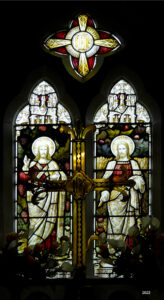 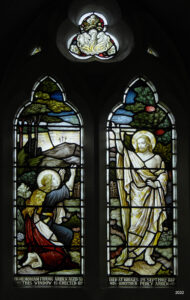 North Transept, North wall. Two-light window. The standing figure of the risen Christ, in the right-hand light greets Mary Magdalene, who kneels before him, in an enclose garden landscape. The three empty crosses are shown behind on Golgotha.

Given by Percy Arden in memory of his brother, Frank Arden (died September 1902).

Given by Percy Arden. 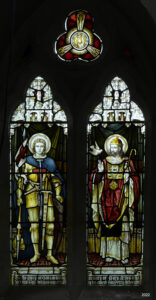 Given by Percy Arden in memory of his mother Mary Arden (died 1880).