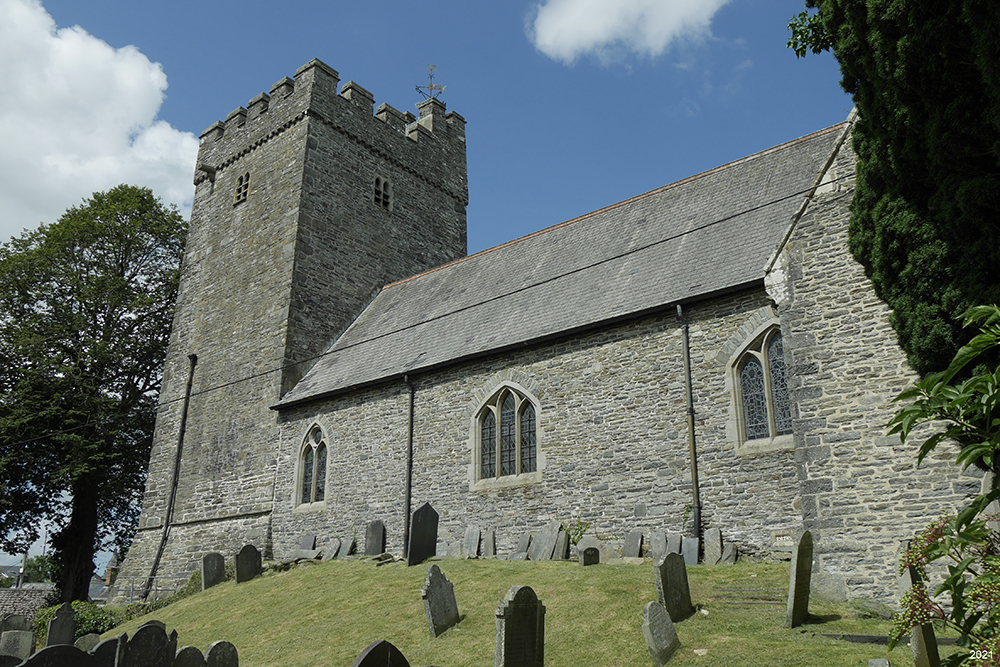 Reason for Listing: Listed as one of the best churches in the county and for its prominent location.

St Caron, Tregaron, is a 3-celled church, of medium size. It retains approximately 25% pre-19th century core fabric, confined to the west tower and the lowermost courses of the south and east walls. .

The present church consists of a 5-bayed chancel/nave, without structural division, a 3-storey west tower, and a transeptal 2-storey vestry/boilerhouse south of the chancel west bay. Construction is in local Llanddewi Brefi rubble throughout; dressings, except in the tower, are in yellow oolite, neo-gothic and from 1877. The external pointing is generally good and is later 19th – earlier 20th century; the interior is plastered except in the west tower. Roofs are slated gables; the west tower has a flat roof from the later 20th century.

The chancel is from c.1826 when it was rebuilt on the truncated remains of the medieval chancel and was substantially rebuilt, its north wall entirely rebuilt, in 1877. The east and south walls have an external basal batter up to a plain string-course, medieval but restored in 1877 when it was interrupted by a low gableted buttress. The 3 light east window has plain, uncusped Geometric tracery and is all from 1877 as is the circular light into the roof space above. There is a window in the north wall, of 3 uncusped and untraceried lights, and a single lancet in the south wall; both are from 1877; the south wall also contains the 2-centred vestry door, from 1877. The chancel is roofed continuously with the nave; the softwood roof is from 1877. All rafters have collars, arch-braced from wall corbels, and queen-posts; matchboarded above. The chancel passages are tiled, with suspended board floors in the west bay, from 1877.

The nave has been rebuilt like the chancel. It is open to the chancel without a chancel arch, but with a stepped external buttress, from 1877, on the north wall at the junction between the two. There are 2 windows in the north wall like that in the chancel north wall and similarly from 1877; the three south wall windows are the same but the westernmost is only 2-light. Roofed and floored as the chancel.

The transeptal vestry was added in 1877. It comprises 2 storeys, the lower storey housing a boilerhouse that is partly below ground. The vestry is entered through its east wall up a flight of external steps and a Caernarfon-headed doorway; there is a 2-light window in the south wall like the chancel/nave windows, and a blocked fireplace in the north wall with a plain square chimney shared with the boiler, all from 1877. The softwood gabled roof is from 1877 and without trusses, all common rafters having collars; the floor is boarded. The boilerhouse is also entered through the east wall, a  2-centred doorway, from 1877, lying below the stair landing, and is lit by an 1877 lancet in the south wall.

The medieval west tower is from c.1500, comprises 3 storeys and is typical of the region, being battered externally up to a plain string-course. A square stair turret, entered through an elaborate, 2-centred doorway with a raised oolite surround from c.1500, projects from the eastern half of the north wall and is lit by simple slit-lights. The barrel-vaulted ground floor communicates with the nave through a plain, 2-centred arch from c.1500, and features the main west door to the church which has a 2-centred surround, also from c.1500. Above the west door is a 2-light window with cusped plate tracery, an 1877 copy of an original from c.1500?. The south wall displays a line of blocked internal sockets associated with the former gallery staircase and from the later 18th century. Floored as the nave. The second storey is blind. The third storey features 2-light openings, largely rebuilt in 1877, in all four walls; the crenellated parapet lies on an external corbel table and occupies a higher level over the stair turret.

The church stands upon a possible bronze age barrow. There is neither an external drain nor cutting. A burial vault/crypt lies beneath the tower and nave west bay, its south wall forming a revetment beyond the south wall of the church. The chancel/nave floor level was raised in 1877; the floors are suspended over an underfloor void. The boilerhouse floor is below ground level. External memorials lie significantly close to the north wall.

The west tower is from c.1500. The remainder of the church was entirely rebuilt in c.1826, but on the truncated remains of the medieval church, and again partly rebuilt in 1877. There is no physical evidence for any former component beyond the present building.

A vestry decision to replace all the windows with sashes, in 1826 (ibid.), may have heralded the rebuild of the church that occurred during the first half of the 19th century. With the exception of the tower, the church was entirely rebuilt in the non-conformist tradition, but on the remains of the medieval walling, Glynne remarking c.1860 that ‘it is doubtful whether any part of the walls is original; there is, however, the trace of an original stringcourse under the windows’ (Glynne, 1897, 307). There was no distinction between nave and chancel and the whole was described as ‘cheap and nasty’ in 1861 (Anon., 1861, 311), and as a ‘poor specimen of the debased Georgian type’ (Anon., 1878, 350). The plan accompanying the faculty submission for the 1877 restoration (NLW, SD/F/658) shows a long, narrow chancel/nave, with 3 single-light sash windows in the north wall, 4 in the south wall and 1 in the east wall. The main entrance appears to have been through a door that lay at the west end of the nave south wall, with an internal lobby beneath a west gallery.

The core of the rebuilt church was fundamentally retained during the restoration of 1877, which was undertaken to the designs of the architect A. Ritchie of Chester (ibid.). The north wall was taken down and rebuilt a little to the north, the present vestry/boilerhouse was built, the south door was blocked and the church refenestrated. The tower openings were partly rebuilt. The church walls appear to have been generally rebuilt or at least refaced, and the building was reroofed, refloored, reseated and refinished.

The softwood pews are probably from the 1877 restoration. The oolite reredos and credence shelf are from 1886 (Evans, n.d., 5). The softwood chancel screen and freestanding stalls are from 1926 (NLW, SD/F/600), and the oolite pulpit may also be earlier 20th century.

An ECM was formerly built into the south wall of the church, with a 6th century Latin inscription (Various, 1994, 414). Three more ECMs, all cross incised, lay within the yard but have since been moved (ibid.).

St Caron, Tregaron, was a parish church during the medieval period (Rees, 1932), of the  medieval Deanery of Ultra-Aeron. A third of the tithes were appropriated to Strata Florida Abbey in 1339 (Evans, n.d., 3) and in 1406 the benefice, in the patronage of the Bishop of St Davids, was assigned as a prebend to the collegiate church of Llanddewi Brefi (ibid.), rated in the king’s books at £13 6s 8d (Lewis, 1833). In 1833 the living was a discharged vicarage in the patronage of the Bishop, rated in the king’s books at £8 (ibid.).

In 1998 St Caron, Tregaron, was a parish church. The living was a vicarage, held with Ystrad Meurig and Strata Florida (Benefice no. 695) in the Archdeaconry of Cardigan, Rural Deanery of Lampeter and Ultra-Aeron (St Davids, 1997-8).