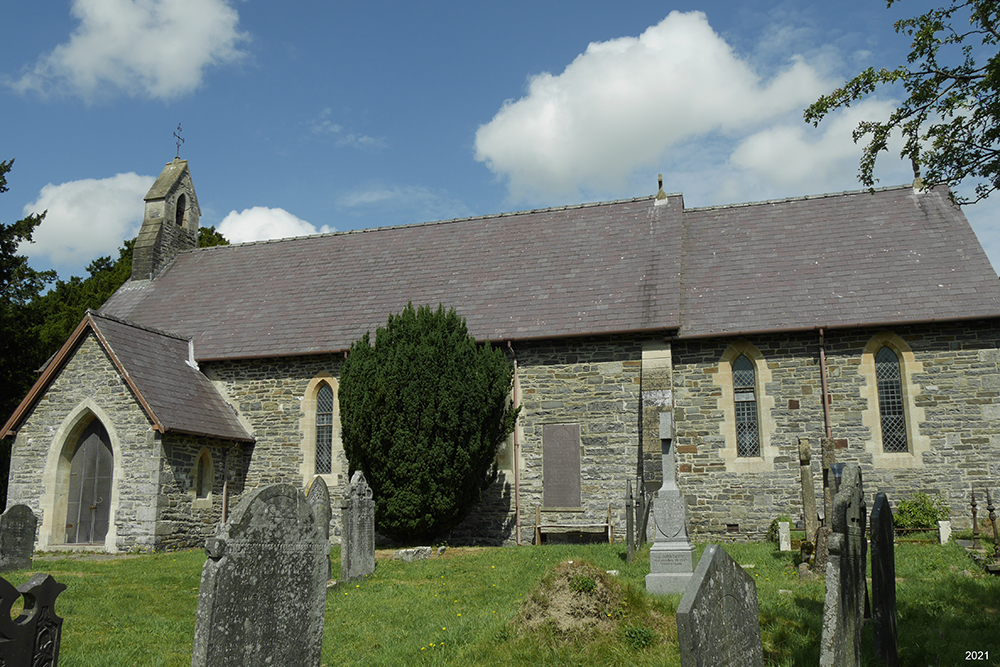 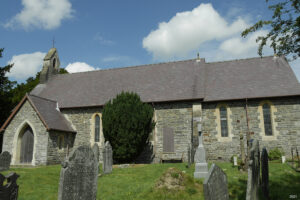 Archaeological potential – good. External earthwork platform around 40% of church; floors are suspended over an underfloor void in 90% of church; underground heating chamber in 5% of church.

St Ceitho, Llangeitho, is a 3-celled church, of small size. It was (re)built in 1821, on the same site, and in the same location as its predecessor and was extended and restored in 1899.

The present church consists of a single-bayed chancel, a 3-bayed nave, a south porch and a single-bayed vestry south of the chancel. Construction is in local Llanddewi Brefi rubble, largely refaced in 1899; the west wall is rendered externally, from the mid 20th century, and the church is plastered within. All dressings are in yellow oolite and from 1899, including the chancel arch; the openings are neo-gothic comprising simple single and triple lancets. There is limited external buttressing, from 1899. The 1899 vestry fireplace is disused, its chimney gone. A simple, gabled single bellcote lies at the west end, from 1899. The roofs are slated gables; the vestry has a slated lean-to roof. Floors are suspended except in the porch.

The medieval church possessed a timber double rood-screen, described by Meyrick in 1810 as having 3 arches and panelling with cusped, ogee-headed arches of ‘laborious but elegant gothic workmanship’ (Crossley  and Ridgway, 1946, 53), of a kind peculiar to Ceredigion.

The church was restored between 1878 and 1888 (Anon., 1878, 353; Willis-Bund, 1888, 318), but the extent of this work is unknown. In 1899 the church comprised a single-celled nave/chancel, without structural division, with a small west porch entered through west and north doors; there was also a south door into the chancel/nave (NLW, SD/F/352). The church was lit by an east window, 2 windows in the north wall and 3 in the south wall, all 2-centred, single-light and with ‘Y’-traceried timber frames. There was a western gallery.

A second restoration, and enlargement, occurred in 1899 (ibid.) to the designs of the architect William Williams of Brecon. The west porch was demolished and the west door was blocked. The south door was blocked, a new one was inserted to the west and a south porch was built. A chancel, with a chancel arch, was added to church, constructed over 2 large family vaults, and the vestry was built. The western bellcote was (re)built. It is apparent that the walls were substantially rebuilt/refaced. The church was reroofed, refloored, reseated and replastered. A Porritt’s underground heating apparatus was installed.

There is an external earthwork platform around the north walls of the church. Floors are suspended over an underfloor void. There is an underground heating chamber.

St Ceitho, Llangeitho, was not a parish church during the medieval period (Rees, 1932), but a chapelry of the medieval Deanery of Ultra-Aeron. It appears to have been in the patronage of the Bishops of St Davids.

Llangeitho had become a parish by 1833 when the living, a discharged rectory rated in the king’s books at £6 and endowed with £200 royal bounty, was in the patronage of the bishops (Lewis, 1833).

In 1998 St Ceitho, Llangeitho, was a parish church. The living was a rectory, held with Blaenpennal, Gartheli and Betws Leucu (Benefice no. 697) in the Archdeaconry of Cardigan, Rural Deanery of Lampeter and Ultra-Aeron (St Davids, 1997-8).