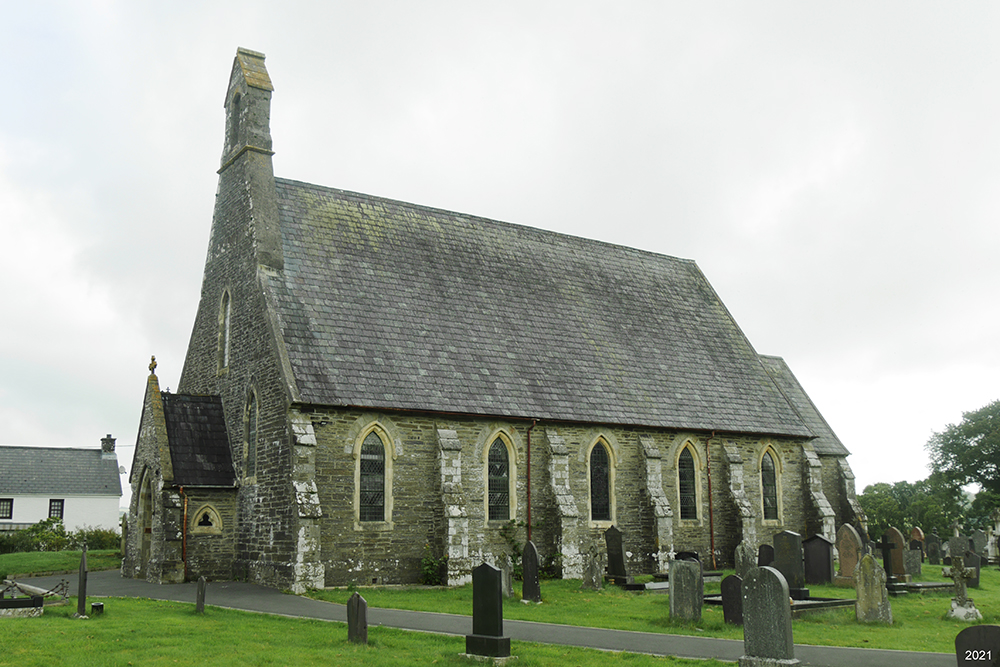 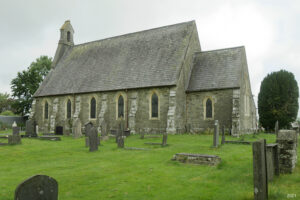 A 2-cell church, medium-sized. Consists of chancel, 2 bays; nave, 5 bays; west porch; vestry/store (north), 2 bays; all 1858. Construction is in slate rubble. Slate gable roofs; the vestry/store has an internal dividing wall and a slate lean-to roof. All openings from 1858 and neogothic, in yellow oolite; the exterior is buttressed and there is a western single bellcote, 1858.

Archaeological potential – good. No external drain or cutting. Suspended floors in 90% of church.

St Celer, Llangeler, is 2-celled church, of medium size. It was (re)built in 1858, on the same site, and in the same location as its predecessor (PRN 2278), retaining nothing from the earlier fabric.

The present church consists of a 2-bayed chancel, a 5-bayed nave, a west porch and a 2-bayed vestry/store north of the chancel. Construction is in roughly coursed local slate rubble; the interior is plastered. All dressings are in yellow oolite and from 1858. The openings are neo-gothic comprising simple single or triple lancets. The exterior is buttressed throughout. The vestry is divided from the store by an internal wall. A simple, gabled single bellcote lies on the west end, from 1858. The roofs are slated gables; the vestry/store has a slated lean-to roof. The floors are suspended except in the porch.

The earlier church was, in 1833, described as a plain neat edifice… not distinguished by any architectural details of importance’ (Lewis, 1833), when it had recently been reseated with the addition of 380 sittings. In a comprehensive account of 1850 it consisted of a chancel, a nave, and a south chapel (Glynne, 1898, 358). The south chapel was called ‘the new church’ in the early 17th century (RCAHM, 1917) when it was said to house the ‘sepulchre’ of St Celer, represented by a very deep tomb of freestone. The chapel occupied the full length of the chancel, and the eastern 2 bays of the nave from which it was divided by an arcade of ‘rude pointed arches’ (Glynne, op. cit.); it was entered through a south door. There was a square-headed, 3-light ?16th century window in the chapel east wall, and ‘some unsightly sash windows’ in the north walls. Over the nave west door was a shallow niche, above which was a double bellcote. The exterior was whitewashed.

The church was entirely rebuilt in 1858 to the designs of the architect Charles J. Davies (Clive-Powell, 1992, 1). There appear to have been no further major alterations, but a hot-water heating apparatus and boiler were installed in 1928 (NLW, SD/F/355).

There is neither an external drain nor a cutting. Floors are suspended in the chancel, nave and vestry.

St Celer, Llangeler, as ‘Merthyr Celer’, was a parish church during the medieval period (Rees, 1932), of the medieval Deanery of Emlyn, and in the patronage of the Lords of Emlyn.

In 1998 St Celer, Llangeler, was a parish church. The living was a rectory, held with Penboyr (Benefice no. 835) in the Archdeaconry of Cardigan, Rural Deanery of Emlyn (St Davids, 1997-8).