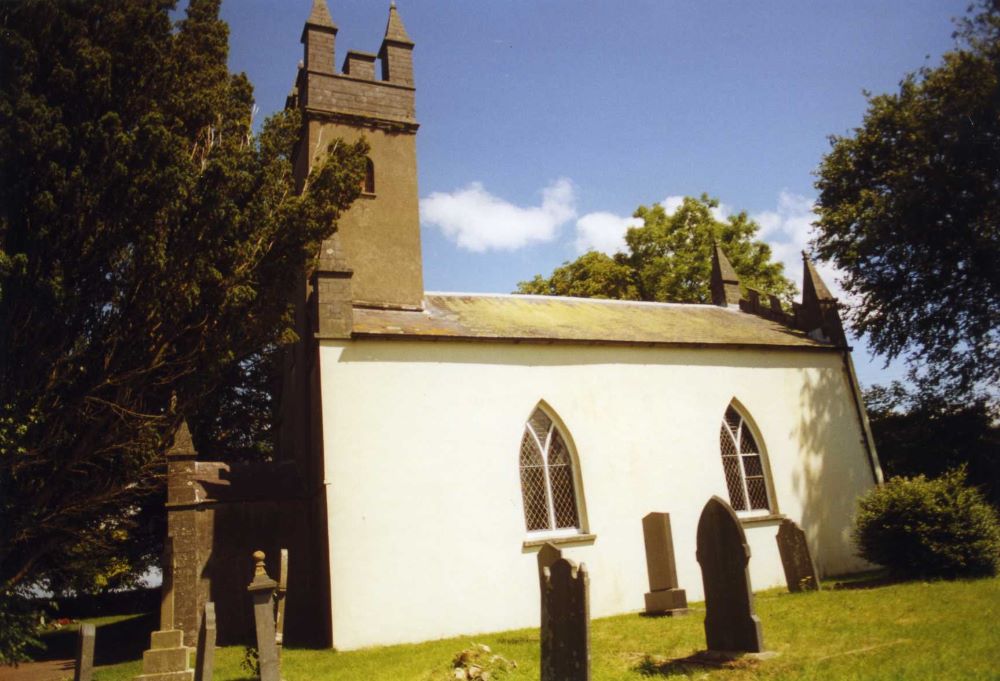 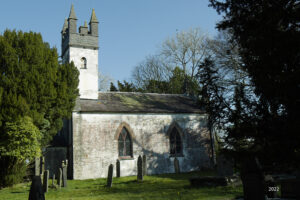 Reasons for listing: None given.

A 2-cell church, small. Consists of chancel/nave, 2 bays; west porch; west turret over chancel/nave; all 1835-7. Vestry (north), 20th century. Construction is in limestone and slate rubble, and slate ashlar. Neo-gothic. All internal walls are rendered/plastered. Slate gable roofs; the vestry with a slate lean-to roof. West turret buttressed and pinnacled, 1835-7. Openings are mainly from 1835-7 and include the west doorway; one window is from 1895 and all timber window frames were renewed in 1895.

St Colman, Capel Colman, is a 2-celled church, of small size. It was (re)built in 1835-7 by the architect Daniel Davies (A. Gordon, 1993), in the same location as its predecessor but retaining none of the earlier fabric.

The present church consists of a 2-bayed chancel/nave, a western turret over the west bay, a west porch and a later lean-to vestry against the east bay north wall. Construction is in medium-sized limestone and slate rubble, unsquared but roughly coursed, with squared quoins; the west porch and turret are in slate ashlar; all is in early 19th century ‘Estate Chapel’ style, broadly neo-gothic. There is external pointing of the 19th century, but the turret and vestry have 20th century pebbledash render. The internal walls are rendered/plastered, partly replastered in 1895. The west turret is buttressed and pinnacled in slate ashlar, 1835-7; there are no further mouldings. All openings, except in the vestry and the window high on the north side of the chancel/nave, are from 1835-7 and include the west and porch doors; all have simple 2-centred heads, the windows featuring oak frames with Y-tracery from 1895. The chancel/nave is roofed continuously as a slated gable, with a suspended ceiling, of 1835-7, while the vestry has a slate lean-to roof up to the eaves of the east bay; the turret roof was not seen. Internally, the timber west gallery survives from 1835-7, and is Classical in style.

The church was restored in 1895, under the architect R. Thomas of Cardigan (NLW, SD/F/76). The restoration was low-medium impact. The church was refloored, with tiles in the east bay and suspended woodblock flooring in the west bay; the west porch was tiled directly onto the substrate. A new window was opened high on the north wall of the west bay and the present window frames installed throughout (see above). The interior was partly replastered. The present oak seating, pulpit, desk and alter rail were installed. The present font was fitted.

Some subsequent work has been performed. The pebbledash surfaces (see above) are 20th century, while the northern lean-to vestry is a 20th century addition.

There is no structural or physical evidence for the earlier church. However, an earthwork mound/bank lies immediately north-west of the church, of unknown origin; is it funerary? prehistoric? or merely debris?. A very shallow external drain runs all around the church, from 1835-7? or 1895?. A deeper below-ground drain of the 1990s runs around the east wall. There is no evidence for internal floor level changes. An underfloor void was excavated in 1895. No vault or crypt is evident. There is no evidence for former components beyond the present church walls. Some memorials are significantly close to the east end of the church.

St Colman, Capel Colman, was not a parish church during the post-conquest period, but a chapelry of the medieval Deanery of Emlyn (Rees, 1932). It is mentioned in 1394 as ‘Llangolman’ when it was held with the chapel of Cilfowir in Maenordeifi parish (Green, 1911, 260), as it still was in 1492. The living appears to have been a perpetual curacy (ibid.).

Capel Colman was in royal hands in 1594, but it may have been, during this period, temporarily abandoned (ibid.). It certainly had been by 1721 (ibid.; see above). In fact no presentations appear to have been made to the incumbency between 1501 and 1772, when the curate was presented by the local squire Owen Brigstocke, and the chapel was united with Llanfihangel Penbedw. Its tithes and ancient endowments had, during the intervening period, presumably all been seized by the crown, but the church has been gradually re-endowed and by 1833 the living, in the Archdeaconry of St Davids and the alternate patronage of the Brigstocke family and a Major Bowen, was endowed with £800 royal bounty (Lewis, 1833). Capel Colman had become a parish church by now.

In 1998 St Colman, Capel Colman, was a parish church. The living was a vicarage, held with Maenordeifi, Llanfihangel Penbedw, Clydau, Penrhydd and Castellan (Benefice 805), in the Archdeaconry of Cardigan, Rural Deanery of Cemais and Sub-Aeron (St Davids, 1997-8).