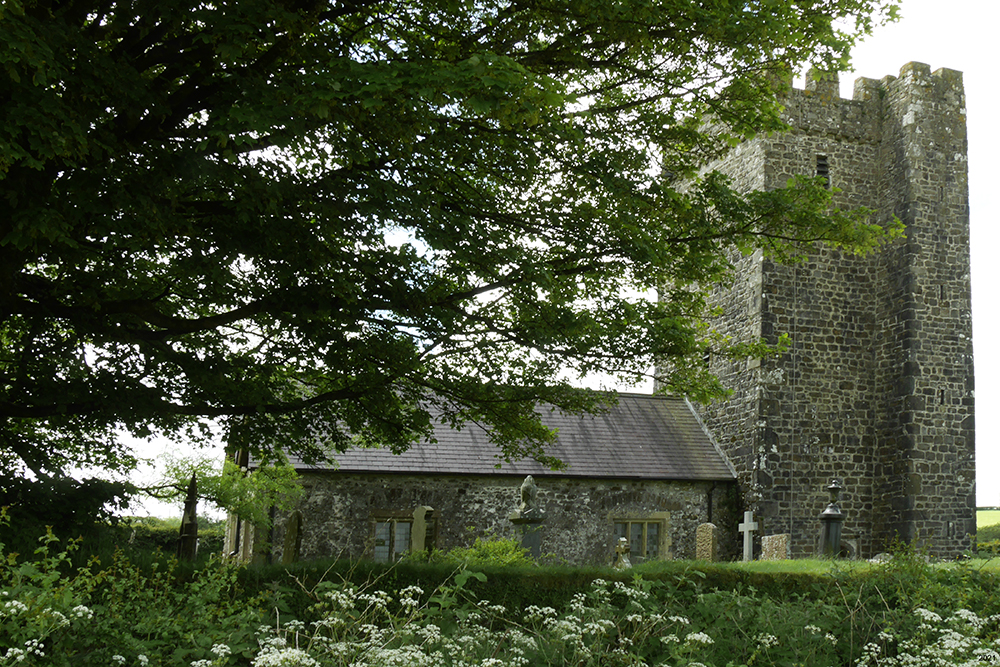 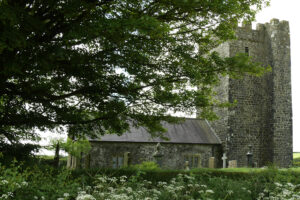 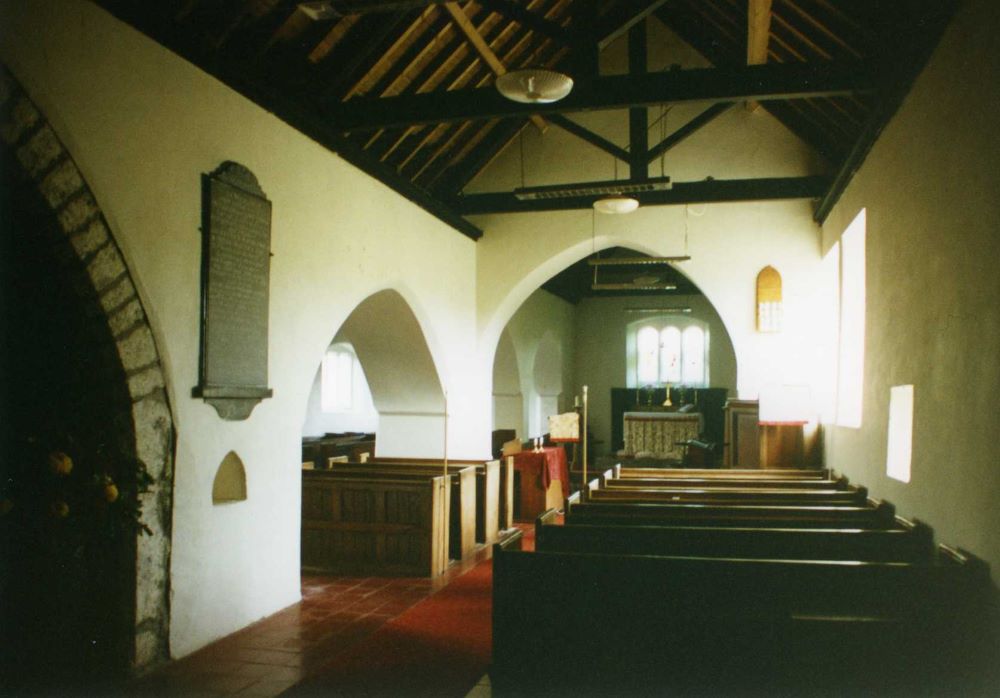 Reason for Listing: Graded II* as a substantially medieval church with massive C15 tower and some unusual earlier C18 alteration.

Archaeological potential – good-very good. Shallow-deep, wide earth cutting around 100% of church, primary but secondarily deepened exposing footings in 50% of church; former components beyond 15% of church?; floor lowered in 10% of church, exposing internal footings?; suspended floors over a void in 50% of church.

The present church consists of a 2-bayed chancel, a 2-bayed nave, a 3-bayed north aisle, and a 4-storeyed tower west of the north aisle. Former south transept and west porch?. Construction is in limestone rubble. There are medieval and 18th century dressings, in limestone; other dressings are in yellow oolite, neo-gothic and largely from 1890-91. There are some remains of 18th – early 19th century external render, and pointing mainly from 1890-91. The interior is plastered, 1983. Roofs are slated gables; the tower roof was not seen..

The 3-light chancel east window is uncusped, in late Perpendicular style with a square surround, and all from 1890-91 in imitation of the tower openings. The plain, 2-centred chancel arch is probably 14th century; to the south is a contemporary, plain square squint. The chancel has a softwood roof from 1890-91, with tie-beam trusses with king- and princess-posts, and matchboarding. The quarry-tiled floor is from 1891.

The upper quarter of the nave south wall was rebuilt (and heightened?) in 1890-91. The south wall of the nave west bay was rebuilt in the mid-late 18th century as a thicker area of rubble pierced by 2 contemporary semicircular-headed windows with limestone ashlar jambs and voussoirs, and plain imposts.  To the west is a low, square-headed simple light, medieval, 13th century?. The plain south door has a rounded 2-centred head that is probably also 13th century. The west wall carries a large, elaborate double bellcote, probably fundamentally 14th century but much restored in 1890-91. It is gabled, with 2 segmental-headed openings, but preserves the body of an earlier bellcote with 2 semicircular-headed openings, from the 13th century?. The plain west door below also has a semicircular head, probably from the 13th century. The nave is roofed like the chancel, 1890-91. The passages are quarry-tiled as the chancel, with suspended woodblock floors, also from 1890-91.

The north aisle communicates with the nave and chancel through a 3-bayed arcade of 2-centred arches, on plain, chamfered square piers with chamfered impost offsets, 15th century. The east wall is demonstrably secondary to the chancel and there is a vertical joint between the two; however, the location of the joint suggests that the aisle wall was built against a buttress on the north side of the chancel east end. The 3-light east window is like the chancel east window and similarly from 1890-91, with surrounding infill; there are 2 similar windows in the north wall, of which the upper quarter is from 1890-91, like the nave. The aisle is roofed like the nave and chancel, 1890-91. The passage was flagged in 1890-91, possibly re-using earlier flags; the floors are woodblock as the nave, from 1890-91.

The west tower is from the mid 16th century and comprises 4 storeys, but is low. It is of roughly squared and coursed rubble and marked late Perpendicular character. It has the external batter up to a string-course typical of the region. A square spiral stair turret projects from the west half of the north wall, entered through a plain 4-centred doorway and lit by simple loops. The ground floor communicated with the nave through a plain, rounded 2-centred arch, 16th century, which was blocked with a thin, rendered wall featuring a plain square doorway in 1966; to the east of the arch is a stoup comprising a plain, 2-centred recess and bowl, possibly part of the 13th century nave north wall. There was a similar arch into the west bay of the north aisle, also blocked but with ?early 19th century blocking. The tower was entered from the exterior through a doorway in its north wall; it has a 4-centred head in a chamfered, square surround with a drip-mould, all 16th century. There is a 2-light window in the west wall with 4-centred, uncusped lights in a similar surround and drip-mould, also from the 16th century. The tower is now open internally to the roof, all former timber floors having been removed, but corbelling for the floor survives on all 4 walls. The floor is quarry-tiled as the nave and chancel, 1890-91. The second storey is blind, but the third storey is lit by a simple single light with a square surround, 16th century. The south-east corner of these upper stages has been repaired during the 20th century. The belfry stage has single, square openings with simple surrounds, from the 16th century, in all 4 walls. The crenellated parapet lies on a corbel table, all from the 16th century but the crenellations have rebuilt copings.

A shallow-deep, wide earth cutting runs around the church; it is primary but appears to have been deepened in the 15th century when the aisle was added exposing the nave and chancel footings, and deepened again in 1890-91 exposing the aisle footings in areas. A south transept, and west porch, may formerly have been present. Part of the nave floor may have been lowered; internal footings may be exposed at the west end of the nave. Floors are suspended over a void in the nave and aisle. No external memorials lie significantly close to the church.

The nave openings suggest a 13th century date. The present nave bellcote is probably 14th century, pre-dating the tower that supplanted it and preserving an earlier, ?13th century bellcote suggesting that the nave was heightened in the 14th century – when the chancel was added? (There is a similar bellcote, similarly supplanted by a later tower, at Pembrey, Carms.). The rebuilt wall around the nave south window may represent the site of either a former transept or rood-stair (Yates, 1974, 71), and there may have been a west porch (see below). The north aisle is considered to be 15th century (Yates, 1974, 71 et al.). The tower detail is late Perpendicular and from the mid 16th century, but before 1552 (see below); any resemblence to the tower at Marros, part of the same medieval benefice, is purely superficial.

In 1869 the church was described much as it exists today (Glynne, 1898, 366); the 16th century character of the tower was noted, and the ‘few’ windows in the church had been ‘modernised’. Drawings from 1890 show the pre-restoration church (NLW, SD/F/206). The present south and west doors are shown, and the 18th century nave south windows; similar, single-light 18th century windows lit the chancel and aisle east walls, and there was a further single-light window in the aisle north wall. There had evidently been more than one window on the north side of the church in 1720, when ‘one of the windows on the north side’ was ‘out of repair’ (Evans, 1921, 7). The tower arches, and the west window, are shown as blocked in 1890, but in a drawing of 1887 the window was a 2-light Perpendicular window with a square surround much as the present window. In the same drawing can be seen the scar of a west porch, but the west door is shown as blocked (open again by 1890); a blocked, 2-centred window opening lay above. The valleys at both the east and west gable ends were closed off with masonry. The floors were flagged, and the roofs, which had been renewed c.1870, were described 20 years later as ‘poorly constructed’ (Anon., 1890, 157-8).

The church was restored in 1890-91 (NLW, SD/F/206), to the designs of the architects Middleton, Prothero and Phillot, of Cheltenham. It was refenestrated, but the nave south windows, doorways, tower openings and chancel arch were retained. The nave walls were heightened and the bellcote restored. The arch between the tower and the nave was unblocked and given a timber screen. The church was reroofed, refloored, replastered and reseated.

The softwood stalls, pews and pulpit are from 1890-91 (ibid.). The tower screen was removed in 1966 and replaced by the present screen wall (Houseman, 1986). The church was superficially renovated in 1982-3 (ibid.), including internal replastering.

The limestone font has a square bowl, stem and base, possibly medieval but retooled (RCAHM, 1917, 20).

St Cyffig, Cyffig, was a parish church during the medieval period (Rees, 1932), of the medieval Deanery of Carmarthen. ‘Lann Ceffic’ is mentioned in the ‘Book of Llandaff’ (Houseman, 1986), compiled in the mid 12th century.

By 1563 the church, with that at Marros, had become a chapel-of-ease to Laugharne parish church (ibid.). It became a parish church in 1777 and in 1833 the living, a perpetual curacy consolidated with that of Marros, was endowed with £600 royal bounty; £8 per annum was contributed by the Vicar of Laugharne, who held the advowson (Lewis, 1833).

In 1998 St Cyffig, Cyffig, was a parish church. The living was a vicarage, held with Whitland, Henllan Amgoed and Llangan (Benefice no. 826) in the Archdeaconry of Carmarthen, Rural Deanery of St Clears (St Davids, 1997-8).