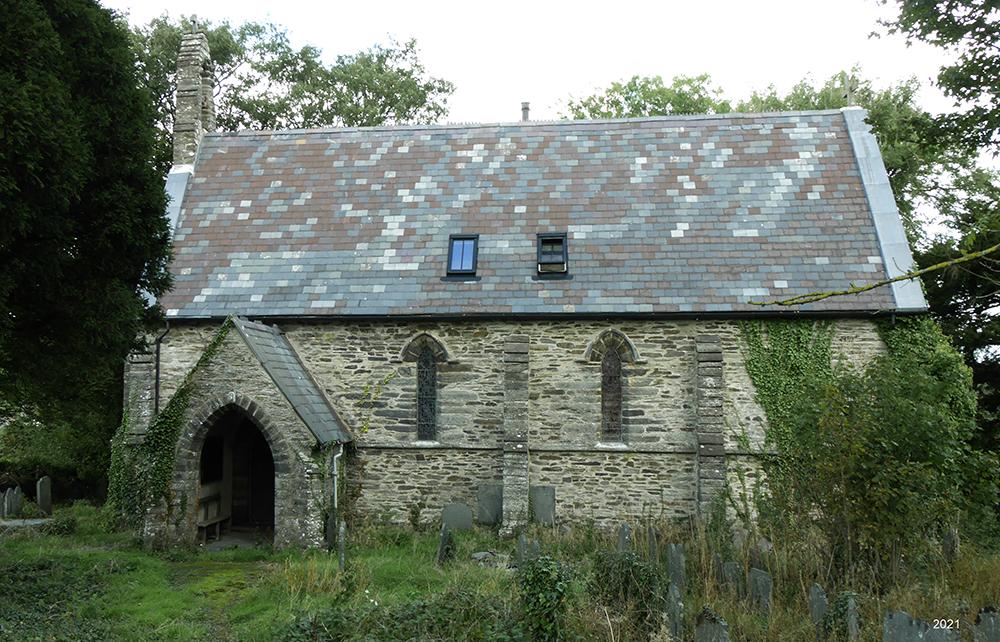 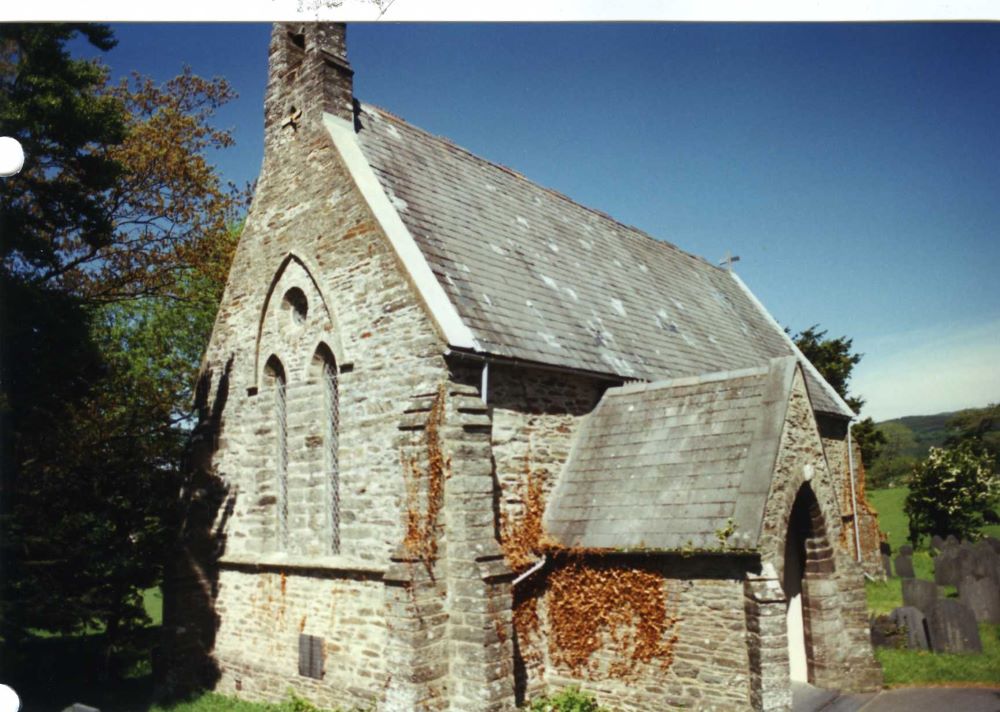 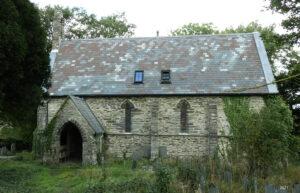 Reasons for Listing: Included as an early attempt in the region at correct Gothic design, possibly designed by Bishop Basil Jones, with contemporary fittings.

Note September 2021: Building locked up, however, it appears to have gone through some change of purpose. A new slate roof, with dormer windows. The churchyard extremely scruffy and the building surrounded with the slate debris from the old roof. Possibly still work in progress.

The present church consists of a four-bayed chancel/nave, without structural division, a single-bayed north transept, a south porch, and a boilerhouse with a coal cellar added north of the nave in the early 20th century. Construction is in local shale rubble. Openings, except in the transept, boilerhouse and coal cellar, are neo-gothic and from the mid-late 19th century but lack dressings; the east, west and south wall exteriors have contemporary stepped buttresses and feature a contemporary plain basal offset and roll-moulded string-course. There is extensive 20th century repointing; the interior is plastered. Roofs are slated gables; the boilerhouse has a slated lean-to roof while the coal-cellar has a concrete flat roof.

The low north transept lacks the external buttressing, offset and string-course. It communicates with the nave through an almost triangular 4-centred arch, from the 17th century?, contemporary with the roof?. It is lit by a single lancet with a contemporary chamfered surround in the north wall. Roofed as the chancel/nave, 17th century, with a pre-19th century slate ‘flag’ covering. The floor is slate-flagged, from the 19th century. The transept is now used a vestry.

The boilerhouse lies between the nave north wall and the north transept west wall and is of simple construction with a slate-lintelled door in the north wall. The earth floor is below churchyard ground level. Adjoining its west wall is a coal cellar from the mid 20th century which is largely below ground; the walls and flat roof are of concrete, the latter featuring a hatch.

The church is associated with a number of external features. A ‘D’-shaped earthwork and parch mark lies immediately east of, and is the same width as, the chancel east wall, structural?, cut by a burial from 1861. The north transept west wall line continues northwards for 1m as a pronounced bank, structural?, while the line of the transept body continues northwards as a depression, with very pronounced earthworks to the east and west, which may be partly natural but continue westwards as a platform; that to the east is occupied by 3 mid 19th century burials and may have been secondarily truncated. A shallow external drain runs along the south wall. The floor is suspended over an underfloor void in the chancel/nave and transept. The boilerhouse has a below-ground floor while the coal cellar is all below ground. Few external memorials lie significantly close to all walls.

The chancel/nave may be medieval at core but cannot be closely dated. The south porch has been rebuilt on the site of a medieval porch. The transept and roof-trusses are probably contemporary, from the first half of the 17th century. The boilerhouse and coal cellar are earlier 20th century.

The church was described in 1810 as comprising ‘simply a nave’, but the porch is then mentioned and featured an ‘ancient pointed arch’ (Crossley and Ridgway, 1946, 51); the tithe map of 1844 shows the church with the present ground plan (NLW, Llangynfelyn, 1844). Inside were the remains of a carved rood screen, a fragment of which still remained in the church in 1918 and may not have been of local manufacture (Crossley and Ridgway, 1946, 51).

The church was in a ‘very dilapidated condition’ in 1833 but was ‘about to be restored’ (Lewis, 1833). However, the restoration was not apparently undertaken until 1845 (Anon., 1914, 36). At least some medieval timber window frames appear to have survived this restoration, and the head of a 2-light Perpendicular window was in private possession in 1878 (Anon., 1878, 335). The church may have been restored again prior to 1878 (Anon., 1878, 335). During restoration the church received its present fenestration, floors and external detailing (buttresses, offset and string-course); it is apparent that the south, east and west walls were refaced at the same time, and the south porch rebuilt.

The softwood pews, panelled dado, vestry screen and pulpit are possibly all mid-late 19th century. The oak reredos including the panelled dado is dated 1918.

The oolite font has an octagonal bowl and base, but no stem, and is from the 13th-14th century.

Documentary sources for the medieval church have the separate PRN 5431.

St Cynfelyn, Llangynfelyn, was not a parish church during the medieval period (Rees, 1932), but a chapelry of the medieval Deanery of Ultra-Aeron.

Llangynfelyn had become a parish by 1833 and the living, a perpetual curacy, was in the patronage of the Devonshire Chichester family (Lewis, 1833).

In 1998 St Cynfelyn, Llangynfelyn, was a parish church. The living was a vicarage, held with Borth and Eglwys-fach (Benefice 674) in the Archdeaconry of Cardigan, Rural Deanery of Llanbadarn Fawr (St Davids, 1997-8).