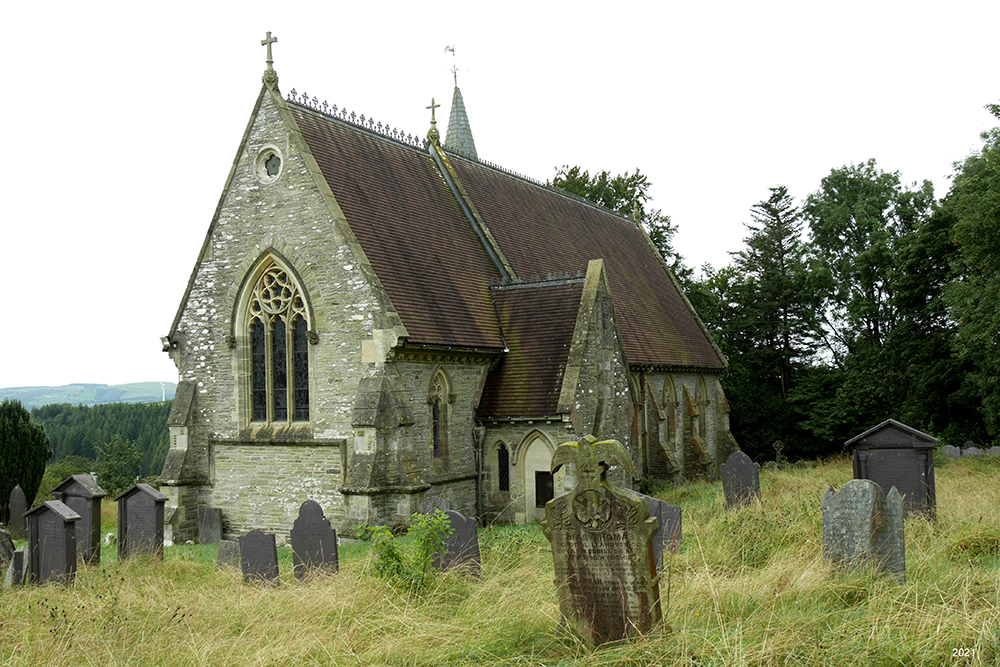 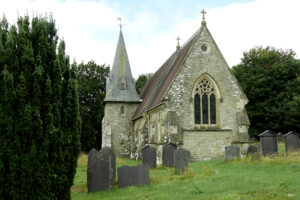 Reason For Listing: Graded II* as the best example in S.W. Wales of a High Victorian estate church, with exceptional polychrome interior and carved work.

Construction is in limestone rubble throughout. Neo-gothic. Tiled gable roofs; vestry with tiled lean-to roof and tower with slated timber broach spire. All openings are from 1870 except vestry openings which are from 1897.

St Cynllo, Llangynllo, is a 5-celled church, of medium size. It was entirely (re)built in 1870 to the designs of John Middleton FRIBA at a cost of £2000 (Clive-Powell, 1996). The church was built in the same location, and on the foundations as its predecessor, which itself was a rebuilt church of 1810 (ibid.),  but nothing was retained from the earlier fabric (Dyfed PRN 12665). The present vestry was added in 1897 (NLW, SD/F/389) to the design of E. V. Collier, of Carmarthen.

The present church consists of a 2-bayed chancel, a 4-bayed nave, a 2-storey tower south of the nave, incorporating a porch, a single-bayed transeptal organ chamber (formerly vestry) north of the chancel west bay, all of 1870, and a lean-to vestry south of the nave west bay, from 1897. Construction is in limestone rubble throughout. The external pointing is largely from 1870. There is extensive external buttressing. Dressings are in oolite and from 1870; the 2-centred openings are neo-Gothic and some display complex tracery. The south tower has 2 storeys, with plain lancets, and has a disused semi-octagonal spiral stair turret to the upper storey. Internally, fine High Victorian character including polychrome banding, ornate chancel arch with carved angels, pulpit with marble ornament and diapered reredos. The roofs are red-tiled gables; the vestry has a lean-to roof and the tower has a timber broach spire with a slate covering.

The east end of the church appears to lie on a platform which may be primary. A shallow, earth cutting lies along the north wall, and a below-ground plinth, beneath which may lie a drain, runs around the church. A below-ground heating chamber lies beneath the organ chamber. There is an underfloor void beneath the suspended floors. An external vault/crypt lies against the west wall.

The church of 1810 is depicted in the tithe map of 1842 (NLW, Llangynllo, 1842) and was described in 1833 as a ‘neat edifice…rebuilt at the sole expense of the late proprietor of the Bronwydd estate’ (Lewis, 1833).. The tithe map is of unusual accuracy and appears to depict a church comprising chancel, nave, south porch (and tower?), and a component north of the nave west bays; it is not known how closely it followed the line of the pre-1810 church.

St Cynllo, Llangynllo, was a parish church during the medieval period (Rees, 1932), of the medieval Deanery of Sub-Aeron. The benefice was in the ‘gift of the Welshry’ (ibid.); in fact it was in the patronage of the freeholders of the parish and  a presentation to the living was recorded in 1710 when it was a rectory (Anon., 1924, 401-3)

In 1833 the living was a discharged rectory in the patronage of the parish freeholders, in the Archdeaconry of Cardigan; it was rated in the king’s books at £6 13s 4d (Lewis, 1833).

In 1998 St Cynllo, Llangynllo, was a parish church. The living was a rectory, held with Bangor Teifi, Henllan and Llanfair Orllwyn (Benefice 693) in the Archdeaconry of Cardigan, Rural Deanery of Emlyn (St Davids, 1997-8).