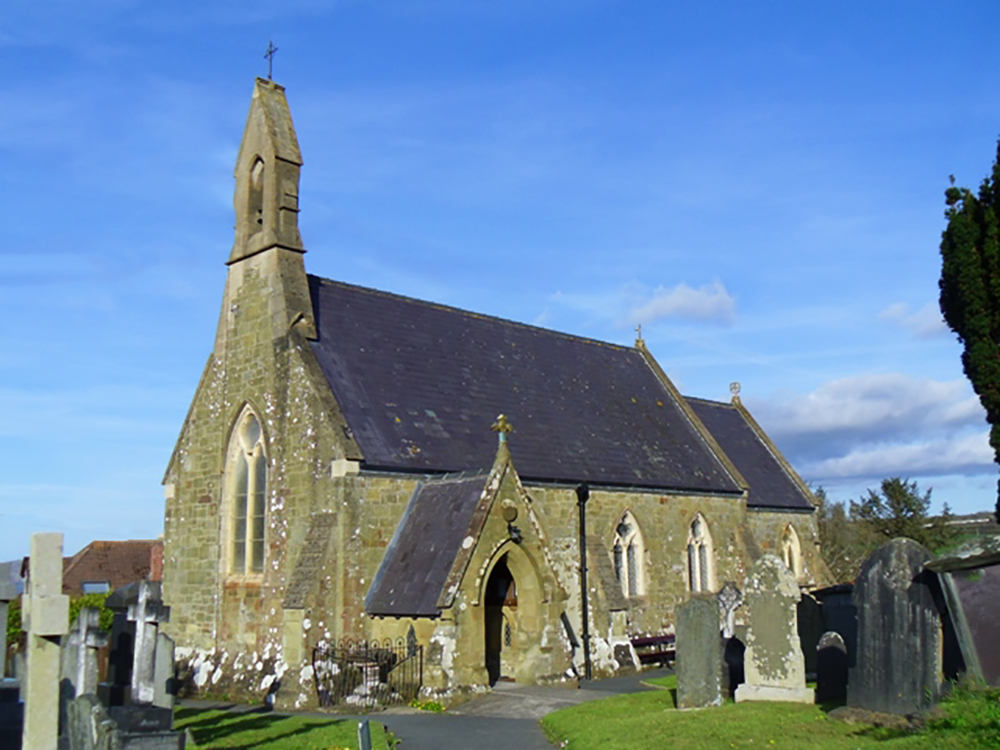 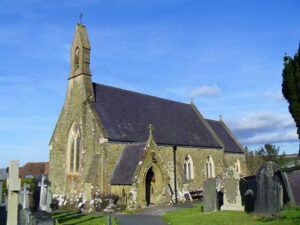 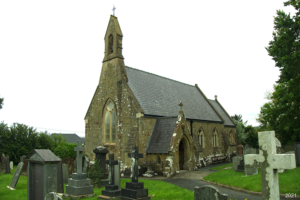 Reason for Listing: Included as a good small Victorian Gothic church, the first by R J Withers in Cardiganshire.

St Cynwyl, Aberporth, is a 3-celled church, of small-medium size. It was entirely (re)built in 1855-7 on the same site, and on the foundations of its predecessor, but nothing was retained from the earlier fabric.

The present church consists of a 2-bayed chancel, a 3-bayed nave, a south porch, a single-bayed vestry north of the chancel east bay, and a boilerhouse east of the vestry. Construction is in squared Pwntan sandstone; the boilerhouse is rendered externally and may be of brick. All dressings are in yellow oolite and from 1855-7; the 2- and 3-light windows are cusped, with simple tracery. The exterior is buttressed throughout. There is a simple, shouldered gabled single bellcote at the west end. The boilerhouse has a simple chimney. The roofs are slated gables; the vestry and boilerhouse have slated lean-to roofs. The floors are suspended except in the porch and boilerhouse.

The earlier church was described as ‘a small plain structure of great antiquity’ (Lewis, 1833), of the ‘commonest Welsh type’ (Glynne, 1898, 354). It comprised a chancel and nave of the same general dimensions as the present church, without external structural division but with a ‘pointed’ chancel arch. The windows were ‘modern’ but the west door was medieval. There appears to have been a tomb recess in the north wall, described as a ‘sepulchral arch’ by Glynne. The roof was open and of ‘not bad timber work’. A large bellcote (with a spire?) lay at the west end.

The church was entirely rebuilt in 1855-7 to the designs of the architect R. J. Withers, of London (Cadw, 1996, 3). The boilerhouse, and heating flues were added in the earlier 20th century. There appear to have been no major further alterations.

The font is 19th century. The font present in 1833 had a square bowl on a cylindrical stem (Lewis, 1833) and is undoubtedly represented by the font now mounted in the churchyard next to the south porch, of late medieval date (Anon., 1914, 19).

A slight external platform runs along the north wall, with a square angle around the north-east corner, probably constructional, primary? 1855-7?.  There is neither an external cutting nor a drain. Internal floor levels raised above ground level; floors are suspended over heating ducts in the nave and vestry. External memorials lie significantly close to the north, west  and east walls.

In 1998 St Cynwyl, Aberporth, was a parish church. The living was a rectory, held with Blaenporth, Tremain and Betws Ifan (Benefice no. 833) in the Archdeaconry of Cardigan, Rural Deanery of Cemais and Sub-Aeron (St Davids, 1997-8).