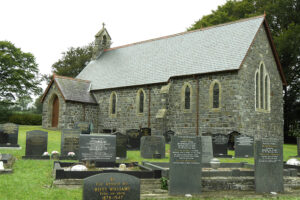 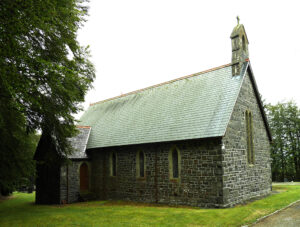 19th century church; 0% pre-19th century core fabric. On general site of, but not in same location as, medieval church.

St David, Blaenpennal, is a 3-celled church, of small size. It was new built in the late 19th century, c.200m to the west of its predecessor (PRN 5225). Nothing was retained from the earlier fabric

The present church consists of a 2-bayed chancel, a 3-bayed nave, a south porch and a single-bayed transeptal vestry north of the chancel. Construction is in local, roughly coursed rubble. All dressings are in yellow oolite and late 19th century; the openings are neo-gothic, the lights all being simple lancets, normally single but with double-lancet east and west windows. There is limited external buttressing. There is a gabled single bellcote at the west end. The roofs are slated gables throughout. The floors are suspended except in the porch.

The earlier church is shown on the tithe map of 1842 (NLW, Blaenpennal township, Tithe Map, 1842). The church lay within a churchyard that was considerably smaller than at present, comprising only the south-eastern quarter of the present yard, which may have formed an outer enclosure. The church itself lay c.200m east of the present building, in a sloping area of the churchyard which is densely occupied by memorials but very overgrown in 1996; no physical evidence for the earlier church was apparent.

The present church was built in the late 19th century within the former ?outer enclosure of the yard, c.200m west of the old church. It appears to be more-or-less unaltered.

There is a shallow, concrete external drain all around the church. A slight external, oval earthwork lies along the north and east walls, constructional?. The floors are suspended over heating ducts. No external memorials lie significantly close to the church.

St David, Blaenpennal, was not a parish church during the medieval period but a chapelry of Llanddewi Brefi parish (Rees, 1932), of the medieval Deanery of Sub-Aeron. Blaenpennal was an episcopal grange of St Davids.

Still a chapelry in 1833, the living was a perpetual curacy in the patronage of the Perpetual Curate of Llanddewi Brefi (Lewis, 1833), endowed with £800 royal bounty and £200 parliamentary grant. Burial rights had been acquired by the earlier 19th century.

In 1998 St David, Blaenpennal, was a parish church. The living was a vicarage, held with Llangeitho, Gartheli and Betws Leucu (Benefice no. 697) in the Archdeaconry of Cardigan, Rural Deanery of Lampeter and Ultra-Aeron (St Davids, 1997-8).

The dedication to St David may result from its subordination to Llanddewi Brefi and St Davids rather than suggesting a pre-conquest origin.