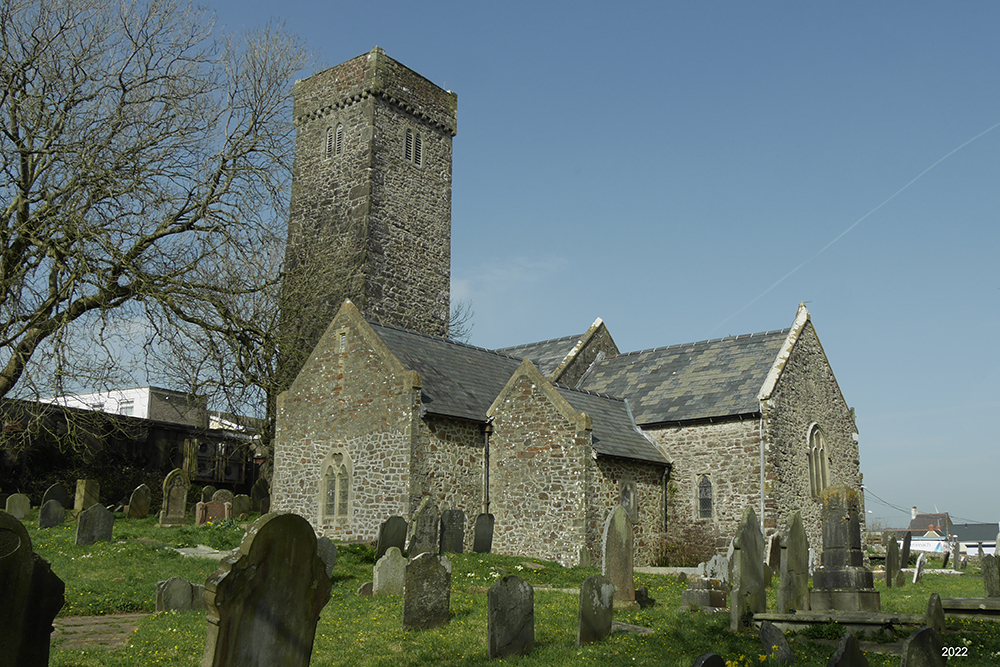 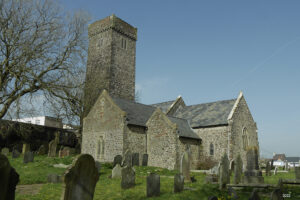 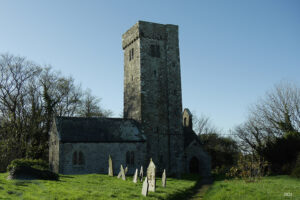 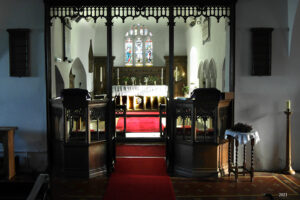 Reasons for Listing: Listed as C15 Church that stands in churchyard extensively filled with late C18 to C20 memorials. Rubble retaining wall and 1930 lych-gate to N.

St David, Hubberston, is a 7 (or 8) celled church, now cruciform, of medium size. It retains approximately 80% pre-19th century core fabric from its original from.

The present church consists of a medieval 2-bayed chancel, a wider 3-bayed nave, and a 5-storey west tower. A vestry north of the chancel west bay, an organ chamber south of the chancel west bay, a north transept, a south transept and a north porch, all single bayed, transeptal and conjoining, were added in 1929-31. The medieval fabric is medium-large Old Red Sandstone and limestone rubble, unsquared and uncoursed, with crude quoins. The 1929-31 work is in medium-sized roughly coursed limestone rubble. 1929-31 cement ribbon pointing throughout (undergoing repointing in 1998); internal render/plaster, 1929-31. Roofs are slated gables, the nave always roofed at a higher level; the west tower roof was not seen.

The chancel east window has 3 cusped lights and simple Perpendicular tracery in a 2-centred surround with a drip-mould, all in limestone and from the early 16th century; an internal corbel at sill level may be associated with a former altar-beam or statuary. The east bay south wall is pierced by a window with a segmental rear-opening, post-medieval?, containing a cusped lancet with a square limestone surround with sunk spandrels, from c.1500 but probably relocated (see below). Internally is a piscina with a 2-centred recess and a polygonal bowl, Decorated in style and late 14th century; to the west is a triple sedilia, of 2-centred arches, with hoodmoulds, on octagonal shafts with moulded bases, similarly late 14th century. The north wall opposite has a wide, segmental tomb recess, 14th century?, effigy gone. The doors to the vestry and organ chamber in the side walls of the west bay have plain 2-centred rear-arches which were retained from 14th century recesses, possibly the so-called ‘choir-recesses’ characteristic of Pembrokeshire churches (cf. Herbrandston and Johnston). The plain 2-centred chancel arch is similar. The chancel is vaulted with a 2-centred barrel-vault from the 14th century. The floor is tiled, from 1866-7.

The nave side walls are battered externally. The transept arches in the east bay are similar to the above, and there is a suggestion (see above) that they represent medieval arches unblocked in 1929-31 when the transepts were built. A plain corbel above the north wall arch springer supported the former rood-loft. The north doorway has a 2-centred surround of apparent 13th-14th century date, but possibly restored. Opposite is the blocked south door, with a 2-centred surround of large square voussoirs, 13th-14th century. The west bay is lit by a window in each side wall, both of 2 plain-cusped lights with central trefoils in squared limestone surrounds, 1866-7; the northern reveal descends to floor level and is probably medieval (cf. Herbrandston) and possibly originally a baptistery (Freeman, 1852, 177). The nave is vaulted like the chancel. The passages are tiled, from 1866-7, and the woodblock flooring was laid, on concrete, in 1929-31.

The west tower was undergoing restoration in January 1998 and could not be properly examined. It is of 5 storeys, one of a group of Pembrokeshire towers (see above) with multiple horizontal divisions. It has retained most of its medieval fabric, of earlier 16th century date, and is tapered. A square spiral stair turret occupies north-west corner, entered from the ground floor through a segmental-headed door, earlier 16th century, above floor level; the stair is lit by simple slits. The ground floor entered from the nave through a wide, plain 2-centred arch. The interior is not plastered. There is a window in the west wall with a segmental rear arch contemporary with the rest of the tower but with a window rebuilt like those in the nave, 1866-7. The ground floor is vaulted with a 2-centred barrel-vault with a large central bell-rope opening, all early 16th century; floored as the nave passages, 1866-7. The second storey is also vaulted (RCAHM, 1925, 105). There are simple slit-lights in the succeeding stages, and the belfry stage has 2-light openings in each of the 4 sides, with semicircular heads and squared surrounds. The parapet lies on a plain corbel table, continuous around the tower, without crenellations in 1925 (ibid.), not seen in 1998.

Much yard build-up around the church was excavated away in 1929-31, and a deep, revetted cutting was excavated around the church except the east end, and concrete-lined; footings, however, are only exposed north of the nave where the cutting is below the level of the medieval door sill. Floor levels were raised in the 18th century. The floors are not suspended and lack an underfloor void. No internal crypt/vault is evident. There is no evidence for former components beyond the present walls.

The nave is probably 13th century, and, unlike the chancel, its walls contain much Old Red Sandstone and are battered externally. The form of the chancel arch gives the chancel a 14th century date, when both it and the nave were vaulted. The west tower is from the early 16th century and is of the tall, multi-stage Pembrokeshire type (cf. Gumfreston and Robeston West). The church was radically altered in 1929-31 by the addition of north and south transepts, a north porch and vestry. However, the arches into the transepts apparently existed prior to 1929, according to a contemporary letter in the 1930 Faculty bundle (NLW, SD/F/205). If this is true, they can only have led to medieval transepts. No transepts are shown on the unusually accurate tithe map of 1838 (NLW, Hakin, 1838), and they are not mentioned by Fenton in c.1811 (Fenton, 1903, 100), by Lewis in 1833 (Lewis, 1833), or by Freeman in 1852 (Freeman, 1852, 164-75). They may have been removed early on in the post-medieval period, but no suggestion of their former presence was made by the RCAHM in 1925 (RCAHM, 1925, 105). The church appears always to have been entered from the north but there is also a blocked south door.

Yard build-up was causing problems by 1759 when the church interior was raised, and the floors were flagged between the seats (Pembs. R. O., HPR/38/2). Further expenditure during the 18th century appears to be limited to minor repairs, but in 1792 a western gallery was fitted, which survived until 1929 (Pembs. R. O., HPR/38/62).

The church was restored in 1866-7 under the architect Frederick Wehnert (Pembs. R. O., HPR/38/62), who was also responsible for restoring Manorbier Church, Pembs.,  but no details are known. The present nave windows, however, belong to this restoration as does the nave and chancel roof tabling. The church was refloored, the chancel and passages with the present tiling. The seating was decayed by 1929 and removed.

The RCAHM Inventory of 1925 contains an illustration of the church, before the later restoration, from the south-east (RCAHM, 1925, 105). In it can be seen the west tower, without crenellations, the present east window and the present nave south window; there were no other windows in the nave south wall. The chancel west bay was lit by a cusped lancet with sunk spandrels, medieval and similar to that now in the east bay, while the east bay has a plain, square, post-medieval light; it appears that the medieval light was moved to the east bay when the organ-chamber was built in 1929-31.

The 1929-31 restoration was undertaken to the specifications of the architect J. B. Fletcher of Cardiff (NLW, SD/F/205) at an estimated cost of £2300. The church interior lay up to 3m below the level of the yard, and all fittings were rotten. Much of the external build-up was excavated away and the present external channel cut, and lined with concrete. The internal plaster was stripped, and the chancel and nave were replastered. The chancel, nave and tower were reroofed (above the vaulting) and the nave given new woodblock flooring. The nave was reseated with the present free-standing softwood pews. All other fittings now present, including the altar table and reredos, sedilia seating, altar rail, chancel screen with double pulpits, and desk, are of oak and from this restoration.

The church was doubled in size by the addition of north and south transepts, a transeptal vestry and transeptal organ chamber which were added respectively north and south of the chancel west bay, adjoining the transept east walls, and a north porch adjoining the north transept west wall. The north and south transepts have barrel-vaults (superficially?) like those in the chancel and nave. The vestry and organ-chamber doors were modified from existing medieval recesses (see above). Fenestration copied that from 1866-7 in the nave, and the external vestry door and north porch doors have 2-centred neo-gothic surrounds of oolite. The roofs are all gables, those in the vestry, organ chamber and porch roofs of softwood common rafters without trusses. The floors are all in woodblock laid on concrete as the nave. The transepts were seated as the nave. The organ chamber was fitted with an organ by Messrs. J. J. Binns of Leeds (Pembs. R. O., HPR/38/62).

The limestone font has a square scalloped bowl, a cylindrical stem and a square base, from the 12th-early 13th centuries.

The church was undergoing renovation in January 1998, including repointing of the tower and chancel.

Reason for listing: Listed as C15 Church that stands in churchyard extensively filled with late C18 to C20 memoria;s. Rubble retaining wall and 1930 lych-gate to N.

At the dissolution Pill Priory with all its appurtenances fell to the crown, including the advowson of Hubberston, and in 1786 the patronage was in the hands of the king, as Prince of Wales (ibid.). The annual value of the rectory was £70, in yearly tenths 12s 3¼d, and it was rated in the king’s books at £6 2s 8½d (ibid.).

In 1894 the civil parish of Hakin was created out of the part of Hubberston parish that included the church (RCAHM, 1925, 104n.). and has its own church of St Mary, Hakin. 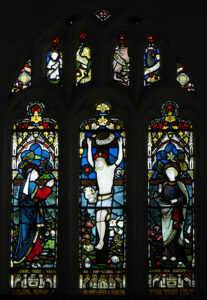 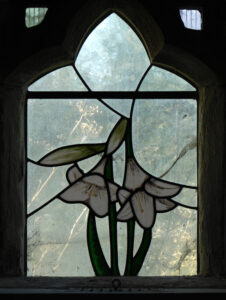 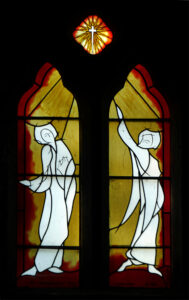 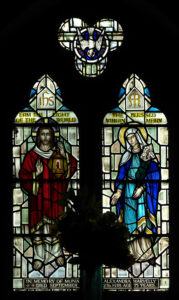 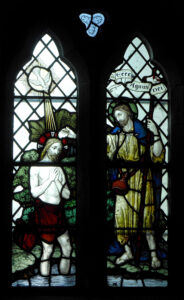 There are three further windows, sadly no detail information available at the time of writing.