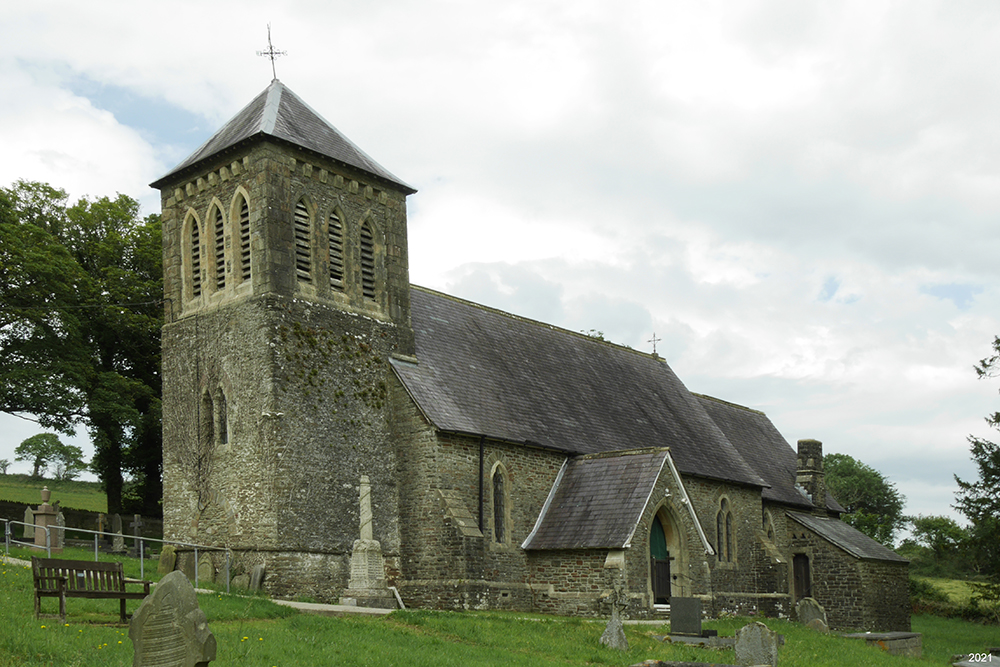 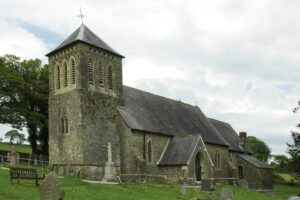 Reason for Listing: A good example of a mid-C19 Gothic Revival church, incorporating earlier features of historic interest, set in a prominent location in Llanedi village.

Archaeological potential – good. No external cutting or drain; suspended floors over void in 30% of church;  below-ground floor is 10% of church.

St Edith, Llanedi, is a multicelled church, of medium size. It appears to be entirely a late 18th – early 19th century rebuild of a medieval church, retaining nothing from the earlier fabric, and was partly rebuilt again in 1860.

The present church consists of a 2-bayed chancel, a 3-bayed nave, a transeptal mortuary chapel north of the chancel west bay, a south porch, a single-bayed vestry south of the chancel east bay, over a below-ground boilerhouse, and a 3-storeyed west tower.

The west tower has been regarded as medieval by, inter alia, RCAHM, 1917, 115, and Yates, 1974, 72. However, despite the basal batter and plain external string course (weathered), the tower is probably later. It is of crude, random local rubble construction with extensive remains of early 19th century render. There is a blocked west door with a 2-centred arch of unweathered, Old Red Sandstone ashlar voussoirs which do not appear to be inserted and are from c.1800; the blocking is not rendered. The second stage is lit by a similar window opening in the west wall, also c.1800, containing an inserted, 2-light window with cusped ogival heads, in yellow oolite from 1860. There is no stair turret, the stair rising within the wall thickness. There is no reason to suppose that the tower is any later than its openings, ie. c.1800.  The belfry stage is an addition, or possibly a rebuild, of 1860 and the junction between the two builds is represented by an offset. It is in squared and coursed local rubble, and features clasping ‘buttresses’ at the 4 corners, united by a corbel table on yellow oolite corbels. There are 3 openings in all except the east face; the openings are lancets with independent chamfered yellow oolite, with timber louvres.  The east face lies mainly beneath the nave roof apex but has 2 small, semicircular headed lights, also from 1860. There is an overhanging, slated pyramidal roof.

The transeptal mortuary chapel may be contemporary, but is possibly earlier, 18th century?. It is of similar construction to the lower stages of the tower, and is lit by a window, similar to the tower lower openings, in the north wall, with a mid 19th century timber traceried sash frame. However, this may be inserted; the chapel is entered from the churchyard through a door in the east wall with a plain, slate, weathered lintel. The chapel has a slated gable roof.

The remainder of the church is from 1860. Construction is in local rubble, squared and coursed, with contemporary pointing. Openings are from 1860 and neo-gothic, with yellow/grey oolite dressings, including plain-cusped single- and 2-light windows with simple plate tracery; the east window has 3 lights with curvilinear tracery above an external string-course. The exterior, except the vestry, is buttressed throughout and there is a chamfered oolite offset around all external walls. The vestry lies over a below-ground boilerhouse, and is entered through a Caernarfon-headed doorway reached by a flight of 4 steps which span the stairwell for the 8 steps down to the similar boilerhouse door. There is a plain square chimney in the chancel south wall. The chancel and nave have slated gable roofs, while the vestry has a slated, lean-to roof.

The chancel, nave and south porch were entirely rebuilt in 1860 to the designs of the architect R. K. Penson (Yates, 1974, 72). The mortuary chapel was retained unaltered, but the tower belfry was added, and the vestry/boilerhouse was built. There appears to have been no major subsequent alteration.

There is a neither an external cutting nor a drain. Floors are suspended over a void in the nave. The boilerhouse is below-ground. No external memorials lie significantly close to the church.

A large earthwork immediately south-west of the church is of an unknown nature.

St Edith, Llanedi, was a not a parish church during the post-conquest period (Rees, 1932), but a chapelry of the medieval Deanery of Kidwelly. It was in the gift of the Welsh community.

In 1998 St Edith, Llanedi, was a parish church. The living was a vicarage, held with Tycroes and Saron (Benefice no. 683) in the Archdeaconry of Carmarthen, Rural Deanery of Dyffryn Aman (St Davids, 1997-8).

The dedication is given as ‘St Edi’ (or ‘Edy’) in most sources, which appears to represent a Celtic tradition rather than a corruption of the name Edith.