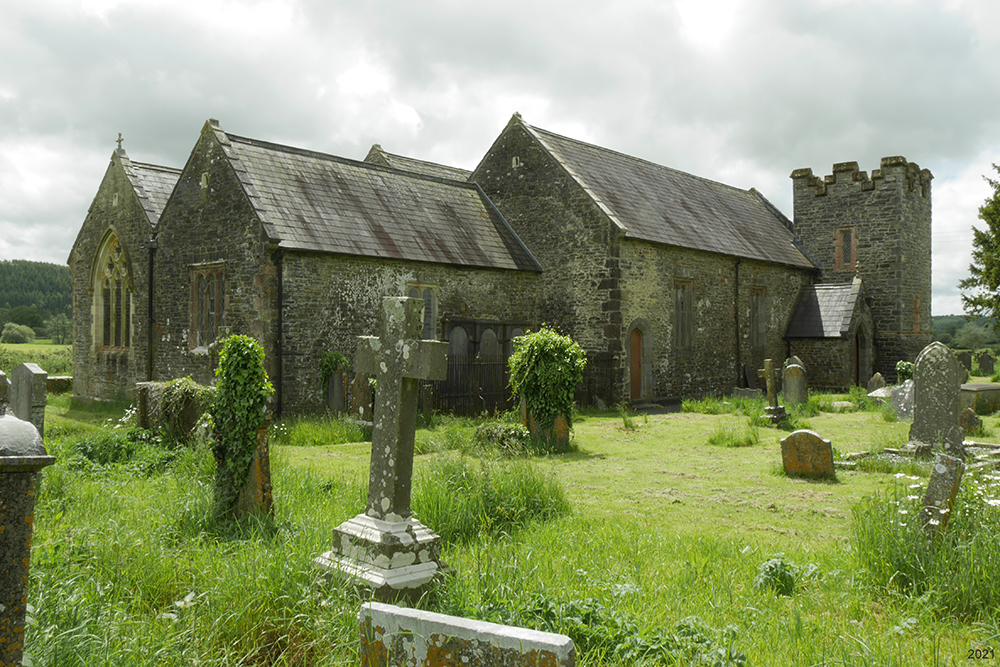 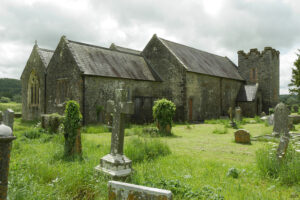 Reason for Listing: Listed as a C19 parish church of definite quality and character, with good interior detail, and for its contribution to the overall historic integrity of this small village.

Archaeological potential – good. No external drain or cutting around church; below-ground floor in 5% of church; suspended floors over a void in 50% of church; external memorial significantly close to 5% of church.

St Egwad, Llanegwad, is multicelled church, of large size. It was entirely (re)built in 1849, on the same site, and in the same location as its predecessor, but retaining nothing from the earlier fabric.

The present church consists of a 2-bayed chancel, a 4-bayed nave, a 2-bayed north chapel, a 4-bayed north aisle, a north porch, a 3-storeyed tower built against the north-west corner of the aisle, and a coalhouse and a boilerhouse south of the chancel. Construction is mainly in roughly squared and coursed limestone rubble; the nave south wall is rendered, from 1948?, and the interior is plastered. Openings are neo-Perpendicular, and except in the tower are from c.1849; windows are mainly 2-light with Old Red Sandstone dressings, but some were rebuilt in 1902 in grey oolite. The north-west tower is square, crenellated, with similar openings from 1902. The coalhouse and boilerhouse are in brick. The roofs are slated gables; the coalhouse and boilerhouse have lean-to asbestos sheet roofs and the tower carries a timber ‘spire’.

The church was entirely rebuilt ‘and enlarged’ in 1849, to the designs of the architect John Harries of Llandeilo (Carms. R. O., CPR/103/31), to accommodate 312 sittings.

The coalhouse and boilerhouse were added in the early-mid 20th century.

The church was renovated, and the internal plaster entirely stripped, in 1948 (Brunker, 1961, 3). It was replastered; the nave south wall may have received its render at the same time.

An inscribed stone (inscription? date?) was found during the 1940s renovation within the south wall (Brunker, 1961, 3).

There is neither an external drain nor a cutting around the church. The boilerhouse floor is below churchyard ground level. Floors are suspended above a void in the nave and north aisle. An external burial vault lies against the north chapel north wall.

After the dissolution, the patronage fell to the Bishops of St Davids, and in 1833 the living, a vicarage in the patronage of the Bishop, was rated in the king’s books at £8 13s 4d (Lewis, 1833).

In 1998 St Egwad, Llanegwad, was a parish church. The living was a vicarage, held with Llanfynydd (Benefice no. 677) in the Archdeaconry of Carmarthen, Rural Deanery of Llangadog and Llandeilo (St Davids, 1997-8).

According to local tradition the original chapel of St Egwad stood ‘in a filed close to the site of the present church’, and was turned into a dwelling house during the 18th century (Sambrook and Page, 1995 (ii), 59), but the village morphology suggests that the present churchyard has a long history of use.