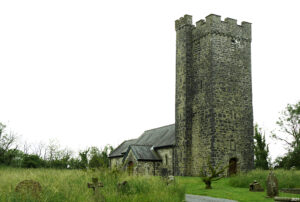 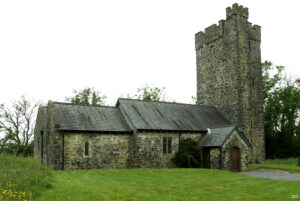 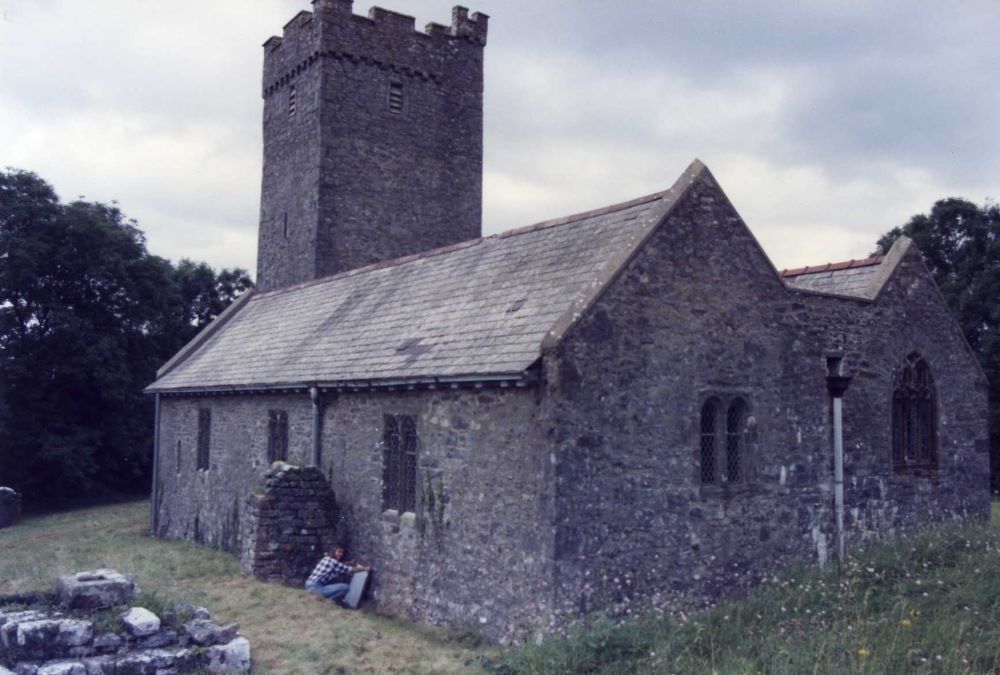 Reason for Listing: Listed as a largely mediaeval church with a fine tower, retaining original form and much of its early fabric, and occupying a prominent site.

The present church consists of a 2-bayed chancel, a 3-bayed nave, a 5-bayed south aisle, a north porch and a 3-storeyed west tower. Construction is in limestone rubble. There are the remains of early 19th century external render in the chancel, and the nave north wall; pointing is mainly from 1893, with some poor 20th century repointing, and the interior is plastered. The tower ground floor is barrel-vaulted. The chancel arch and south aisle arcade are medieval; there are medieval windows and doors, both open and blocked; the 1893 windows are neo-gothic. Roofs are slated gables; the tower roof was not seen.

The 3-light chancel east window has Perpendicular tracery in a 2-centred surround, from c.1500 but restored in 1893; the gable above was rebuilt in 1893. There is a cusped, single lancet in the east bay north wall, from 1893 but in an earlier opening unblocked in 1893 (NLW, SD/F/468); to the west a blocked window is visible, depicted as a small, 2-light window in the mid 19th century (Anon., n.d.). The 2-centred chancel arch has chamfered stops and semi-octagonal imposts, all 14th century. The softwood ‘wagon-roof’ ceiling is from 1893; the passages are tiled, with suspended board floors, from 1893.

The nave east bay is lit by a cusped 2-light window in the north wall, with a square, neo-Perpendicular surround, all an 1893 replacement of a 3-light window of uncertain date (Anon., n.d.). The west bay north wall has a single lancet, as in the chancel and also 1893. The segmental-headed north door may have been altered or rebuilt in the earlier 19th century; to the east is an internal stoup with a bowl moulded as a human face between two flower-heads, in a segmental recess, 14th – 15th century. The softwood nave roof has braced, queen-post trusses with a crown-plate, all 1893. Floored as the chancel, with an underground heating chamber for a ‘Porritt’s’ stove, all 1893.

The south aisle occupies the entire length of both chancel and nave, communicating with them through a 5-bayed arcade of depressed 2-centred arches on cylindrical shafts, with plain-moulded octagonal capitals and bases; the capitals exhibit moulded shields; all 15th century.  The east wall is pierced by an uncusped, 2-light window in a square surround, 16th – early 17th century. There are three 2-light windows in the south wall, all as in the nave east bay and similarly from 1893 but occupying earlier (late medieval or post-medieval) openings (NLW, SD/F/468). The west wall is pierced by a double lancet, also from 1893 in an earlier opening; below can be seen slate creasing of unknown purpose. A blocked single light window can be seen in the south wall of each of the eastern 2 bays, while in the west bay south wall is an uncusped single lancet from the 15th century, reopened in 1893. The central bay exhibits a blocked medieval doorway with a 2-centred head, to the west of which lies a deep-bowled, late medieval stoup in a 2-centred recess. Roofed as the nave, but with tie-beams, 1893. Floored as the nave.

The west tower has been altered but in its original state may be early, probably from the 14th century; it lacks the external string-course typical of the region, and has no external batter, being tapered throughout (cf. Loveston, S. Pembs.). A square spiral stair turret projects from the east half of the north wall. The 2-centred arch into the nave was blocked before the 19th century; the west door has a segmental-headed, chamfered surround from the 16th – 17th century, and a similar, blocked single light lies above. The ground floor has a 2-centred barrel vault, 14th century; the floor is concrete. The second stage is lit by lancets and square-headed single lights, all 14th century. The tower formerly possessed a saddleback roof and belfry, the outline of which can still be seen, and above this level the walls become perpendicular, including in the stair turret. The present belfry stage is a rebuild of the late 15th century and has contemporary, single-light square-headed openings in the east, south and west walls, and a similar, 2-light opening in the north wall, the crenellated parapet lies on an external corbel table, also 15th century. The brick flue from the Porritt’s stove rises through the tower interior, 1893. The ground floor is now used as a store.

The north porch appears to be mid-19th century. There is a contemporary plain, square doorway in its east wall, while the similar north wall door was rebuilt from an elaborate, moulded doorway in 1893. The softwood roof was rebuilt in 1893, without trusses; the quarry-tiled floor is also from 1893.

The church stands upon a pronounced, regular, rectangular earthwork platform which extends eastwards to form a remarkably square east end, beyond the present east wall, with a low bank possibly representing a buried wall – chancel originally longer?. A shallow, earth-cut drain surrounds the church except the tower. There is no evidence for floor level changes. Floors are suspended above heating flues, and there is an underground heating chamber in the nave. External memorials lie significantly close to the south wall.

The nave may be 13th century, but cannot be closely dated. The chancel arch is 14th century, as may be the chancel itself. The west tower was originally a saddleback tower of early form, probably 14th century. The arcade dates the south aisle to the 15th century, when the tower belfry stage was rebuilt in its present form. There was a refenestration in the later 16th – early 17th century (surviving in the south aisle and tower).

The north porch appears to have been an addition of the mid-19th century. It is not shown on the tithe map (NLW,  Ludchurch, 1839) but was present by 1873 (Anon., n.d.) when the south door and some medieval windows had been blocked; this work all probably dates from c.1860 when the church was repaired, partially reseated (Cadw, 1997, 15), and at least the partially refenestrated. The blocking of the tower arch may be earlier.

A restoration was anticipated in 1873 (ibid.), under the architect John P. Seddon, but the work appears not to have been undertaken.

The church was restored again in 1891-3,  to the designs of the architect F. R. Kempson (NLW, SD/F/468). It was partially refenestrated, one of the porch doors was rebuilt, and the interior was reroofed, refloored, replastered and reseated. A ‘Porritt’s’ stove was installed.

The oak stalls, and freestanding softwood pews are from 1893. The pulpit may be earlier 20th century. The carved oak chancel screen is from 1928 (NLW, SD/F/469).

The limestone font has a square bowl, stem and base, all 12th century? (later according to RCAHM, 1925, 204); the stem has been retooled in classical style.

In 1998 St Elidyr, Ludchurch, was a parish church. The living was a vicarage, held with Begelly and Crunwere (Benefice 815) in the Archdeaconry of St Davids, Rural Deanery of Narberth (St Davids, 1997-8).

The ‘Elidyr’ of the dedication may be equated with St Teilo.