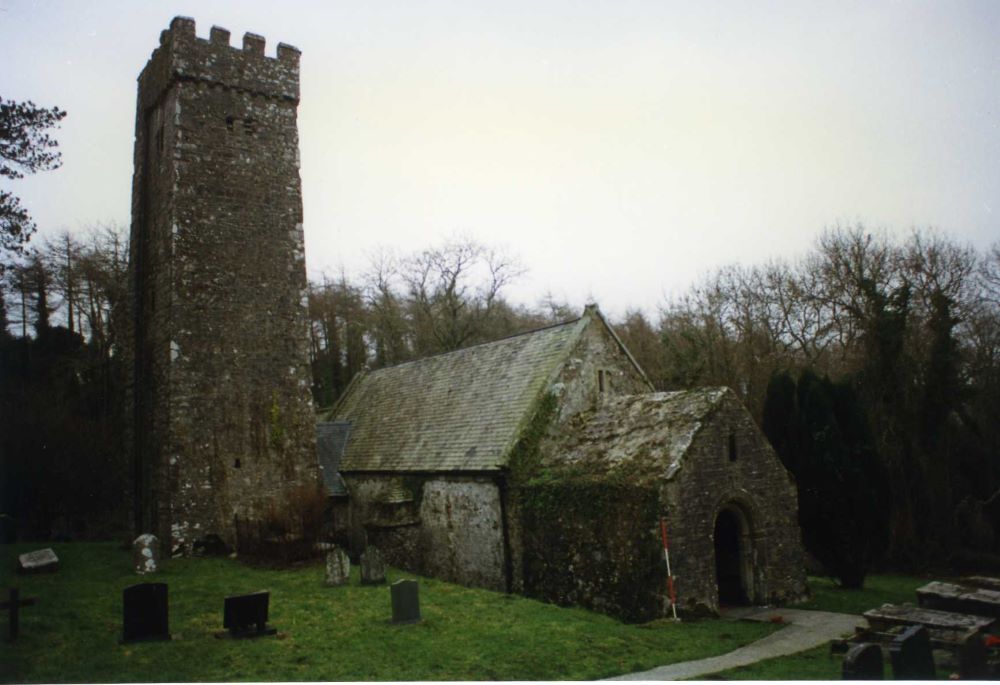 The present church consists of a 2-bayed chancel, a 4-bayed nave, a single-bayed transeptal south chapel, a 5-storeyed north transeptal tower and skew passage, and a west porch. Construction is in limestone rubble; there are the limited remains of 18th – early 19th century external render in the chancel but the pointing is mainly from 1867-9, with some (poor) later 20th century cement repointing; the interior is plastered except in the west porch, with medieval plaster including a wall-painting. The tower and west porch are barrel-vaulted, while the south chapel has a rib-vault. The chancel arch, many windows and doors are medieval; other windows are 17th century and there is a medieval – 17th century ?baptistery. Roofs are slated gables; the gabled porch roof is unslated and the tower roof was not seen.

The chancel east wall has a slight external batter. The east window occupies an early 19th century, brick-headed embrasure that was constricted in 1867-9 for the present single lancet. There is a single light in the north wall with a medieval embrasure but the present square headed surround is in mortar, from 1980? (Pembs. R. O., HPR/77/124). The south wall window has been subject to many rebuilds and occupies a large area of blocking; the single-light window occupies an area within defined by brickwork from the early 19th century but containing a limestone surround from the 17th century, rebuilt in 1867-9 and since given a concrete lintel, 1980? (ibid.). Internally, a medieval piscina with a semicircular bracket bowl occupies a square-headed recess. The small, semicircular-headed chancel arch has plain imposts and is probably 12th century; either side are square recesses that may be blocked squints, to the north is a blocked, square-headed rood-loft door while the either side on the east face is masonry benching. The softwood chancel roof is from 1867-9, with collar-rafter trusses arch-braced from wall corbels, matchboarded above. The sanctuary floor comprises early 17th century memorial slabs; the remainder of the chancel is tiled, from 1867-9.

The nave south wall leans outwards markedly. The east bay exhibits rood-loft corbelling. A vaulted, semicircular alcove projects from the north wall, perhaps a medieval baptistery, or monumental in nature, 17th century and possibly occupying the site of a medieval north door; in the south wall opposite is blocked south door with a 2-centred head, 13th-14th century. The nave is lit by a medieval lancet, with a limestone surround, in the north wall, which was reopened in 1867-9; in the south wall are 2-light and 3-light windows with square limestone surrounds of 17th century date; they have been given concrete lintels as in the chancel, and the eastern of the 3 is a copy of 1867-9. An area of irregular masonry at the west end of the north wall may be patching rather than blocking. The south wall exhibits external buttressing in 1867-9. The west wall has a 2-centred doorway of 13th – 14th century date and 2 square-headed slit lights above, both medieval but one blocked and the other partly rebuilt. Internally, there is a stoup in the north wall with a square head, adjacent to a medieval wall-painting probably representing the martyrdom of St Lawrence, uncovered in 1980. The softwood roof is from 1867-9 and has alternate collar-rafter and king-post trusses, the former arch-braced from wall-corbels and the latter with tie-beams, matchboarded above. The passages are tiled, with suspended board floors, from 1867-9.

The transeptal south chapel is entered through a wide, plain 2-centred arch of early 16th century date. The walls are battered externally. It is now used as a vestry and there is a doorway into the churchyard in the east wall with a trefoil head from 1867-9. It is lit by a cusped, 2-light window in the south wall from the early 16th century., reopened and partly rebuilt in 1867-9. It has a cross-ribbed vault, but there are suggestions that the plain, square ribs may be later insertions. Floored as the chancel incorporating a memorial slab from 1614.

The tower ground floor occupies a north transeptal location and communicates with the nave via a plain, irregular 2-centred arch from the 14th century. A square spiral stair turret projects from the north-east corner entered through a square-headed doorway from the 15th century. The north wall features a 2-light 17th century window like those in the nave, but occupying an earlier embrasure. In the east wall is a blocked window and a recess with a 2-centred head; the latter may be a tomb-recess but the presence of an associated corbel suggests the possibility that it was a secondary altar; a recess in the west wall may be for a tomb but any effigy has gone. The 2-centred barrel vault may be 14th century; floored as the chancel. The skew passage has segmental-profiled openings to the chancel and tower, and a crude slab roof. It is lit by a simple, square-headed opening with an Old Red Sandstone surround from the 17th century.

The remainder of the tower is from the late 15th century and comprises 4 further storeys, an example of the multi-storeyed Pembrokeshire tower seen elsewhere at eg Robeston West and Hubberston., Pres.. It is lit by simple square openings in the north and east walls, 15th century; the belfry stage has similar, 2-light openings in the north, west and east walls, and a crenellated parapet on an external corbel table.

The west  porch is vaulted as the nave. The doorway features a medieval, 2-centred surround; above it lies a simple loop. A medieval stoup lies within the south wall, with a plain bowl in a simple recess. Internally the side walls exhibit masonry benching, medieval. The 2-centred barrel vault is also medieval, and has no external covering. Floored as the nave passages.

A possible external earthwork platform lies along the south side of the church. A deep, wide external drain runs along the nave and porch north walls, cut in 1867-9 when the adjacent churchyard levels were truncated. Floors are suspended above a void, and lowered in 1867-9. There are many known burials beneath the chancel and south chapel. A few external memorials lie significantly close to the nave and north transept.

The form of the chancel arch suggests that both nave and chancel may be 12th century, though an offset visible in the nave south wall between the east and central bays may represent a change of build or a break in construction; the wall is slightly narrower to the west. The tower was erected over a pre-existing north transept which, with the skew passage, is 14th century (Thomas, 1964); the west porch may be of similar date and its crude, unfinished vault surface suggests that it may have been initially intended to carry a tower. The tower was erected over the north transept in the later 15th century, while the detail of the south chapel suggests an early 16th century date. The semicircular alcove projecting from the nave north wall is similar to that at Llys-y-fran, Pres., where it appears to represent a late medieval baptistery; it has been suggested that the Gumfreston alcove is monumental in nature and 17th century (RCAHM, 1925, 103). There are a number of windows from the early-mid 17th century.

There has been no substantial further addition, but a lean-to (shed?) is shown against the south wall of the nave east bay in early 19th century drawings (Tenby Museum & Art Gallery, 1983/2132, 1817-39, et al.) when the chancel and nave had very low-pitched roofs, much overgrown. The chancel was refenestrated in the early 19th century, with brick surrounds.

The church was restored in 1867-9 (Anon., 1992), but the impact of the work was very slight. The nave buttresses were added, and the east window, nave south wall east window and south chapel door were inserted. The church was reroofed and the interior was refloored and reseated.

The limestone font has a chamfered square bowl, cylindrical stem and square base, from c.1200.

St Lawrence, Gumfreston, was a parish church during the post-conquest period (Rees, 1932), of the medieval Deanery of Pembroke. The church appears always to have been in the patronage of the Lord of the Manor of Gumfreston. In 1291 it was assessed at £5 6s 8d, the amount payable being 10s 8d (Green, 1911, 305).

In 1998 St Lawrence, Gumfreston, was a parish church. The living was a curacy of the Rectorial Benefice of Tenby (Benefice 702) in the Archdeaconry of St Davids, Rural Deanery of Narberth (St Davids, 1997-8).

Gumfreston is one of the sites traditionally held to be ‘Eglwys Gunniau’, the 5th century birthplace of St Teilo (Cadw, 1996, 9).