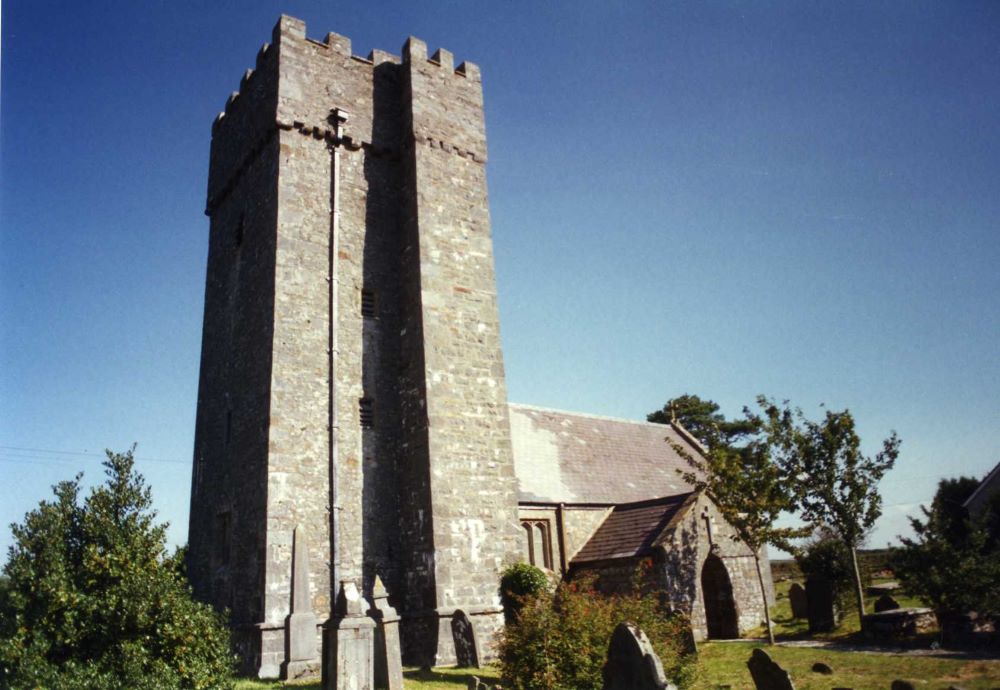 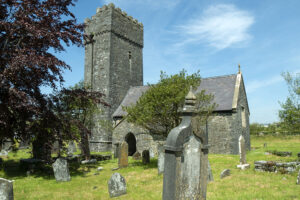 Reason for Listing: Included as a restored medieval church with fine W tower.

The present church consists of a 4-bayed chancel/nave, without structural division, a single-bayed north transept, a south porch, and a 3-storeyed west tower. Construction is in limestone rubble. There are some medieval openings in Old Red Sandstone; other dressings are in grey oolite, neo-Perpendicular and from 1895-8. The cement pointing is probably from 1895-8 and the interior is plastered, 1895-8. Roofs are slated gables; the tower roof was not seen..

The chancel/nave east wall was refaced with roughly squared and coursed limestone rubble in 1895-8. The east window has three 4-centred uncusped lights, in late Perpendicular style with a square surround, from 1895-8; beneath it is an offset area, from 1844?. The north wall is unlit, but there are 3 windows in the south wall. The easternmost is a single cusped lancet in chamfered Old Red Sandstone, weathered, from the 15th century but re-used with squared and coursed infill from 1895-8. To the west are two 2-light windows, otherwise as the east window and also from 1985-8, with squared and coursed infill. Between the 2 latter windows is the south door which has a 2-centred surround in chamfered oolite from 1844; to its east, the external face retains a simple stoup with a squared bowl, 13th – 14th century. Internally, the centre of the north wall is pierced by a recess and flue for a free-standing stove, from 1895-8; a very low screen wall separates the ‘chancel’ and ‘nave’, from 1844?, or 1895-8?. The chancel/nave has a continuous softwood roof from 1895-8, with simple king-post trusses. The passages are quarry-tiled, with suspended woodblock floors, from 1895-8.

The north transept is of uncertain date, but is of similar rubble to the chancel/nave, with large quoins. It is entered from the chancel/nave through a doorway with a 4-centred oolite surround, from 1895-8. The northern, gable wall has been rebuilt above eaves level in roughly squared and coursed limestone rubble from 1895-8; it is pierced by a window from 1895-8 like those in the nave. The transept is roofed as the nave, and has a quarry-tiled floor also from 1895-8 with no void beneath; it is now used as a vestry.

The west tower, which is noticeably out of alignment with the nave, is from the 15th century, comprises 3 storeys, and is massive, dwarfing the rest of the church. It is slightly tapered and has the external batter up to a string-course typical of the region. A square spiral stair turret projects from the eastern half of the south wall but does not appear to be bonded with the tower, and with the parapet may be an addition, of the 16th century?; it was entered through a 2-centred doorway with a chamfered limestone surround, ?16th century but blocked in 1844 (the door itself unblocked in 1996) and is lit by simple loops. The ground floor communicates with the nave through a plain, slightly depressed 2-centred arch, from the 15th century. There is no west door, the west wall being pierced by a window like those in the nave and possible an 1895-8 copy of a 16th century original, in the original embrasure. The plain, 2-centred barrel-vault  is pierced by a trapdoor from 1895-8. The floor is quarry-tiled as the chancel/nave, 1895-8. The second stage is lit by a single light with a square surround in chamfered Old Red Sandstone, from the 15th century, low down in the south wall, and by a simple square light with a plain limestone surround in the west wall, which is from 1895-8 and occupies the contemporary blocking of a plain, square doorway inserted in 1844. The belfry stage has single, square openings with simple surrounds like that in the second stage, and also from the 15th century, in all 4 faces. The crenellated parapet lies on a corbel table and is tall; it may be an addition or rebuild, of the 16th century?, when the stair turret was added?, and appears to have been heightened again when the crenellations were rebuilt, in 1844?.

A deep, slab-lined external cutting surrounds the church; it is primary in origin but was recut in 1895-8. Floors are suspended over a void in the chancel/nave and tower. Few external memorials lie significantly close to the east wall.

The chancel/nave may be 13th – 14th century, suggested by the stoup in the south wall, but has been much rebuilt. The south porch may be 14th or 15th century. The west tower may comprise 2 phases, in essence being 15th century (possibly earlier rather than later?), with a west window that may be originally have been from the (mid) 16th century when the stair turret and parapet may have been added; there was ‘one small bell’ in the tower in 1552 (Wallcott, 1871, ii). Any resemblance to the tower at Cyffig, part of the same medieval benefice, is purely superficial.

The north transept is of uncertain date. The church is shown on the tithe map of 1839 (NLW, Marros, 1839) as a cruciform, ie. with the north transept, but this may be purely a convention; the transept is similar to the nave in construction and may be from 1844. (A plan of 1821 (Carms. R. O., Westmead Estate Sale Plan, 1821) shows a stylised church drawing). The northern, gable wall was rebuilt in 1895-8 suggesting that it may formerly have been a side wall, and that the transept was originally an east-west running aisle; it was originally open to the chancel/nave (NLW, SD/F/480).

A school was held in the first floor of the tower until 1840 (Treherne, 1926, 21) and the early 19th century fireplace survives; the spiral stair was blocked in 1844 and a doorway inserted into the west face of the tower (ibid.). The present trapdoor through the vault was inserted in 1895-8.

The church was again restored in 1895-8 (NLW, SD/F/480), to the designs of the architects Prothero and Phillott of Cheltenham, Cambridge and Newport. A wall, with the present doorway, was constructed between the vestry and the chancel/nave. The east wall, and the upper half of the north transept north wall, were rebuilt/refaced. The church was refenestrated, including the tower ground floor, and the medieval south wall window was re-used (but not relocated). The church was reroofed, refloored, reseated and replastered.

The simple, square pulpit may be from 1844 (Anon., n.d., 9). The softwood stalls, on freestanding boarded floors, the softwood pews and a surviving but disused iron stove, are from 1895-8.

The limestone font has a square bowl of uncertain date, and a cylindrical stem and base from the 13th century.

The base and shaft of a churchyard cross survive within the churchyard. The churchyard is said to have yielded bronze age cremation urns during excavations in 1898 (RCAHM, 1917, 212, et al. ).

In 1833 the living, a vicarage consolidated with that of Cyffig, was endowed with £800 royal bounty; £8 per annum was contributed by the Vicar of Laugharne, who held the advowson (Lewis, 1833).

In 1998 St Lawrence, Marros, was a parish church. The living was a vicarage, held with Pendine, Llanmiloe and Eglwys Gymyn (Benefice no. 641) in the Archdeaconry of Carmarthen, Rural Deanery of St Clears (St Davids, 1997-8).