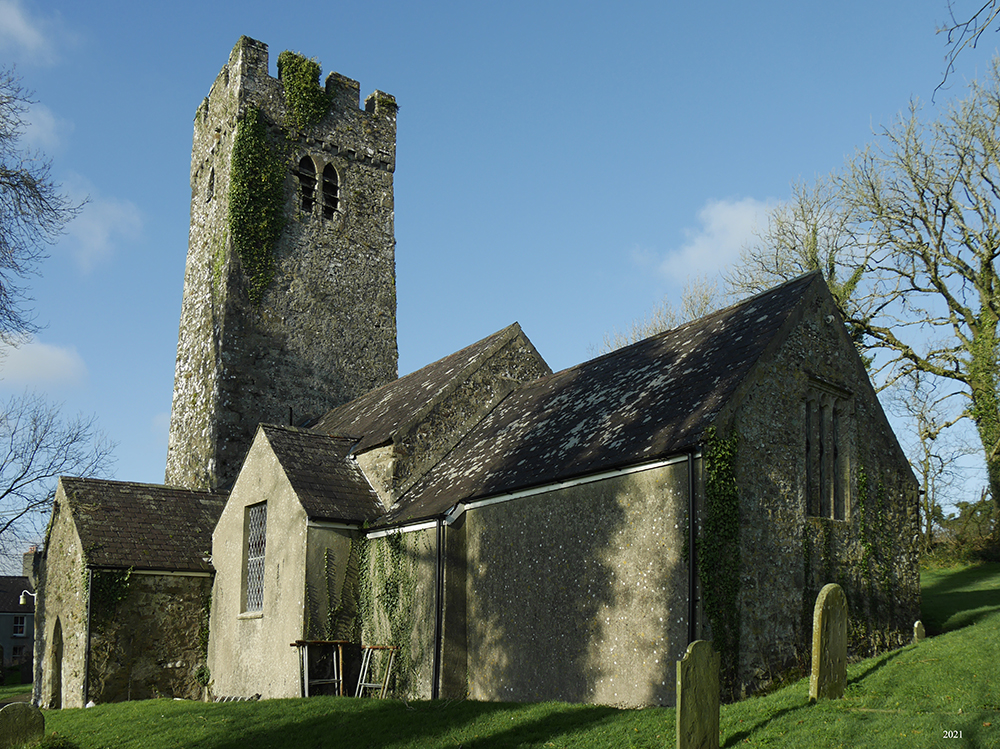 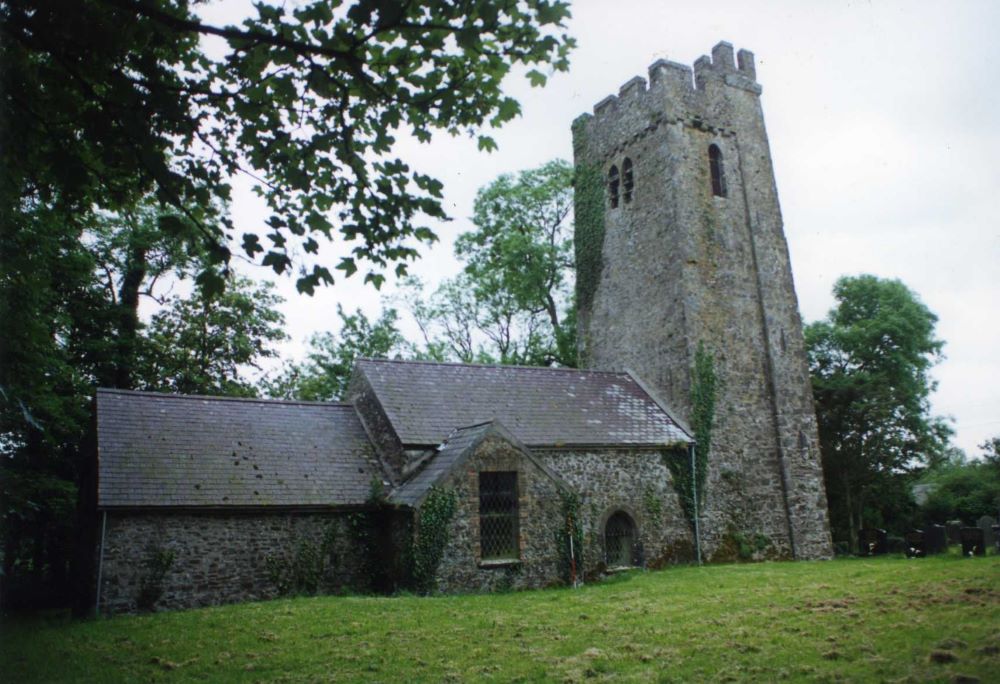 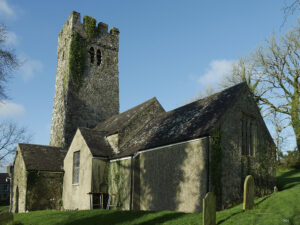 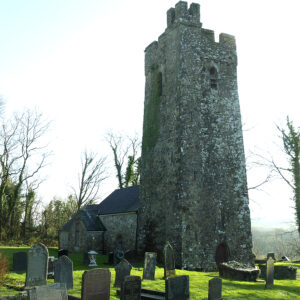 Reasons for listing. None given.

The present church is cruciform and consists of a 2-bayed chancel with a ‘choir recess’, a 2-bayed nave, single-bayed north and south transepts, a south porch and a 3-storeyed west tower. Construction is in limestone rubble. Pointing is mainly from 1914, with some external render from the 20th century, and the interior is plastered. The transepts and tower ground floor are barrel-vaulted. The chancel arch and squints are medieval; there are medieval windows and doors, both open and blocked, many with distinctive 2-piece heads; there is little later work. Roofs are slated gables; the tower roof was not seen. The floors are 18th – early 19th century.

There is a Jacobean monument, now obliterated.

The cusped, 3-light chancel east window has a square surround and drip-mould, of late Perpendicular style and 16th century. The south wall is rendered externally, 20th century, and has a basal plinth; there is the embrasure for a blocked window, medieval, and below it a piscina represented by a 2-centred recess, also medieval. To the west the south wall is thrown out as a shallow ‘choir recess’ as seen at eg. Herbrandston and Johnston, both Pres.; it lies beneath a segmental arch and has a blocked, single light window, both medieval. The north wall retains a possible early roof-truss corbel. The 2-centred chancel arch has chamfered stops and chamfered imposts and bases, all 14th century; either side is a squint, each with 2, square-headed chamfered lights in a square surround, from the 16th century, the northern of which has lost its mullion (cf. the similar squints at Johnston, Pres.). A large, but obliterated Jacobean monument lies south of the altar, with Corinthian pilasters and a moulded entablature with a heraldic crown. The softwood roof has simple collar-rafter trusses with coach-bolt fastenings, from 1914 but possibly re-using earlier timbers. The flagged floor is weathered, 18th – early 19th century; the sanctuary has a 20th century ‘marble’ floor.

The 2-bayed nave is very short and was originally unlit; the north wall window has been converted from a blocked north door with a 2-piece, 2-centred head from the 14th century, now containing a single-light window from 1914. The south door is similar, also 14th century; to the east is a stoup represented by a square-headed recess, medieval. The ?collar-rafter nave roof is concealed by a plaster ceiling of 3 cants, 1914?. Floored as the chancel, 18th – early 19th century.

The transept arches reflect the profiles of their medieval 2-centred barrel vaults. They are by simple, square window in their end walls, with brick surrounds from the early 19th century. Floored as the chancel, 18th – early 19th century. The north transept is now used as a vestry.

The south porch has a similar doorway to those in the nave, also 14th century but with a concrete rear-arch from 1914; the internal benching is also concrete and from 1914, replacing earlier benching?. In the east wall is a simple stoup like that in the nave. The roof is simple like that in the chancel, also 1914 but probably re-using earlier timbers. Floored as the chancel, 18th – early 19th century.

The west tower is demonstrably of one build with the nave and its form suggests that it is early, probably from the 14th century; it lacks the external string-course typical of the region, and has no external batter, being tapered throughout (cf. Ludchurch, S. Pembs.). A square spiral stair turret projects from the north-west corner, entered through a 2-centred doorway, 14th century, and is lit by simple loops. The west door is like those in the nave and porch and similarly 14th century; above it is a similar single lancet, also 14th century but rebuilt in cement in the 20th century. The 2-centred arch into the nave reflects the profile of the 2-centred barrel vault. Floored as the chancel, 18th – early 19th century. The second stage is lit by simple slit-lights, all 14th century. The belfry stage has single-light openings with 2-piece heads in the north, south and west walls, and a similar, 2-light opening in the east wall, al 14th century; the crenellated parapet lies on an external corbel table, also 14th century but partly rebuilt, especially over the turret.

There is a slight external earth cutting along the north wall, primary?. A very shallow, earth-cut drain surrounds the church except the tower. There is no evidence for floor level changes. The floors are laid directly on the substrate throughout. No external memorials lie significantly close to the church.

St Leonard, Loveston appears, uniquely, to be a single-phase structure belonging entirely to the 14th century. The characteristic 2-piece headed openings occur throughout the nave, porch and tower, no external joints are visible and there is no evidence to suggest that the chancel or transepts are any later. The general form of the tower tends to confirm its early date. The east window and squints are from the earlier 16th century.

There has been little alteration. The transept windows belong to the earlier 19th century, possibly contemporary with the flagged floors.

A restoration of 1914, to the designs of the architect F. R. Kempson (Pembs R. O., HPR/74/9), was very low impact and confined to reglazing the windows, reroofing, replastering and reseating the church. The seats were pitch-pine box-pews, removed in 1971-5. The external render in the chancel is probably rather later.

The limestone font has a square scalloped bowl, a circular stem and a square base, all 12th century.

Reasons for listing. None given.

St Leonard, Loveston, was a parish church during the post-conquest period (Rees, 1932), of the medieval Deanery of Pembroke. The patronage always appears to have lain with the Lords of Manor of Loveston and remained in private hands (Green, 1912, 277).

In 1998 St Leonard, Loveston, was a parish church. The living was a rectory, held with Jeffreyston, Reynalton and East Williamston (Benefice 668) in the Archdeaconry of St Davids, Rural Deanery of Narberth (St Davids, 1997-8).