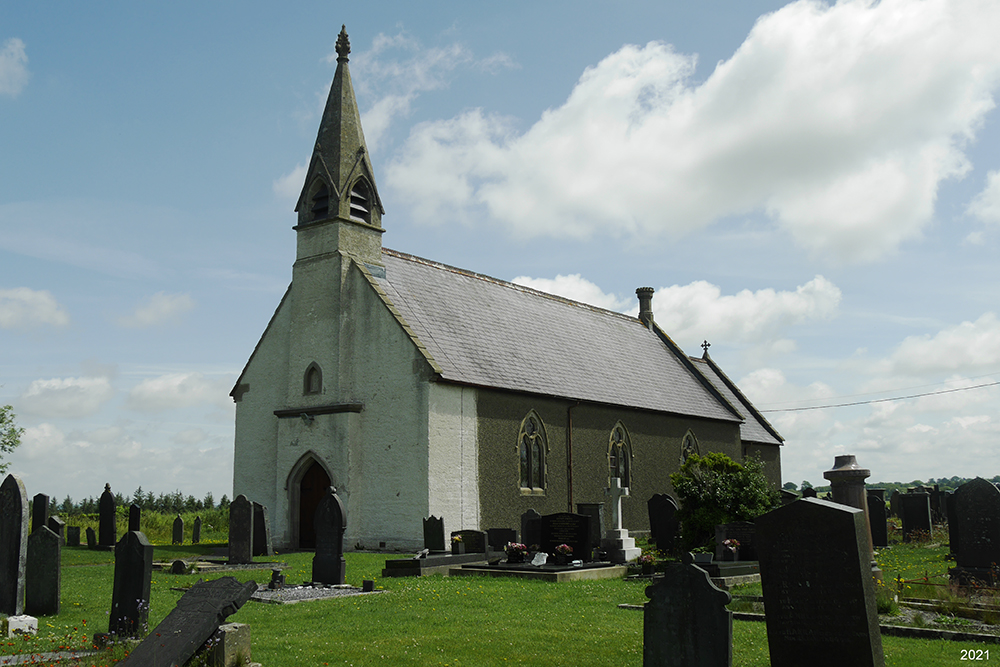 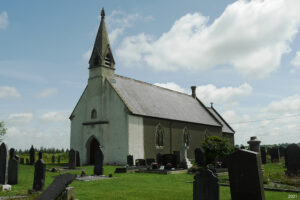 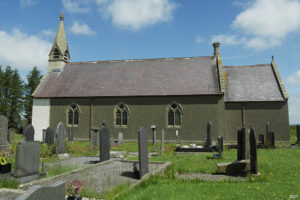 Listed Building No. 1563 – Incorect ref number. For location in Wrexham.

St Llawddog, Penboyr, is a 2-celled church, of small size. It was (re)built in 1809 on the same site, and in the same location?, as its predecessor (PRN 5625) but retaining nothing from the earlier fabric; it was heavily restored in 1887.

The present church consists of a single-bayed chancel, a 3 bayed nave, a bell turret/tower, with a spire and incorporating a west porch, and a single-bayed vestry north of the chancel. Construction is in local slate rubble (NLW, SD/F/550), now concealed beneath external roughcast throughout; the interior is plastered. All dressings are in yellow oolite and from 1887, except the west door retained from 1809 and a re-used mid-19th century window in the vestry; the openings are neo-gothic comprising cusped 2-light windows with simple tracery. There is an elaborate broach spire over the bell-turret, also from 1887, in grey oolite with lucarnes. There is an ornamental chimney over the chancel arch from the former underfloor heating. The roofs are slated gables; the vestry has a slated lean-to roof. The floors are suspended except in the porch.

The 1809 church is shown in the drawings that accompanied the Faculty submission for the restoration of 1887 (NLW, SD/F/550) and it is apparent the restoration was high-impact. Though the core plan and fabric were retained, all the detail from 1809 was lost. The church, as present, comprised a single-bay chancel and a 3-bay nave, with a bell-turret/tower over the porch at the west end. A vestry, however, lay north of the nave central bay; this may have been added after 1809. The corners of the building were decorated with plain finials and the bell-turret carried a cupola; the nave was lit by 3 windows in the south wall and 2 in the north wall, and there was an east window, all with simple timber tracery. The whole was in the ‘estate-chapel’ style as seen at, inter alia, Capel Colman in Pembs.

The 1887 restoration, to the designs of the architect D. Jenkins of Gorslas (ibid.), swept away both the detail and the old vestry. The church was refenestrated, reroofed, refloored and reseated; the west door was, however retained and the old vestry window was re-used. The present vestry was built north of the chancel re-using the window from the old vestry. The spire was erected over the bell-turret.

There is neither an external cutting nor a drain. The floors are suspended over heating ducts. Many external memorials lie significantly close to the church. (There is an earthwork platform immediately west of the church, nature unknown).

St Llawddog, Penboyr, was a parish church during the medieval period (Rees, 1932), of the medieval Deanery of Emlyn. The advowson was always in private patronage; in 1347, Edward the Black Prince was the patron, but a rival claim was made by the Bishop of St Davids who ordained a vicar (Anon., 1922, 49-50).

In 1998 St Llawddog, Penboyr, was a parish church. The living was a rectory, held with Llangeler (Benefice no. 835) in the Archdeaconry of Cardigan, Rural Deanery of Emlyn (St Davids, 1997-8).