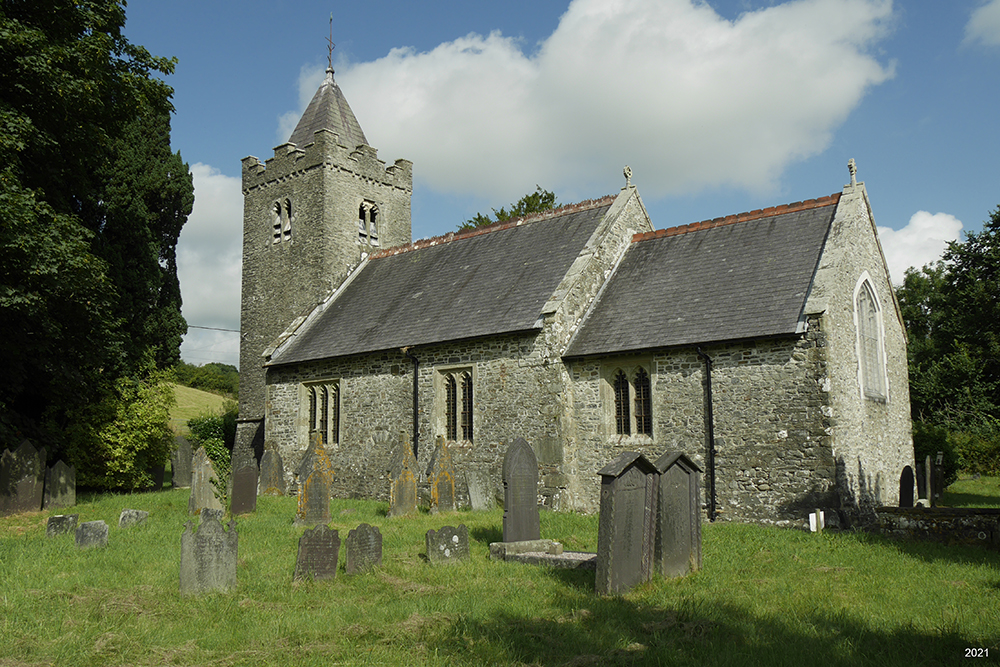 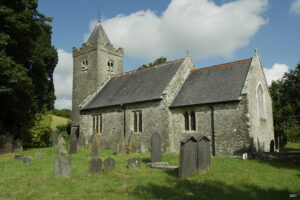 The present church consists of a 2-bayed chancel, a 2-bayed nave, a 3-storeyed west tower and a single-bayed vestry north of the chancel west bay. Construction is in local rubble throughout, mainly with poor later 20th century repointing; plastered within. All present openings are from 1877, neo-gothic with yellow and grey oolite surrounds, but there is a blocked medieval door, and a stoup. Roofs are slated gables; the vestry has a slated lean-to roof and the west tower has a slated pyramidal roof.

The chancel east wall was entirely rebuilt/refaced  above the footings in 1877, with the present plain, cusped 3-light east window. The upper halves of the side walls were also rebuilt. There is a 2-light neo-Perpendicular window in the south wall, from 1877, with a cusped double sedilia and a similar piscina to the east, both also from 1877. The 2-centred, moulded chancel arch is from 1877 and above it, the external face of the wall exhibits the creasing for an earlier, higher chancel roof slope. The softwood ceiling is from 1877, with arch-braced queen-post trusses and open ‘wagon-roof’ framing. The tiled floor is also from 1877.

The nave side walls are very thick and have a pronounced external batter, but were substantially rebuilt in 1877 with 2 windows in the south wall and one in the north wall, of 2 and 3 lights and like the chancel south wall window. In the centre of the south wall is a blocked medieval door with a low, 2-centred head. The west door was rebuilt with a moulded 2-centred surround in 1877; to the north is a stoup with a moulded bracket bowl, from c.1500, in a plain square recess. The nave roof is from 1877 and like that in the chancel. The woodblock floor is probably early 20th century and overlies a disused below-ground heating chamber.

The west tower was added in the mid 19th century. It has a basal batter up to plain string-course partly rebuilt in 1877, and lacks a spiral stair turret. The west door has been rebuilt with a moulded yellow oolite surround, possibly post-1877. There is a single lancet in the south wall, inserted in 1877. The ground floor has a timber ceiling with a trapdoor and timber staircase up to the second stage. Floored as the nave. The second stage is lit by an 1877 lancet in the west face; below it is a small human figurine in a recessed stone, medieval but not in situ. There are cusped, 2-light openings in each face of the belfry stage, all from 1877 as is the corbelled parapet with crow-stepped crenellations. The tower carries a pyramidal slate roof, also 1877.

The vestry is from 1877 and lit by single lancets in square surrounds in the north and east walls. It is entered from the chancel through a contemporary 2-centred doorway, and from the yard through a 4-centred doorway in a square surround, also from 1877. A blocked fireplace lies in the south-east corner, its chimney now gone. The softwood lean-to roof continues the chancel roof northern slope.

Surrounding external surfaces were truncated in 1877 exposing footings throughout. Floors were formerly suspended over heating ducts, and there was a former below-ground heating chamber. No external memorials lie significantly close to church.

The nave has markedly thick walls with a pronounced external batter and it may be 12th century, judging by the form of the original chancel arch. The chancel was probably rebuilt in the 13th – 14th century. The west tower appears medieval but was added in the mid-19th century, and the vestry is from 1877.

In 1810 the church was as ‘consisting simply of nave and chancel’ (Crossley and Ridgway, 1946, 55); this is repeated by Lewis, 1833 and no tower is shown on the tithe map of 1841 (NLW, Llanwnnen, 1841). In the chancel arch was a carved timber rood-screen ‘like that at Llanafan’ and the rood-loft steps were still visible.

The west tower had been added by 1875 (NLW, SD/F/437). Contemporary drawings show that it had a plain crenellated parapet, on a projecting string-course; there was a plain 2-centred opening in the east face of the belfry (other faces are not shown). The chancel, arch was tall, semicircular and possibly the original arch, from the 12th century?. The nave was lit by 2 ?medieval 2-light windows in the south wall, and there was a 3-light window in the east wall. The nave west door was 2-centred and medieval. The nave was ceiled, with a semicircular profile and the chancel had a similar ceiling with a 2-centred profile. It has been suggested (doubtfully?) that the roofs were still thatched (Clive Powell, 1996, 1).

The church was restored in 1877 (ibid.) to the designs of the architect R. J. Withers of London. The vestry was built. The upper halves of the nave and chancel walls were rebuilt, the church was refenestrated and the chancel arch, and the nave west door, were replaced. The sedilia was inserted, and new windows inserted in the nave north wall and chancel south wall. The west tower string course and doorway were partly rebuilt, and new lights and openings inserted; the parapet was rebuilt with corbel table and crow-stepped crenellations. The church was reroofed, refloored, replastered and reseated. A ‘Porritt’s’ heating stove was installed, and the flue in the vestry east wall carried a moulded octagonal chimney.

The nave floor was relaid over the disused heating chamber, in the early 20th century?, and the vestry chimney was removed.

The limestone font has an octagonal bowl, possibly the one seen in 1810 (Crossley and Ridgway, 1946, 55) but modern in appearance, and an octagonal stem and base.

St Lucia, Llanwnnen, was not a parish church during the medieval period (Rees, 1932), but a chapelry of the medieval Deanery of Sub-Aeron. It appears always to have been a possession of the Bishop of St Davids.

In 1833 the living, a discharged vicarage with that of Silian consolidated, was rated in the king’s books at £3 4s 9½d, endowed with £400 royal bounty and £400 parliamentary grant and in the patronage of the Bishops of St Davids (ibid.). The tithes were divided between the Bishop and the vicar.

In 1998 St Lucia, Llanwnnen, was a parish church. The living was a vicarage (no benefice no.) in the Archdeaconry of Cardigan, Rural Deanery of Lampeter and Ultra Aeron (St Davids, 1997-8).