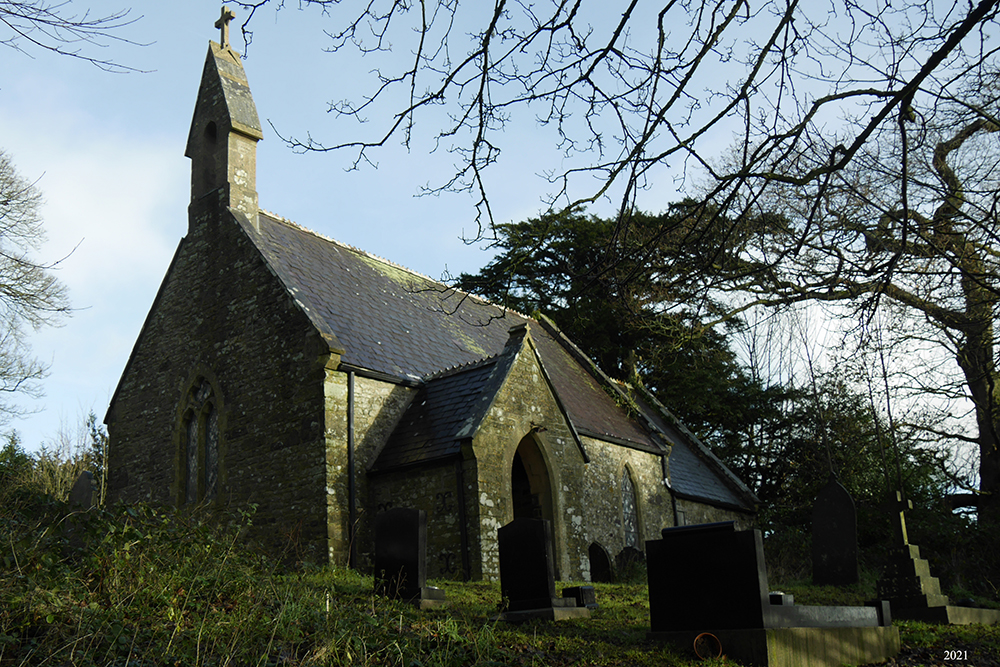 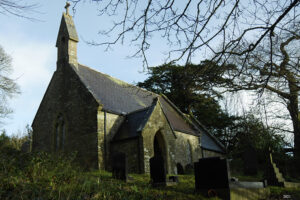 The present church consists of a 2-bayed chancel, a 3-bayed nave, a single-bayed north transept and a south porch. Construction is in limestone rubble. The north transept is vaulted. All openings are in yellow oolite, neo-Gothic, from the late 19th century. There are remains of external render, probably from the early 19th century; repointing is mainly from the late 19th – earlier 20th century and is poor, obscuring masonry, but there is some better 20th century repointing; the interior is plastered. Roofs are slated gables.

The north transept may have been partly rebuilt, and was entirely refaced in roughly squared and coursed rubble, in the late 19th century. It is lit by a contemporary single lancet in the north wall, like those in the nave. The transept is barrel-vaulted, with a 2-centred profile; the vault appears to be medieval but may have been rebuilt/restored. Floored as the nave. The transept has latterly been used as a vestry.

The upper courses of the south porch side walls were also rebuilt in the late 19th century, and the south, end wall was refaced. The entry has a contemporary, 2-centred arch like the nave south door. The softwood roof lacks trusses and is matchboarded, from the late 19th century. The floor is limestone-flagged, possibly from the earlier 19th century and laid directly on the substrate.

The church lies upon a terrace cut from and banked within the sloping churchyard; primary. A medium-deep external earth-cutting runs around the north walls, primary, but secondarily deepened. Floors are suspended in the nave and transept. External memorials lie significantly close to the east and south walls, and may lie in the undergrowth close to the north wall.

The church cannot be closely dated in the absence of original detail, and the percentage of surviving pre-19th century fabric is difficult to assess. The nave is quoined, and may be earlier than the chancel which is the same width. The vaulted north transept is probably from the 14th century when such additions were under widespread construction. The south porch may not be a pre-19th century component (see below).

According to Samuel Lewis, writing in 1833, the church had been ‘rebuilt within the last 40 years’ as a ‘neat edifice’ (Lewis, 1833); the extent of this ‘rebuilding’ is not known but the external render, the chancel arch and the south porch may be from this period.

The church was restored again in the later 19th century, but neither the details, nor the architect responsible, are known. The RCAHM viewed the restoration as a rebuild, describing the church as ‘modern’, but ‘probably stands on the old foundations’, and retaining ‘nothing of antiquarian interest’ (RCAHM, 1925, 164). The north transept and south porch were refaced, possibly even partly rebuilt, and the building was entirely refenestrated. The doorways were also rebuilt. The interior was reroofed, refloored and replastered.

The softwood pews, vestry screen and pulpit are from the late 19th century; fittings were in poor condition in 1996.

The font has an plain limestone bowl of indeterminate date; the square base is modern (RCAHM, 1925, 164).

There is no bell.

Documentary sources for the medieval church have the separate Dyfed PRN 4904.

St Mallteg, Llanfallteg, was a parish church during the post-conquest period (Rees, 1932), of the medieval Deanery of Carmarthen. It appears to have always been a possession of the Bishops of St Davids; William Mone was collated as chaplain ton the parish church of ‘Llanveyltheg’ by Bishop Guy de Mone in 1398 (RCAHM, 1925, 164).

In 1998 St Mallteg, Llanfallteg, was a parish church but was closed. With Castell Dwyran it formed part of the benefice of Clunderwen (Benefice no. 825) in the Archdeaconry of Carmarthen, Rural Deanery of St Clears (St Davids, 1997-8).