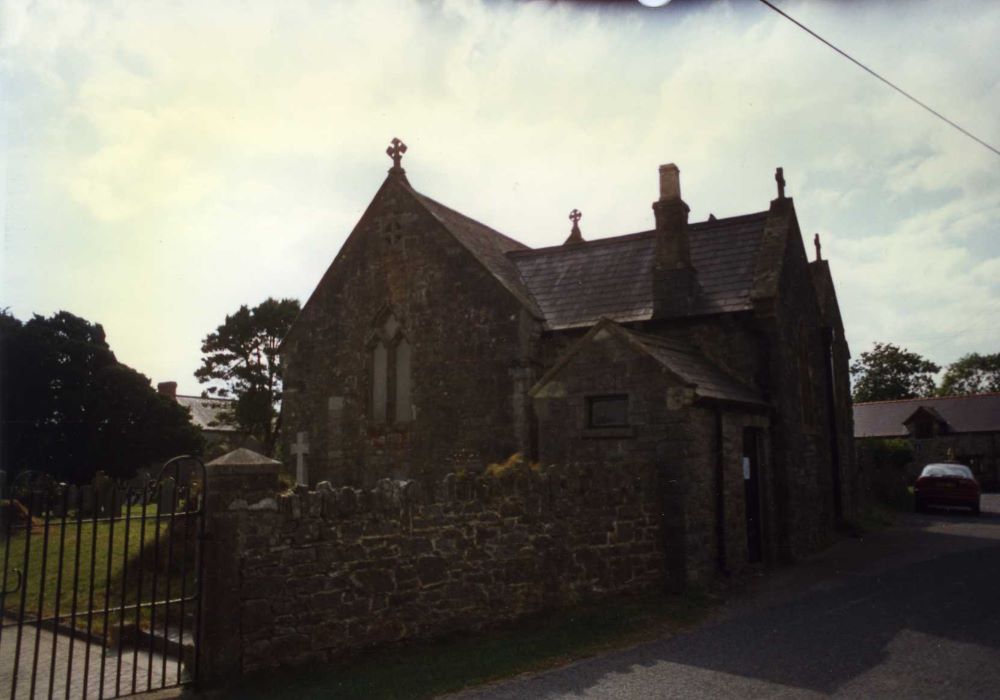 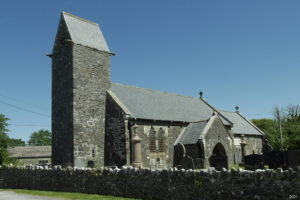 The present church consists of a 2-bayed chancel with a ‘choir-recess’, a 3-bayed nave, a south porch, a 3-storeyed, saddleback, west tower, single-bayed, transeptal (and adjoining) vestry and organ chamber, and a boilerhouse transeptal from the vestry east wall. Former shed between nave and vestry. Construction is in limestone rubble. There are some medieval openings in Old Red Sandstone and limestone; other openings are from 1869, in grey oolite, and from 1891, in yellow oolite. External pointing is largely incised, from the 20th century, and the interior is plastered. Roofs are slated gables throughout.

The chancel east wall was partially rebuilt and requoined in 1869. The east window has 2 ogival cusped lights and a quatrefoil-pierced spandrel, Decorated, in chamfered Old Rd Sandstone from the later 14th century. There is an internal, plain, 2-centred aumbry north of the window. The east bay north wall is pierced by a  simple, single narrow light now looking into the vestry, with a semicircular head and a splayed, square-headed embrasure,  15th century?; a similar light in the south wall has a plain chamfered limestone surround. The south wall of the west bay is produced as an external square projection, coped back to the main wall face, with a corresponding internal recess lying beneath a segmental arch and lit by a similar light to those in the east bay side walls; the whole forms a ‘choir recess’ similar to those seen in a number of Pembrokeshire churches, and is from the 15th century, but was refaced externally in squared and coursed limestone in 1869. The plain, chamfered 2-centred chancel arch is from 1869, and features a contemporary low, moulded screen wall; the external face above the arch was refaced in 1869. The softwood roof is from 1869, with 2 simple king-post trusses arch-braced from wall corbels and matchboarded above. The passages are tiled, with suspended board floors, from 1869.

The nave side walls have an external basal batter; the south wall was refaced in squared and coursed limestone in 1869. There is a plain-cusped single lancet in the north wall, and 2 windows in the south wall which are similar, but of 2 and 3 lights; all are entirely from 1869. The south door has a 2-centred surround and drip-mould all from 1869; to the east is an internal stoup with a 2-centred head and a plain square bowl, 14th century?. The north wall is pierced by ventilation through-shafts, also from 1869. The nave roof is like that in the chancel, from 1869. Floored as the chancel.

The south porch is medieval, but the door was rebuilt as a plain, 2-centred arch in 1869; the side walls have internal masonry benching also from 1869. The simple softwood roof is from 1869, as is the quarry-tiled floor laid directly on the substrate.

The ‘saddleback’ west tower is very small and slender, and unusual within the region. It has been accepted by most authors as being late, possibly c.1600. It is slightly tapered and lacks the external batter, string-course and spiral stair turret typical of the region. The ground floor is entered the nave through a doorway with a 2-centred surround, entirely rebuilt in 1869; above it is a blocked opening, square, c.1600. There is a simple, square single light in each of the other 3 walls, from c.1600; those to the north and south have been enlarged, in 20th century concrete. The flat board ceiling is supported on corbels from 1869. Floored as the nave. The second stage was lit by a deep, narrow slit light in the north and south walls, now blocked. There is a larger slit in the north, south and west faces of the belfry, from c.1600, with louvres, and a contemporary single-lancet in the east face. The belfry is gabled, with rainwater chutes from the 20th century; in the western apex is a lancet like that in the east wall.

The vestry and organ chamber were added in 1891 and a section of the churchyard wall was removed to make way for them. They form a ‘double-pile’ transept from the chancel north wall, both gabled, and divided by a thin internal wall with a plain, square doorway. The vestry is entered from the chancel through a door with a 2-centred surround, all from 1891, while the organ chamber is open to the chancel west bay. The vestry is entered from the churchyard through a 2-centred doorway in the east wall, and lit by a cusped 2-light window, with a quatrefoil-pierced spandrel, in the north (gable) wall, both from 1891; there is contemporary fireplace in the east wall with a square stack and a ceramic pot. The organ chamber is divided, by a east-west wall into the organ chamber proper to the south, which is lit by an single cusped lancet in its east wall, and a vestry annexe to the north which is lit by in identical window to that in the vestry in its north (gable) wall. Both vestry and organ chamber half simple softwood collar rafter roofs beneath matchboarding, from 1891. The floor is fully carpeted, void below?.

The boilerhouse may also be from 1891 but is in snecked limestone rubble. There is a simple square window in the east (gable) wall, and a segmental-headed doorway in the north wall. It shares a flue with the vestry. The roof is a softwood gable; the floor may be below ground level.

A lean-to storehouse lay between the organ-chamber west wall and the nave until the 1990s when it was removed. The churchyard wall formed the north wall, and included an entry that was blocked in the 1990s. scar of the roof-crease survives on the nave north wall. The floor was below ground level but is choked with demolition debris

A narrow, shallow external drain runs around the nave south wall and tower, becoming wider along the nave north wall; secondary. The former shed, and boilerhouse? floors are below ground. The vestry/organ chamber north wall lies beyond the churchyard boundary wall. Floors are suspended over a void in the chancel, nave, tower, and vestry/organ chamber. Some external memorials lie significantly close to the south, east and west walls.

The nave may be 13th century, if the description of the pre-restoration chancel arch (below) is accurate. The chancel has a fine 14th century east window and was probably an addition of this date. The side wall windows, despite a superficial Romanesque appearance, are probably 15th century and similar to openings of a similar date in the aisles at Carew, S. Pembs.. There were formerly 2 ‘choir-recesses’, a unique feature in Carmarthenshire but a frequent occurrence in Pembrokeshire churches eg. Herbrandston and Johnston, Pres..; they too were probably 15th century and a joint can be seen between the southern recess and the nave. The south porch may also be 15th century in origin. The tower is from c.1600; it is unusual in the region, the closest parallel being the roughly contemporary saddleback tower at St Ishmaels, Carms. (which, however, is vaulted and incorporates the church entrance), although the towers at eg. Castlemartin and Ludchurch, both S. Pembs., were formerly saddlebacked. There was one bell in 1552 (Wallcott, 1871, ii) and in 1720 (Evans, 1921(ii), 16), as there is today (Price, n.d., 11).

An account of 1861 describes the church as comprising a chancel, nave, west tower and south porch (Glynne, 1898, 367). The ‘pointed’ chancel arch was ‘rude and small’ (cf. Mary Curtis’ description of it as ‘rounded’, reproduced in RCAHM, 1917, 237). The Decorated east window is mentioned; there were ‘no windows at all’ on the north side (the 15th century chancel window being blocked) and the southern windows were ‘mostly bad modern ones’ but there was ‘one small obtuse-headed one, now blocked, on the south of the chancel’. There were two ‘choir recesses’. The church overall was ‘somewhat dilapidated’.

The church was ‘restored in 1869 (RCAHM, 1917, 237), to the designs of the architect John Pritchard of Llandaff (Anon., n.d., 4). The nave was refenestrated, its doors were rebuilt and the chancel arch was similarly rebuilt. The chancel side wall windows were unblocked. The church was reroofed, refloored and replastered.

The vestry and organ chamber were added in 1891, the date of the organ itself, removing the northern ‘choir-recess’. The boilerhouse may be contemporary, the heating apparatus recorded as having been installed in 1932 (Carms R.O, CPR/42/10), low pressure with an asbestos chimney, probably refers to the lean-to north of the nave that was demolished in the 1990s.

The sanctuary fittings, the softwood stalls and pews, and the oolite pulpit, are from 1869 (Anon., n.d., 4). The iron rainwater goods are also from 1869, the guttering being supported on oolite corbels. The softwood porch screen may be later. The organ is dated 1891.

The heptagonal limestone, scalloped font bowl may be late 14th century, with a cylindrical stem which may be earlier.

St Margaret, Pendine, was not a parish church during the post-conquest period (Rees, 1932), but a chapelry of the medieval Deanery of Carmarthen.

Pendine had become a parish by 1833 when the living was a discharged rectory annexed to that of Llandawke (Lewis, 1833).

In 1998 St Margaret, Pendine, was a parish church. The living was a rectory, held with Marros, Llanmiloe and Eglwys Gymyn (Benefice no. 641) in the Archdeaconry of Carmarthen, Rural Deanery of St Clears (St Davids, 1997-8).

The St Margaret of the dedication is probably St Margaret of Antioch, but local tradition has it that Margaret Marlos, niece of the 14th century Lord of Laugharne Guy de Brian, is commemorated.