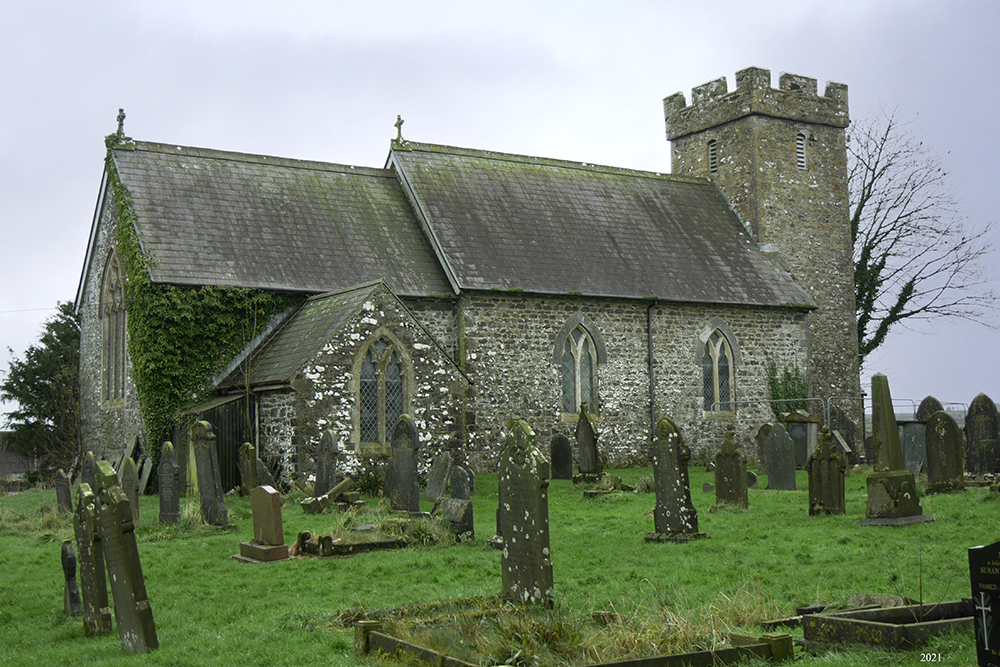 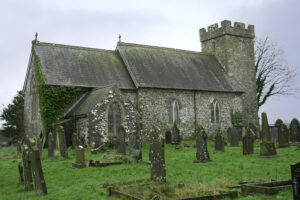 St Martin of Tours, Clarbeston, is a 3-celled church, of small-medium size. It was almost entirely rebuilt in 1840-41 (Evans, 1917, 7; Green, 1911, 278; RCAHM, 1925, 72) retaining only approximately 5% of the earlier (medieval?) fabric, represented by the lowest courses of the chancel and nave (but including the facework), and possibly rather more in the west tower.

The present church consists of a 2-bayed chancel, a wider 2-bayed nave, a single bayed transeptal vestry north of the chancel and a 2-storey west tower which includes the church entrance. There is a small shed north of the chancel in the angle with the vestry east wall. Construction above the lowest (medieval) courses is in medium-sized limestone rubble, unsquared but roughly coursed, with ashlar quoins; the medieval courses are cruder. Good lime pointing, 1840-41, with poor cement repointing on the west tower, 20th century. Internal render/plaster, 1840-41, reskimmed in the 20th century?. Roofs are slated gables throughout, the nave always roofed at a higher level; the west tower roof was not seen.

There is a pronounced ‘D’-shaped earthwork platform east of the chancel, primary make-up?, former component?, which runs around the south wall to merge with irregular burial earthworks along the nave south wall (include some building debris?). A shallow soakaway runs along the nave and west tower north walls, and the south-west part of the church. There is no evidence for floor level changes. The floors are not suspended and lack an underfloor void. No internal crypt/vault is evident. Many memorials, from the late 18th century – 1864, are significantly close to the south and east walls.

The chancel retains just the lowest course of the medieval fabric; the remainder is from 1840-41. The east window has 3 ogee-headed lights with curvilinear tracery in a 2-centred surround with dripmould, of oolite, and all de novo in 1892?. A similar window lies in the west bay south wall, but is 2-light with a central quatrefoil, lacks the drip-mould and was inserted in 1892 into an opening from 1840-41 (see below). The chancel arch is plain and 2-centred, from 1840-41. The chancel roof has a tie-beam at the wall-heads, above which the common rafters all have arch-braced collars with queen-posts, and curved ashlar posts, forming a semi-circular profile; all in softwood, from 1892 and without weather tabling. The woodblock flooring is laid on concrete, from 1892; the tiled east bay floor, and passage, may also be from 1892.

The nave is of similar construction and of the same date, but retains an average of 3 courses of the medieval fabric, with crude weathered quoins. There are 2 windows in each of the side walls, all with cusped oolite Y-tracery in 2-centred surrounds, inserted in 1892 into openings from 1840-42. The softwood roof is also from 1892 and features a tie-beam as in the chancel, and collared common-rafters with scissors-braces and ashlar posts. The woodblock floors and tiled passages are as in the chancel, all 1892?

The low 2-storey west tower was also rebuilt in 1840-41 but may retain more medieval fabric in its lower stage. It lacks a stair turret, external basal batter and string-course, and has been re-quoined in ashlar, 1840-41. The ground floor represents the entrance to the church and the west door has a simple, 2-centred head from 1840-41; a simple external recess above contains a plaque recording the 1840-41 rebuild. The entrance into the nave is a simple square-headed doorway, an 1840-41 rebuild of a medieval original?. The ground floor is ceiled in plasterboard, 20th century, with a hatch and pierced for 1 bellrope. The floor was limestone flagged directly on the substrate in 1840-41. The belfry stage is entirely from 1840-41; it is represented on the nave west wall by an offset forming the sill of a plain square doorway into the belfry, now blocked in timber. Externally, each face has a single opening with a depressed ogee head, without surrounds. The crenellated parapet lies on a plain string course. The tower is in good condition.

The church as rebuilt in 1840-41 more-or-less resembled its present form (NLW, SD/F/121). However, there was a west gallery, and the present side window embrasures contained timber-framed windows. The seating was probably of box-pews. The detailed arrangements in the pre-1840 church, and their form, are not known.

The church was restored in 1892 (ibid.)., to the specifications of Kempson & Fowler, Architects, at an estimated cost of £700. The restoration was low impact. The church was re-roofed (without tabling) and the nave was refloored with the roof and flooring now present; the chancel floor and nave passages are not mentioned in the specs. but may have received their present tiled surfaces. The present side windows were fitted in the existing embrasures, but the east window was proposed to be entirely new. The gallery and pews were removed and the present softwood seating fitted, along with the stalls, altar rail and pulpit. The plaster was only renewed where it had been disturbed. The font was moved to its present position. A vestry had been proposed, but was not built.

The vestry was eventually constructed north of the chancel in 1932 (Pembs. R. O., HPR/88/8), in much the same style as the rest of the church. It is transeptal, lit through the north gable wall by a window like the chancel south wall window of 1892. The doorway into the chancel west bay has a simple 2-centred head. The common rafters of the softwood gable roof are all scissors-braces and have ashlar posts. The floor is woodblock, in the style of the 1892 work.

There has been little further work. The tower was repointed with cement in the 20th century, and the interior appears to have been reskimmed. The lean-to corrugated iron shed in the angle between the chancel north wall and the vestry east wall was constructed during the mid-20th century.

There no firm evidence for any pre-conquest religious use of the site.

St Martin of Tours, Clarbeston, was a parish church during the post-conquest period, of the medieval Deanery of Rhos (Rees, 1932). The benefice was a perpetual curacy. It was granted, as ‘ecclesiam Sancti Martini de Villa Clarenbaldi’, to the Knight Hospitaller of Slebech Commandery by Wizo, Lord of Wiston, his son Walter and grandson, also Walter, c.1130 (Green, 1911, 277). There was no separate valuation of the church in the ‘Taxatio’ of 1291 but in 1536 it had an annual value of £6 (ibid.).

At the dissolution Slebech Commandery, and all its appurtenances including the patronage of Llanfyrnach rectory, fell to King Henry VIII. The parsonage was with Thomas Awdley in 1580 (Anon., 1896, 260). The curacy was still in royal hands in 1594, but by the 17th century the patronage had been acquired by the Stepneys.

The Stepneys also acquired the tithes of Clarbeston. They were, c.1645-9, owned by Sir John Stepney, Bart. The inhabitants of the parish petitioned the Commonwealth for an augmentation for their minister, their maintenance being only £10 a year, while the tithes were worth £21. Sir John was fined and ordered to settle (ibid.).

In 1998 St Martin of Tours, Clarbeston, was a parish church. The living was a vicarage, held with Wiston and Walton East (Benefice 818), in the Archdeaconry of St Davids, Rural Deanery of Daugleddau (St Davids, 1997-8).