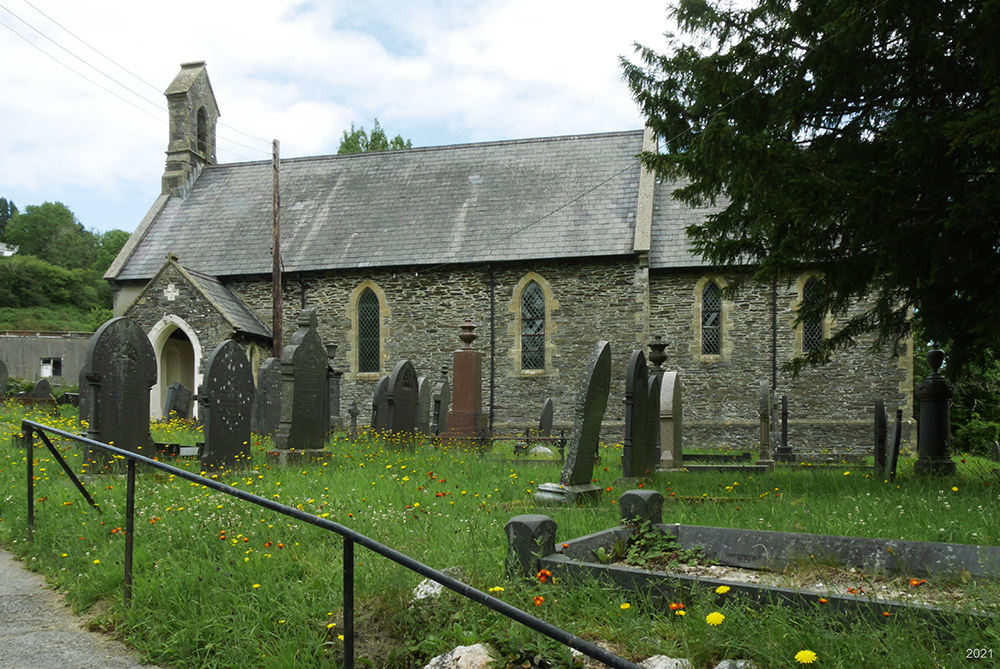 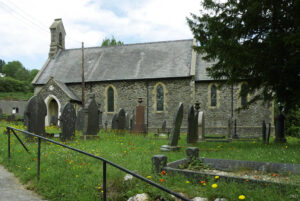 19th century church; 0% medieval core fabric. On site of, and in same location as?, medieval church.

Archaeological potential – good. Platform beneath 25% of church; no external drain or cutting; suspended floors in 50% of church.

St Mary, Pencader, is a 3-celled church, of small size. It was built in c.1883 on the same site, and probably in the same location as a ruined medieval church; nothing was retained from any earlier fabric.

The present church consists of a 2-bayed chancel, a 3-bayed nave, a south porch and a single-bayed vestry north of the chancel west bay. Construction is in random shaley slate rubble throughout, with oolite ashlar quoins. Pointing is from c.1883 and some poor 20th century repointing on the north walls; the west wall is rendered externally, early 20th century. Openings are neo-Gothic; the windows are uncusped, simple single lancets, with yellow oolite dressings, all c.1883. A chamfered oolite offset runs around all external walls. The nave west wall carries a gabled, shouldered, single bellcote on a string-course, c.1883. The roofs are slated gables; the vestry has a slated lean-to roof. The floors are suspended.

The earlier church (properly a chapel) was described in 1710 as ‘ruined, and most of the stones taken away; there is a meeting-house erected just by the churchyard, and a great part of the stones belonging to the chapell being removed… they were employed about the meeting-house, which… appears to be built in July, 1705’ (RCAHM, 1917, 136).

The site, and probably the location of the medieval church was re-used when the present church was constructed in c.1883. There has been no major alteration to the church.

The font has a circular bowl and a cylindrical stem from one piece of limestone, 13th – 14th century?, which lay in the churchyard at Llanfihangel-ar-arth until c.1883 but was said to be derived from the medieval church at Pencader (Anon., 1878, 345); the base is modern.

A D-shaped earthwork platform lies beneath the east end of the church; there is no corresponding cutting around the west end. There is no external drain. Floors are suspended over a void in the nave and vestry, the floor of the latter being raised above churchyard level.

St Mary, Pencader, as ‘Capel Mair’, was a chapelry, with burial rights, to Llanfihangel-ar-arth parish during the post-conquest period (Rees, 1932), of the medieval Deanery of Carmarthen. It had become abandoned by the late 17th century and was ‘ruined’ in 1710 (RCAHM, 1917, 135), but the churchyard and cemetery were ‘preserved from desecration’ (Lewis, 1833); the churchyard was empty of buildings in 1841 (NLW, Llanfihangel-ar-arth, Tithe Map, 1841).

The site was restored to ecclesiastical use c.1883 with the construction of the present church and the resumption of burial (Carms. R. O., CPR/67).