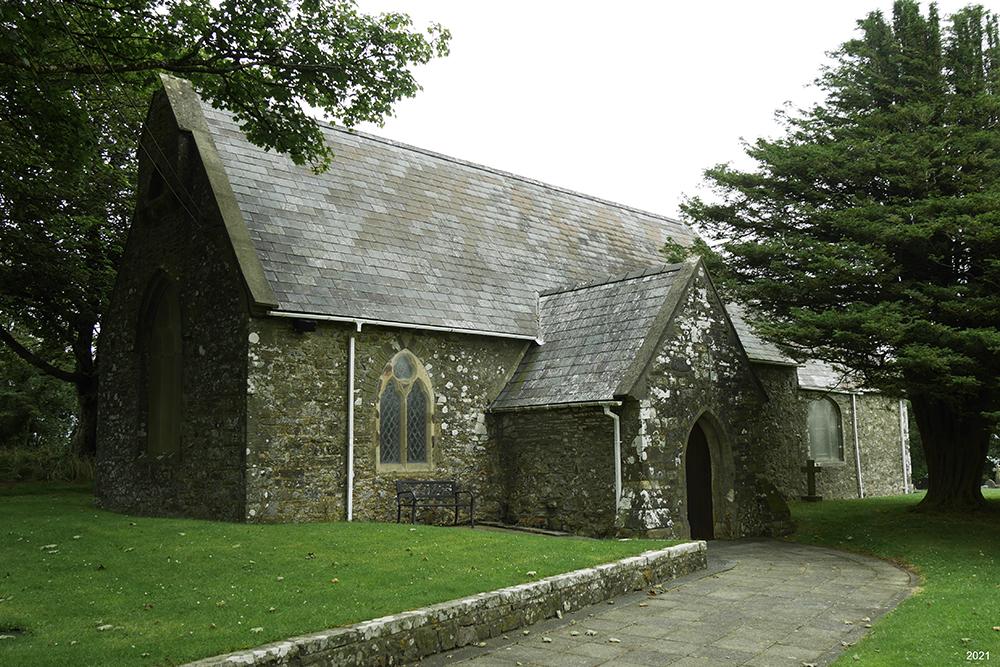 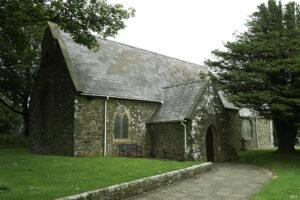 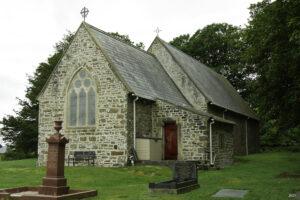 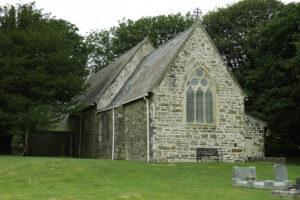 The present church consists of a long, 2-bayed chancel, a wider 4-bayed nave, a single bayed lean-to vestry north of the chancel west bay, with an annexe under construction against its east wall, and a south porch. There was formerly a 2-bayed (medieval) south aisle south of the chancel west bay and the nave east bay. The medieval facework is largely in medium-large rhyolite rubble, unsquared and uncoursed, without quoining; 1861 work is in squared, coursed limestone rubble, with quoins. Good mortar pointing, 1861; the medieval work exhibits remains of render from c.1800, and there are areas of 20th century ribbon repointing. The internal walls are rendered/plastered, from 1861 with some 1968 replastering. Roofs are slated gables, the nave roofed at a higher level than the chancel; the vestry roof is a slated lean-to continuing the chancel northern roof slope.

The chancel was largely rebuilt in 1861, including the entire east wall with a plain basal offset, and much of the north wall. The east window has 3 cusped lights with simple Geometric tracery in a 2 centred oolite surround, all new in 1861. A recess in the south wall of the east bay was revealed during replastering in 1968; it has a segmental head and splayed reveals, apparently representing a former sedilia (Canon A. Craven, Roch, pers. comm.) but possibly a blocked window. The west bay north wall features a plain, 2-centred doorway into the vestry, from 1904, to the west of which a blocked medieval lancet with a robbed surround is visible externally, blocked by 1858. The south wall dog-legs out to create a wider west bay, where the east bay of the former south aisle butted against the chancel. The chancel arch is a plain, full-centred semicircular arch, from 1798; the walling is thicker either side of the arch than above it. The softwood chancel roof features scissors-braced trusses, from 1868. The floor was marble-flagged in 1976 (Canon A. Craven, Roch, pers. comm.); there is a possible vault beneath the east bay. The present wrought-iron altar rail is from 1768 (Pembs. R. O., HPR/32/2; 1859 according to Cadw, 1997, 4). The commandment tablets are late 18th century (Canon A. Craven, Roch, pers. comm.).

The nave north wall was largely refaced in limestone rubble in 1861. There was formerly a north door (Canon A. Craven, Roch, pers. comm.), but the structural evidence has been obscured; it had been blocked by 1858 (Pembs. R. O., HPR/32/86) and was represented by a recess, now gone. The south door has a 2-centred surround, rebuilt in 1861. There are 2 windows each side wall, each of 2 cusped lights with a trefoil-pierced spandrel in a 2-centred oolite surround, from 1861 and including infill in the south wall windows. The west window has 3 cusped lights with neo-Perpendicular tracery in a 2-centred oolite surround and drip-mould, possibly by W. D. Caröe in c.1920 (Cadw, 1997, 4). Above it lies the bellcote, on an external corbel-table from 1861; the upper sections have been truncated and the gable now lies at the same level as the roof apex, with a single, 2-centred opening, but 2 bells. The nave has a softwood princess-post roof, arch-braced from the wall-plate, from 1868. The passages are flagged in limestone, from 1861 but possibly re-using earlier flags, with suspended board floors.

The former south aisle comprised 2 bays that communicated with both chancel and nave through an arcade of 2 plain, 4-centred arches in their west and east bays respectively. The arches are visible externally and the eastern of the two is represented internally by a recess in the chancel south wall, plain, and with a similar profile; the octagonal pier between the 2 arches is still visible and, like the chamfered stops, has a plain impost. The arcade is early 16th century and was blocked when the aisle was removed in 1798; the blocking is in rhyolite and limestone rubble, and displays remnants of external render from c.1800. The chancel blocking is pierced by a window of 3 cusped lights in a 4-centred oolite surround, inserted in 1920 to replace a 2-light window of 1861 (Pembs. R. O., HPR/32/86); the nave blocking is pierced by one of the 1861 windows described above.

The south porch is vaulted with a transverse rib-vault, unusual for the region (but also seen at Nolton), Perpendicular in style and dateable to the earlier 16th century. The side walls feature internal benching. The south wall was rebuilt/refaced in 1861 along with the 2-centred doorway and the low, clasping buttresses. At the north end of the east wall is a large stone and an area of patching that may represent second, blocked door (again cf. Nolton). Floored, directly on the substrate, as the nave.

The church is built upon a platform, defined by a scarp slope parallel to, and 2m beyond the east and south walls. A shallow-medium depth earth-cut cutting surrounds the church except the east wall, exposing footings in areas; within it lies a 20th century concrete drain. Floors have been raised throughout, except the porch; they are suspended, with an underfloor void. There is a possible vault beneath the chancel floor. There was formerly a south aisle. A former external chest-tomb lies between the nave and the south porch west wall.

The church has been much rebuilt from the 18th century onwards but the basic plan of chancel, nave and south porch follows the medieval arrangements. The medieval building was entered through north and south doors in the nave. A south aisle was formerly present, but has been removed. The chancel and nave are impossible to date closely, all openings, including the chancel arch, and much of the fabric itself having been rebuilt. The former south aisle communicated with both the chancel and nave through 4-centred arches of early 16th century date; the rib-vaulted south porch is also from the earlier 16th century and may or may not be contemporary. The church bears many similarities with that at nearby Nolton, whose history of patronage it largely shares; both are have simple plans with former southern components, rib-vaulted south porches, north and south doors and 18th century rebuilt chancel arches (the porches are similar enough to be the work of the same hand). The vestry was added in c.1904.

There is a wealth of contemporary documentation regarding the post-medieval form and development of the church. Churchwardens’ accounts from the early 18th century record the usual small scale repairs, including repairs to the bell, the pulpit and reading desk in 1720 (Pembs. R. O., HPR/32/1), when the ‘south aisle window’ was also mentioned. In 1767 the church was entirely reseated, including the former south aisle, and the floors of the chancel and nave were raised and flagged (Pembs. R. O., HPR/32/2). It was also proposed that a new window be inserted ‘near the new pulpit’, presumably in the nave south wall (see Fenton’s account below). At the same time the present altar rail, and a new altar table were fitted; the manufacture of a new font bowl was also proposed but does not appear to have been carried out.

The south aisle was removed in 1798-9 and its seating moved into the chancel (Green, 1913, 264, and RCAHM, 1935, 311, both mistakenly give the date as 1698). The parish registers make it clear that the aisle had been gabled parallel with the nave and chancel as recently as 1767 but was, at the time of its removal, lean-to roofed. The chancel arch was rebuilt in its present form, higher than the original arch, and the chancel floor was raised, in 1799.

In c.1811 the church was described by the antiquary Richard Fenton in more-or-less its present form, as ‘a plain building consisting of a nave and chancel’; the chancel arch was the present ‘low unornamented round arch’ and the vaulted south porch was noted, its ‘very ancient doorway’ since rebuilt (Fenton, 1903, 83). There was, apparently, only one window on the north side, ‘wrought with stone tracery’. It was a ‘plain, neat edifice’ in 1833 (Lewis, 1833).

Entirely new roofs were constructed in 1837 (Pembs. R. O., HPR/32/18), but the church was described as ‘dilapidated’ in 1839 (ibid.). The Faculty bundle for the 1861 restoration (Pembs. R. O., HPR/32/86), includes a plan in which some of the features of church as it existed were shown, including 3 (or possibly 4) single-light windows in the nave north wall, and 1 (or possibly 2) similar windows in its south wall, presumably inserted after 1811 along with the blocking of the traceried window mentioned by Fenton (see above). There was also a 2-light window in the west wall, but the form of the other openings cannot be discerned from the plan. The tithe map of 1837 (NLW, Roch, 1837) is unusually detailed and appears to show a north aisle the entire length of the nave, but there is no further evidence for this, either structural or documentary.

The church was restored in 1861 (Canon A. Craven, Roch, pers. comm.), to specifications submitted by the architect R. Kyrke Penson, of Swansea, for a Faculty granted in 1858 (Pembs. R. O., HPR/32/86). The restoration was high-impact. The west gallery, and all fittings were removed. The chancel was largely rebuilt and the nave north wall refaced. The church was entirely refenestrated disregarding existing openings. The south door and south porch door were rebuilt, and the porch was buttressed. A bellcote was erected, but was later truncated (Canon A. Craven, Roch, pers. comm.). The church was replastered, all the existing plaster presumably having been removed. The nave was received its present softwood pews. The present roofs were apparently not erected until 1868 (Canon A. Craven, Roch, pers. comm.), presumably with the tabling, to the specs. of 1858; the roofs were repaired in 1870 (Pembs. R. O., HPR/32/18).

The lean-to vestry, to the designs of D. E. Thomas (Cadw, 1997, 4) was built against the north wall of the chancel west bay in c.1904 (Pembs. R. O., HPR/32/87), in large limestone rubble. It is entered from the outside through a doorway with a Caernarfon-headed oolite surround in its east wall, and has a similar 2-light window, with a square surround. The floor may be suspended.

The chancel was refloored in 1976 (Canon A. Craven, Roch, pers. comm.), when the oak stalls and desk were fitted.

A small, corrugated iron lean-to shed was built between the external north-east angle of the nave and the vestry west wall in the later 20th century. In October 1997, an annexe was under construction between the vestry east wall and the chancel north wall, with breeze-block foundation courses and a concrete floor.

The limestone font is medieval, with a square cushioned bowl, cylindrical stem, and square base, of late 12th-early 13th century date.

A weathered canopied cross-head lies loose in the porch (RCAHM, 1925, 311), with moulded figures on the 4 facets, including the Virgin, the crucifixion, and a mitred bishop; later medieval. It is probably the same ‘stone which had recently been found in Roch churchyard bearing sculptured figures’ in 1898 (Anon., 1898, 185). 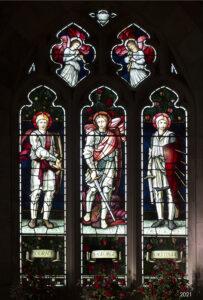 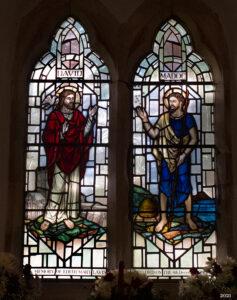 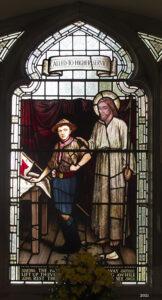 All three windows were produced around the First Word War and are all by C C Powell.