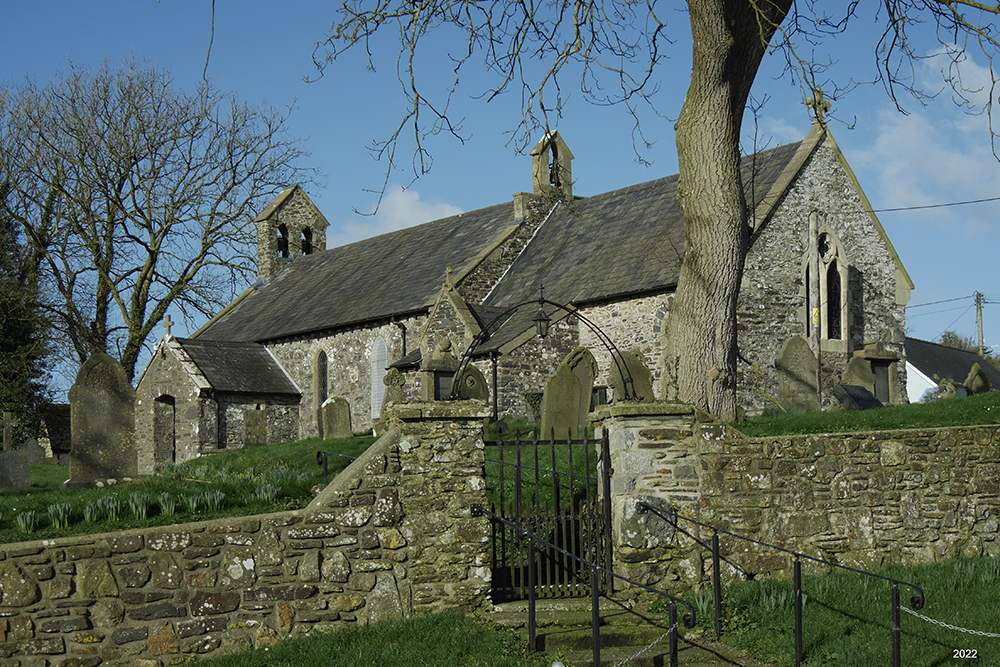 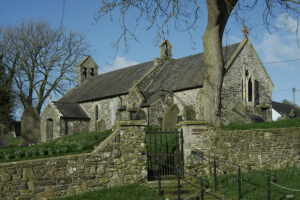 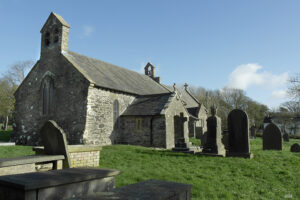 The present church consists of a 3-bayed chancel, a 4-bayed nave, a single-bayed vestry south of the chancel west bay, and a south porch. A north transept, and possibly a south chapel were formerly present. Construction is in limestone rubble. The chancel arch and squints, the south door and blocked north door, the western double bellcote, and a tomb recess/Easter sepulchre, are medieval. The chancel side windows may retain some medieval dressings. There is a blocked arch, from the 17th century?. Other openings are mainly from 1861, in neo-Gothic (early English) style, with yellow oolite dressings; the sanctus bellcote is contemporary. Pointing is mainly from 1897-8, slightly ribboned, with limited 20th century repointing, and the interior is plastered. Roofs are slated gables; the vestry has a slated lean-to roof with a central gablet.

The chancel east wall gable, and the upper courses of the side walls, were rebuilt in roughly coursed rubble in 1861. The east window has 2 cusped lights with a central quatrefoil, in chamfered yellow oolite from 1861. There are 2 windows in the north wall, and one in the south wall; all single cusped lancets also in chamfered yellow oolite from 1861 but probably re-using some medieval dressings; the southern window-sill incorporates a circular piscina bowl from 1861. A possible blocked light lies between the 2 northern windows, above an attached, undated external chest tomb. Internally, a recess in the north wall occupies this central bay; it is plain, with a near-semicircular segmental head, and is probably from the 15th century, and may represent either an Easter sepulchre or a tomb recess. The plain, 2-centred chancel arch, with square stops deeply chamfered to the west, is medieval, probably from the 14th century; either side is a tall, plain 2-centred squint, the southern of which is smaller and square-headed to the east, but which are probably contemporary and also 14th century. A sanctus bellcote lies on the gable above; the bellcote is single, gabled and shouldered, with a 2-centred opening, all in oolite ashlar and from 1861. The softwood roof is from either 1861 or 1897-8 and lacks trusses, all rafters being collared and braced. The passage and sanctuary are polychrome-tiled, from 1897-8 with contemporary woodblock flooring.

The nave is lit by 2 windows in the north wall and 3 in the south wall; all are single lancets like those in the chancel, but entirely from 1861, with infill. Visible externally in the north wall of the east-central bay is a is a blocked arch, with a plain semicircular head, which may represent the arch to a former north transept; its form suggests that it may be late, 17th century?, while the blocking is in thin, coursed limestone rubble from before 1838 (see Structural Development below).  The south door has a plain, 2-centred head without a surround, but deeply chamfered to the south and probably, like the chancel arch, from the 14th century. In the opposite, north wall is a similar blocked doorway but without the chamfer and interrupted by one of the windows from 1861; between it and the blocked arch is an attached, undated external chest tomb. The west wall has a pronounced, but irregular external basal batter. It is pierced by a 2-light window like the chancel east window but with a cavetto-moulded drip-mould on out-turned stops, in grey oolite from either 1861 or 1897-8, with infill. A gabled, double bellcote lies above, medieval, from the 14th century; the openings have plain, 2-centred heads. The softwood nave roof is probably from 1861, with collar-rafter trusses braced from contemporary timber wall ‘corbels’. The nave is floored as the chancel, from 1897-8, with a contemporary, below-ground heating chamber for a former ‘Porritt’s’ apparatus.

The south porch has very large quoins. The entry is through a plain, medieval segmental arch, without a surround, probably dating from c.1500. The side walls are each pierced by a single, cusped lancet, in chamfered yellow oolite from 1861. The softwood roof is probably from 1861 and lacks trusses. The tiled floor is either from 1861 or 1897-8 and laid directly on the substrate.

The lean-to vestry was added against the south wall of the chancel west bay in 1897-8, and is open to the chancel beneath wall-plate level. The southern, side wall has a central gablet and a contemporary window of 2 lights with individual 2-centred, cusped surrounds in chamfered yellow oolite. In the west wall is a fireplace, also from 1897-8, with a 4-centred head; the chimney has gone. The softwood, lean-to roof, and the woodblock floor, are also from 1897-8. Against the east end of the nave south wall is a very slight, plain, low external raking buttress which is associated with a full-height, vertical joint; it may represent the truncated west wall of a former component on the site of the present vestry, a medieval south chapel? (see Structural Development below).

A shallow, concreted external drain surrounds the church, exposing the footings of the east and west walls. A north transept, and possibly a south chapel were formerly present but are not represented by any physical evidence beyond the present church. Floors are suspended in the chancel, nave and vestry. There is a below-ground heating chamber in the nave. External memorials lie against the north walls of the chancel and nave; a further memorial lies significantly close to the vestry.

The chancel arch, squints, south door, blocked north door, and rebuilt chancel windows are all of a style consistent with a 14th century date; the western bellcote may be original and contemporary. The south porch has very large quoins and is secondary; the segmental doorway suggests a date of around 1500. The sanctus bellcote is 19th century but may occupy the site of an earlier structure – it is known locally as the ‘priest’s bell’ (RCAHM, 1925, 385). The presence of a former north transept is suggested by a blocked arch in the nave; the opening is unusual in being both set back 1 bay from the chancel arch, and in having a full-centred semicircular head in possible neo-Classical tradition, suggesting a late, perhaps 17th century date.

The vestry is a 19th century addition but may occupy the site of an earlier north chapel (see above). The earliest reliable map evidence examined is the tithe map of 1838 (NLW, Spittal, 1838), on which only the chancel, nave and south porch are shown, indicating that any south chapel  –  and north transept – had already been removed.

The church was restored in 1861 (RCAHM, 1925, 385) but neither the details, nor the architect responsible, are known. However, it appears from comparison with the specifications for the second restoration (see below) that the church was refenestrated and probably reroofed. The rebuilding of the sanctus bellcote appears also to have formed part of this work.

A second restoration was undertaken in 1897-8 (RCAHM, 1925, 385), to the designs of the architects Messrs. Pinder & Fogarty (NLW, SD/F/618). The specifications list the proposed work as ‘general repairs, new seating, new floor, new vestry, panelling round nave walls, heating apparatus and chamber etc.’ (Ibid.). It was intended that the chancel arch be altered, and that the nave and chancel roofs be matchboarded,  but these works appear not to have been carried out.

The fine, neo-Gothic oak stalls, with bookboards and reader’s desks, the similar pews, and the pulpit, are from 1897-8 (NLW, SD/F/618). The neo-Gothic carved oak altar table is probably contemporary with the similar panelled reredos, with a central alabaster frieze of the Last Supper, which is dated 1919. The softwood altar rail is probably late 19th century, but was installed in 1986.

The font has a square, scalloped bowl, a cylindrical stem and a square base, from a single block of limestone dateable to c.1200.

There are 2 bells in the bellcote.

‘A small enclosure’ adjacent to the church (presumably to the south-west), ‘with a few indications of other walls’ which were demolished c.1870, was thought to represent the site of a medieval hospice from which the church and settlement derived their name (Anon., 1883, 339).

St Mary, Spittal, was a parish church during the post-conquest period, of the medieval Deanery of Rhos (Rees, 1932).

The church has been said to have been granted to the Knights Hospitaller of Slebech in the 12th century (Anon., 1883, 339) but there is no confirmation of this supposition within the primary sources (see also Structural Development above).

The tithes of the prebend and parsonage were, in 1567, leased by the precentor Thomas Huett, to Nicholas Goddard of Rudbaxton, Pembs., for 40 years at £13 6s 8d per annum, the lessee to provide a curate for the church (ibid.). In 1668 the rectory was granted to James Haward of Rudbaxton for his life and those of his children, at the same annual rent and a fine of £50, the tenant to find meat for the precentor, and a horse when he came to preach at Spittal (ibid.).

The advowson was in private hands in 1786, but patronage was still vested in the precentor (ibid.). By 1833 the living was a perpetual curacy, in the patronage of John Lort Philipps Esq. and William Edwards Tucker Esq., the former of which had 2 turns and the latter one turn (Lewis, 1833); it was endowed with £800 royal bounty and £200 parliamentary grant. By 1896 presentations were being made by the Bishop (Green, 1914, 204).

In 1998 St Mary, Spittal, was a parish church. The living was a vicarage, held with St Dogwells, Trefgarn and Ambleston (Benefice 819) in the Archdeaconry of St Davids, Rural Deanery of Daugleddau (St Davids, 1997-8).