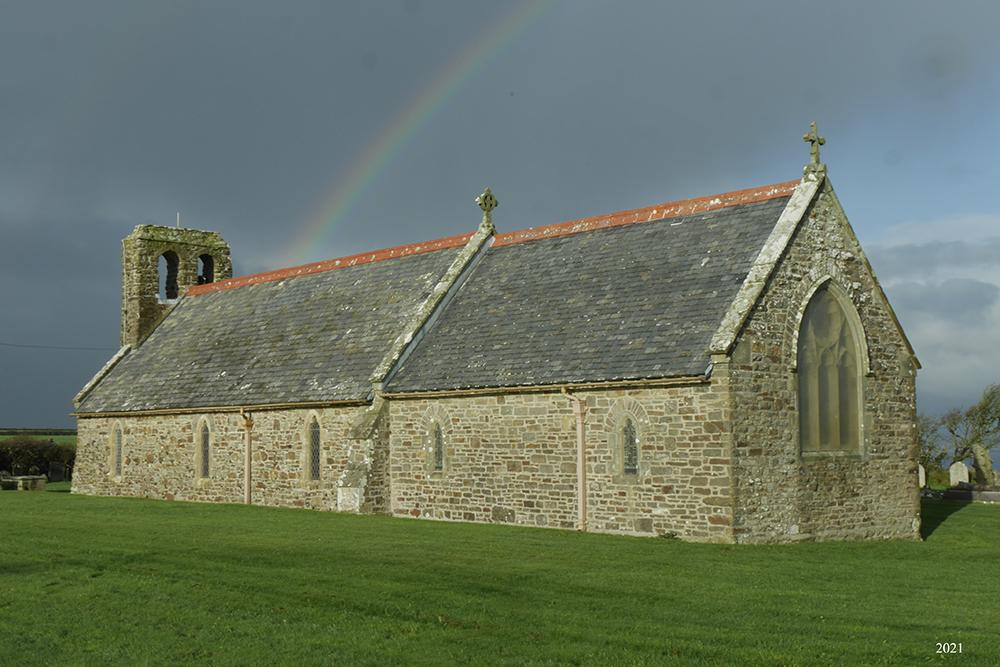 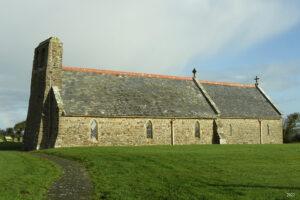 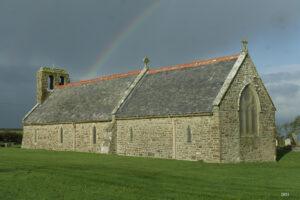 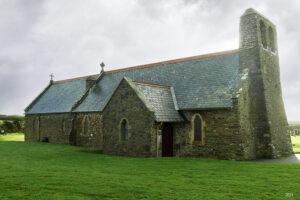 The present church consists of a long 2-bayed chancel and a 4-bayed nave that is slightly wider but not much longer; for its width, the church is remarkable for its length. A south chapel may formerly have been present. Construction is in small-medium sized mixed rubble, predominantly limestone rubble, the medieval work unsquared and uncoursed and without quoins. Good 1869 pointing and 1893 ribbon pointing. The internal walls are rendered/plastered. Roofs are slated gables, the nave probably always roofed at a higher level than the chancel. The church is entered through a north door.

A medium depth, earth-cut external cutting runs along the north walls, mainly primary but exposing footings at the west end; it is concrete-lined. The south and east walls have a shallow concrete external drain. An internal offset in the nave may represent floor level, and suggests that the nave floor has been lowered. An underfloor void may have been present. No internal crypt/vault is evident. A south chapel may have formerly been present, south of the chancel west bay.

The basic plan of chancel and nave follows the medieval arrangements but documentary sources suggest that a south chapel may formerly have been present, and was removed between 1839 and 1856 (see below). The chancel, apart from its west wall, was almost entirely rebuilt in 1893 removing most of its medieval walling (and any structural evidence for a former south chapel). The internal stone benching around the west bay was retained, however, and extended around the west wall (NLW, SD/F/643); two medieval corbels higher in the side walls may be re-used.

The nave and the chancel may originally have been of a similar 13th-14th century date, but it is impossible to date the nave more closely in the absence of medieval detail. The chancel arch has survived restoration, however, and is a plain, eccentric 2-centred arch with internal offset imposts, and a cut-out in the southern limb associated with the rood-loft. A plain triangular-headed doorway to the north led onto the former rood-loft.

An ‘ancient tombstone’ was found in the chancel floor in 1893, and ‘other ancient worked stones’ were found buried in the north wall (Davies, n.d., 12). Dyfed SMR records that there are in existence medieval tiles that came from the church, including 3 late 15th century Malvernian heraldic tiles, wall tiles resembling some from Whitland Abbey, ‘brilliantly-coloured’ tiles of foreign manufacture, and one native tile from 1275-1375 with a carving of a 4-leafed clover.

The nave retains few original features, It was entered through both north and south doors, but the south door was blocked in 1869 and no structural evidence can now be seen. The north door has a rounded 2-centred arch, but no surround, and can only be given a broad 13th-14th century date. The west wall has a pronounced external basal batter, and a massive, central raking buttress continuing as a bellcote; the latter has a squared top and 2 openings with plain segmental heads, of 16th century appearance; there is one pre-Reformation bell (see below). Within the buttress at a lower level are 2 square sockets which may be associated with the former bellropes; a splayed, segmental-headed internal recess represents a blocked medieval window. All windows are later, but possibly occupying earlier sites. A weathered stoup bowl lies loose in the nave.

The tithe map of 1839 (NLW, Talbenny, 1839) is unusually faithful in its representation of buildings, and appears to show the church as at present, but with a large transeptal structure south of the chancel west bay – a south chapel?. When the (pre-restoration) church was described in 1856 (Glynne, 1885, 209) the plan, as at present, comprised just nave and chancel, but an indication of capitals in the south (and north) wall of the chancel suggested that there ‘had been an aisle or chapel’, of which all structural evidence has been lost (see above). Two medieval windows survived in the chancel north wall, a trefoil-headed lancet and a square-headed slit light. The nave north door was noted, as ‘obtuse’; the opposite south door was still open and had a ‘rudely pointed’ head. The windows were ‘mostly modern’, presumably the typical sashes of the later 18th-early 19th centuries, ‘and closed by shutters’. The rood-loft door and western bellcote were as at present. The exterior walls, and the roof, were whitewashed; the church was apparently ‘neglected’. The seats were ‘old square pews’ (Davies, n.d., 14).

The church was restored in 1869 (Davies, n.d., 14) apparently at a cost of £77, but the architect is unknown. The restoration only affected the nave but was medium-high impact. The south wall was rebuilt almost from footings level, in squared and coursed limestone rubble. The 6 present oolite lancets were inserted in the nave, and the ‘entrance was removed to the north side’, the site of the former south door being lost in the rebuild of the south wall. The nave side walls were heightened or rebuilt, with internal corbels for roof-trusses. Two coped buttresses were built against the side walls for the chancel arch. The nave east wall carries a flue and a square chimney on the northern upstand slope, of limestone ashlar; the flue led from a free-standing stove (NLW, SD/F/643). The nave was reroofed with softwood collar-rafter trusses, arch braced from the wall corbels, with weather tabling. The nave was refloored, and the floor may have been lowered, but the 1869 surfaces have possibly been replaced (see below). The softwood seating has been replaced, as has the pulpit. The simple softwood vestry screen fitted in the south-west corner of the nave is still present.

The chancel was almost entirely rebuilt in 1893 (NLW, SD/F/643) at a cost of £371 and to the specification of the architect D. Edward Thomas, of Haverfordwest. The east, north and south walls were truncated, retaining the side wall benching which was extended, and rebuilt in squared and coursed limestone rubble. The interior was plastered. All detail was based on the 1869 work in the nave; the side walls were given 2 lancets each, and the east wall a 3-light window, with a central octofoil, in a 2-centred oolite surround and drip-mould. The side wall interiors were corbelled for the roof trusses. The roof follows that in the nave, and the floor is polychrome tiled. The present altar rail was fitted, and possibly the altar table.

There has been some further work. The nave appears to have possibly been refloored; the softwood pews are all free-standing, and from the later 20th century, while the pulpit is dated 1959. Some external repointing has taken place in the 20th century.

The limestone font bowl, square and scalloped, is 12th-early 13th century; the cylindrical stem and square base were (re)built in the 19th-20th centuries.

The bell is of pre-Reformation date, weighs 2 cwts and carries the inscription ‘SANCTE MARTEINE ORA PRO NOBIS’ (RCAHM, 1925, 394; the inscription reads ‘SANCTA MARIA REGINA COELI ORA PRO NOBIS’ according to Phillips, 1925). The ‘St Martin’ of the RCAHM transcription led them to interpret the bell as that which was removed from the friars’ church of St Martin, Haverfordwest, at the dissolution, as recorded by the Court of Augmentations (RCAHM, 1925, 394). The bell was rehung in 1939 (Pembs. R. O., HPR/52/12) and again in 1984 (Davies, n.d., 10).

St Mary, Talbenny, was a parish church in the post-conquest period (Rees, 1932), of the medieval Deanery of Rhos. The patronage of the rectory appears always to have been appendant to the Manor of Talbenny, in the Lordship of Rhos (or Haverford), and held by the de la Rupe family in the early 14th century (Green, 1914, 213-4; Hunter and Traherne, 1852, 265). From them it passed to the Devereux earls and then to the Owens of Orielton (Green, 1914, 213-4).

In 1998 St Mary, Talbenny, was a parish church. The living was a rectory held with Walton West and Haroldston West (Benefice 578) in the Archdeaconry of St Davids, Rural Deanery of Roose (St Davids, 1997-8).

Cadw, 1997, Buildings of Special Architectural or Historic Interest (The Havens).