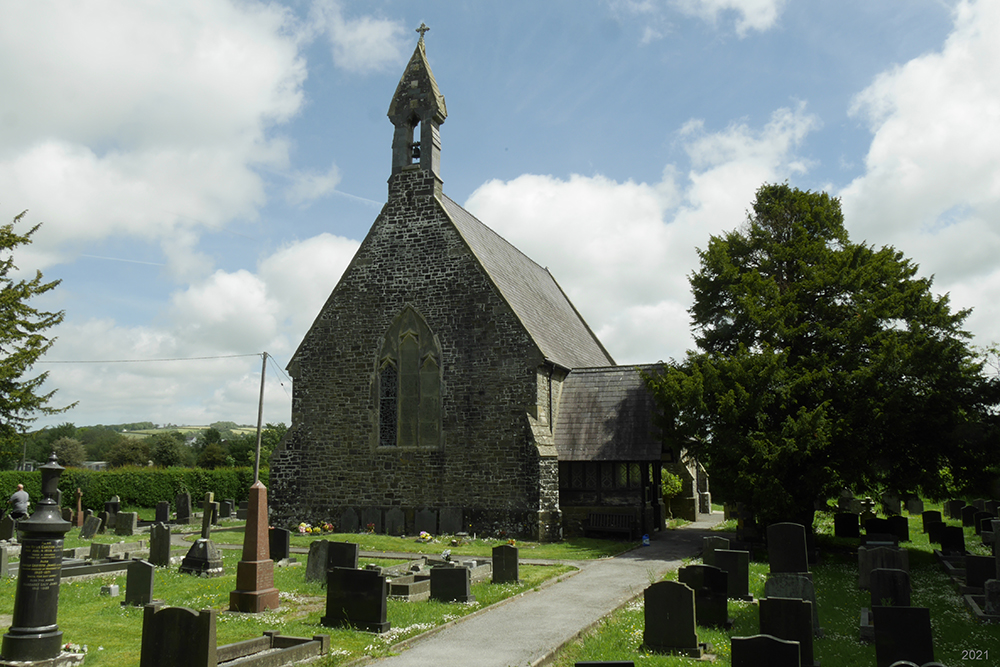 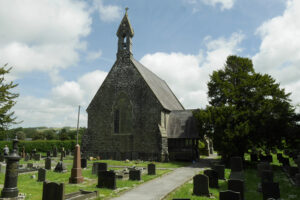 Archaeological potential – good-very good. Regular earthwork platform against 20% of church, from earlier church?; no external cutting or drain; suspended floors over void in 50% of church.

St Mary, Whitland, is a multicelled church, of medium size. It was entirely (re)built in 1851 on the same site, and in the same location as its predecessor, but nothing was retained from any earlier fabric.

The present church consists of a 2-bayed chancel, a 3-bayed nave, a single-bayed south aisle south of the nave east bay, a south porch and a 2-bayed vestry north of the chancel. A below-ground coal-cellar lies north of the nave east bay. Construction is in roughly squared and coursed local rubble, with pointing mainly from 1851; the interior is plastered. The main openings are from 1851 and neo-Decorated, including windows, mainly 2-light, with curvilinear tracery in yellow oolite. The exterior is buttressed throughout, with angle buttresses at the chancel and nave end walls. A low, chamfered oolite offset runs around all external walls. There is a tall, gabled single bellcote at the west end, in limestone ashlar, with a cusped, ogival opening. The south porch is half-timbered, from 1851. The roofs are slated gables; the south aisle has a slated lean-to roof. The floors are suspended.

It may have been rebuilt, and reduced in size, at some period prior to 1710; ‘in the evidence (of Archdeacon Tennison in 1710) there is testimony that the chapel was much shorter than the building which preceded it’  (Lewis, 1975, 145). It is depicted in the tithe map of 1839 as a rectangular (single-celled?) building with a north transept or vestry (NLW, Llanboidy, 1839). A presentment of 1790 mentioned Whitland thus, ‘we do not know in what repair and order things are there’ (Evans, 1922, 54).

The east-west gabled vestry was added in 1921 (NLW, SD/F/677). It is unbuttressed, entered from the churchyard through a doorway in its west wall and lit by cusped, single- and double lancets. The chimney rising from the nave east gable, of oolite ashlar and with a cabled cowl and trefoil smoke-hole, may be contemporary. The coal cellar, with low walls pierced by simple square hatches and a flagged roof, may also be contemporary.

A regular, right-angled earthwork platform lies between the south aisle and the chancel; physical evidence from the pre-c.1710 church?. There is no external cutting or drain. Floors are suspended over a void in the nave, aisle and vestry. No external memorials lie significantly close to church.

There is no firm evidence for the pre-conquest religious use of this particular site, although a church probably existed within the environs of present day Whitland.

Rees, 1932, has Whitland as the site of a medieval church; however Yates argues that the present site was a post-medieval foundation ‘perpetuating the dedication of the former Cistercian abbey’ which lay some miles distant (Yates, 1972, 52). Either way, by at least 1684 (Evans, 1915, 94) the present church of St Mary, Whitland, as ‘Eglwys Fair (G)lan-taf’, was a chapelry to the hamlet of Ruggin in Llanboidy parish (Lewis, 1833).

In 1833 the living was a perpetual curacy endowed with £800 royal bounty and £400 parliamentary grant, in the patronage of Frederick Bludworth Esq., the impropriator of the major share of the hamlet’s tithes, the remainder belonging to the incumbent (Lewis, 1833). Whitland was later raised to parochial status.

In 1998 St Mary, Whitland (Eglwys Fair Glyn-taf), was a parish church. The living was a vicarage, held with Cyffig, Henllan Amgoed and Llangan (Benefice no. 826) in the Archdeaconry of Carmarthen, Rural Deanery of St Clears (St Davids, 1997-8).