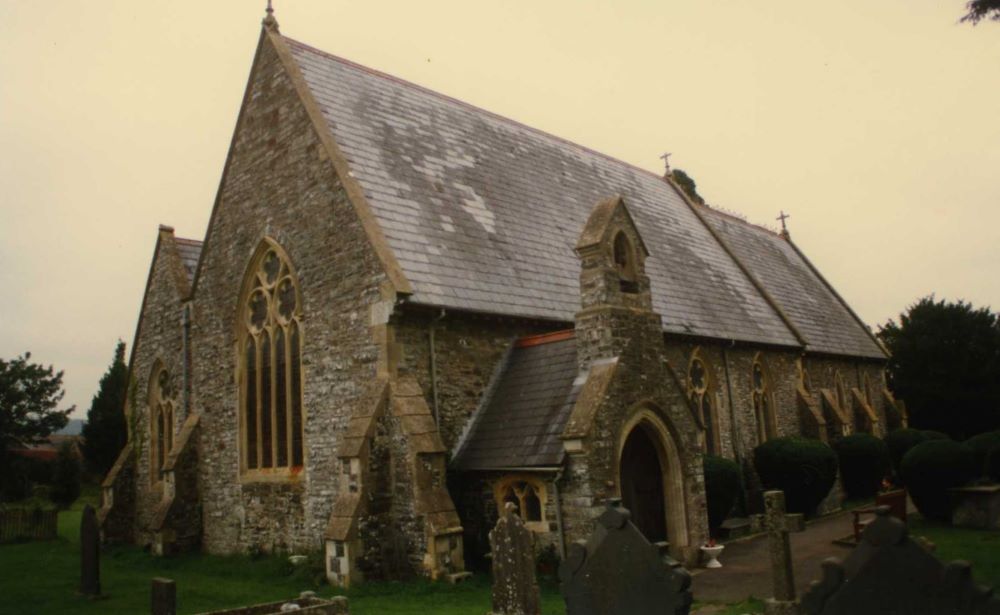 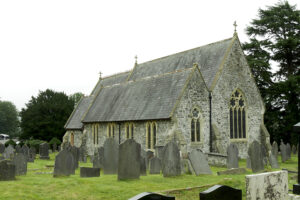 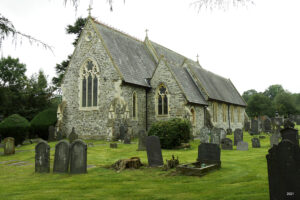 Archaeological potential – good. no external cutting or drain; floors suspended over a void in 90% of church; external memorials significantly close to 30% of church.

St Michael, Llanfihangel Ystrad, is a multicelled church, of large size. It was entirely (re)built in 1877 on the same site, and in the same location as its predecessor, but nothing was retained from the earlier fabric  (Dyfed PRN 4777).

The present church consists of a 3-bayed chancel, a 4-bayed nave, a single-bayed vestry north of the chancel centre bay, a single-bayed store-room north of the chancel west bay, 4 4-bayed north aisle, and a south porch. Construction is in local rubble throughout; external pointing is mainly from 1877, and the interior is plastered. Openings are mainly from 1877 and neogothic, with yellow oolite dressings, the windows comprising simple double lancets and multi-light windows with Geometric tracery. The exterior is buttressed throughout, from 1877. The south porch is from 1928 and its southern gable carries a gabled single bellcote offset from a square base. The roofs are slated gables throughout, the vestry and store-room being roofed as one.

No south aisle, nor the screen, are mentioned in a description of 1847 (Glynne, 1898, 353). The north aisle arcade is described as ‘very rude’, there was no defined chancel and no porch, and an ‘open’ bellcote lay at the west end. The whole was ‘glaring with whitewash’.

The church was entirely rebuilt in 1877-8, to the designs of the architect John Middleton of Cheltenham; ther is no evidence that any medieval masonry was retained, as suggested in Cadw, 1996, 1.

There is a neither an external cutting nor a drain. Floors are suspended except in the porch. External memorials lie significantly close to the south wall.

St Michael, Llanfihangel Ystrad, was not a parish church during the post-conquest period (Rees, 1932), but a chapelry of the medieval Deanery of Sub-Aeron. It was a possession of St Davids as a prebend of the collegiate church at Llanddewi Brefi, rated in the king’s books at £7 14 4½d (Lewis, 1833).

Llanfihangel Ystrad had become a parish by 1833 when the living, a discharged vicarage in the patronage of the Bishop as an impropriation, was rated in the king’s books at £4 18s 1½d and endowed with £400 parliamentary grant (ibid.).

In 1998 St Michael, Llanfihangel Ystrad, was a parish church. The living was a vicarage, held with Cilcennin, Trefilan and Nantcwnlle (Benefice no. 698) in the Archdeaconry of Cardigan, Rural Deanery of Glyn Aeron (St Davids, 1997-8).