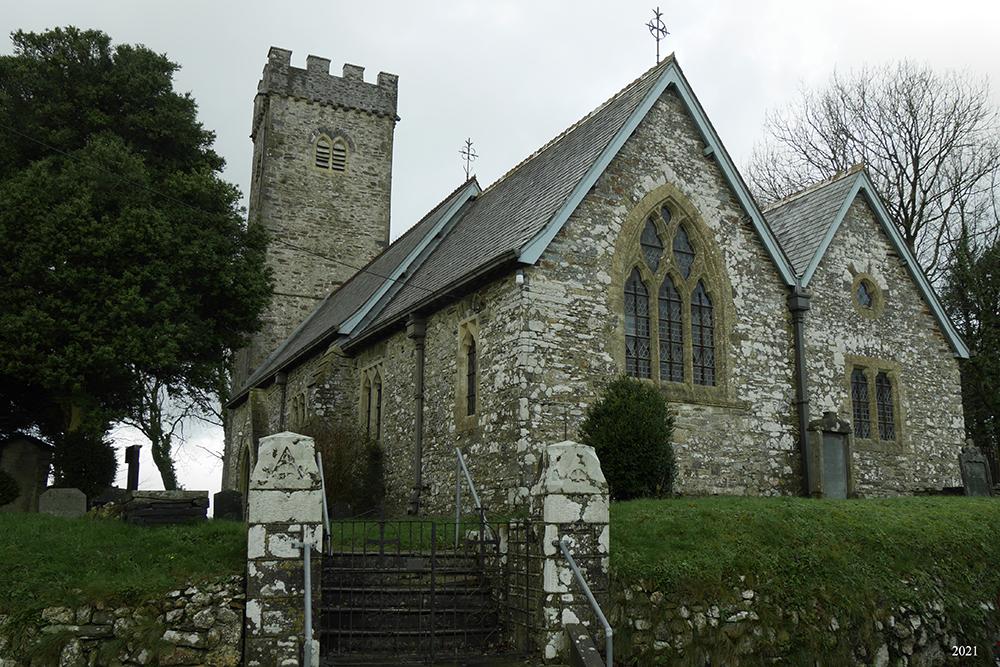 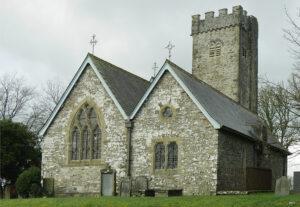 The present church consists of a 3-bayed chancel, a 3-bayed nave, a 3-bayed north chapel, a 2-bayed north aisle and a 3-storey west tower. Construction is in mixed limestone, shale, slate and Old Red Sandstone rubble throughout, unsquared and uncoursed, with medieval limestone quoining in the west tower only. Good pointing, 1884-5, with remains of 18th century render in limited areas. The internal walls are rendered/plastered; pre-1884 plaster in west tower. The nave and north aisle are now of roughly equal height; the chancel and north chapel are lower. Roofs are slated gables.

Medieval openings are restricted to the tower, and there largely rebuilt (see below). The remainder of the detail is all from 1884-5; the windows are neo-gothic and 1-, 2- and 3-light, with oolite surrounds, the larger with curvilinear tracery, and some with Caernarfon heads. The chancel arch is plain and 2-centred while a similar arch leads from the chancel west bay into the north chapel; a 2 bay arcade of similar arches on a clustered-shaft pier with a plain capital and base lies between the nave and the north aisle. Doors are 2-centred, and with oolite surrounds. The south door has a gabled ‘porchlet’ with oolite dressings including a string-course. There is a further door between the chancel central bay and north aisle. The north and south walls display stepped buttresses, the northern with a plain chimney. There is no dressed tabling.

A large, fine, oolite Jacobean monument (Scourfield family) however occupies a semicircular-headed recess in the south wall of the chancel central bay, dated 1621.

The 3-storeyed west tower has retained most of its medieval fabric; the openings, however, were largely rebuilt in 1884-5. It is slightly tapered and the basal batter and string course characteristic of the district, all medieval; the exterior is pierced by a number of contemporary sockets – putlog holes? The square spiral stair turret projects from the east end of the north wall. A plain 2-centred arch divides the ground floor from the nave, with the plain spiral stair door and slit lights it is late 15th century; the barrel-vault is contemporary. The west door and window occupy medieval openings but were rebuilt 1884-5. The floor comprises a series of steps down to the west lying on the substrate. The second stage is blind but exhibits an external string course, late 15th century. The 2-light belfry openings, with 2-centred oolite heads, are 1884-5. The belfry roof was not seen. There is a crenellated parapet on a plain corbel table, also late 15th century but the merlons have been partly rebuilt. Externally, the tower displays extensive remains of render, probably 18th century; internally, the ground floor walls lie beneath pre-19th century plaster. The tower is in poor-fair condition, with external plant growth and poor finishes.

The core of the nave is medieval but has been almost entirely rebuilt in 1884-5 and cannot be closely dated; an elevation drawing accompanied the Faculty application of 1884 and shows the south wall as pierced by 2 windows, of 2 cusped lights within square surrounds, of general 16th century form (NLW, SD/F/519). The plain, 2 centred door occupied the same location as the present south door and may too have been medieval. The north aisle was entirely rebuilt in 1884-5 but replaced a medieval aisle, of the same dimensions; the Faculty plan shows window splays in the aisle west half that may be medieval (NLW, SD/F/519), while in 1883 the north wall was described as retaining ‘one of the small loop windows’ (Anon, 1883, 340) and a niche ‘for an image’ was observed between two of the arches. A further window had been blocked (NLW, SD/F/519). It appears then that the medieval church comprised tower, nave and north aisle, and was extended eastward in 1725.

The chancel and north chapel, in their present form, are almost entirely 1884-5 (ibid.) but they replaced components apparently built in 1725, as suggested by the datestone formerly over the south door (ibid.; Anon, 1883, 340); the earliest pictorial source is the tithe map of 1839 (NLW, New Moat, tithe map, 1839) by which time they were already present. The implication is then that the Jacobean monument was removed from its original location. Whilst this may appear unlikely, the traditional name for the chancel is the Scourfield Chapel (Anon, 1883, 340) and it is probable that the construction of the chancel was funded by that family – the patrons of the benefice – as their mausoleum.

The north aisle and chapel were, in 1725, continuous. Both chancel and aisle exhibit a low, plain external offset; it is not known whether this represents the 1725 fabric or is part of the 1884-5 rebuild. The east half of the aisle (the present north chapel) lies over a crypt or vault, with a memorial dated 1722. Until 1884 this was reached by an internal stair (NLW, SD/F/519). The Faculty elevation shows single light ‘Georgian’ sash windows in the chancel south wall; similar windows occupied the aisle while the east window was 3-light with stone mullions (ibid.), possibly 16th century as in the nave. A baptistery, semicircular in plan with a lean-to roof and an entry in its north wall, lay in the angle between the nave north wall and the aisle west wall in 1884 (ibid.); it was probably also of 1725, but removed in 1884-5. The floors were boarded, with flagged passages (ibid.). Prior to 1884 there was a west gallery in the nave, which also featured box pews, and open seats in the aisle (ibid.).

The north chapel lies over a below-ground crypt/vault, of 1725, with a wide, revetted external stairwell; it also housed a former heating apparatus, 1884-5. There are further vaults beneath the east end of the chancel. A shallow earth-cut cutting runs north aisle north wall, and a shallow slabbed drain along the nave south wall, both of 1884-5. Floor levels appear to have been raised in chancel, nave, chapel and aisle; the chancel floor obscures the base of the 17th century monument. There are suspended floors in the nave, north chapel and north aisle; the tower floor lies directly on the substrate.

The pre-restoration church is described in a number of sources. It was called ‘handsome’ c.1811 (Fenton, 1903, 195) and as a ‘venerable structure’ in 1833 (Lewis, 1833) the chancel of which ‘appears to have been very richly embellished at no very distant period, but of late has been very much neglected’. The 17th century monument in the chancel was noted. Some work had evidently been performed by 1883 when the chancel was ’embellished with a good deal of stucco and colour’ (Anon., 1883, 340).

The church was restored in 1884-5 (NLW, SD/F/519), following specifications by the architect A. Ritchie, of Chester. The north aisle was demolished ‘to the level directed’ and rebuilt, as was the nave north wall and arcade between the two; much of the nave and chancel walling was also rebuilt and refaced. A new chancel arch was built, and a similar arch divide the north aisle into aisle and chapel. The chancel north wall arch and door were inserted, and the tower and nave doors were rebuilt, the latter with the ‘porchlet’. Buttresses were added to the north and south walls, and a heating chamber inserted in the north chapel vault. The decorative plasterwork noted in 1883 was stripped and the walls replastered. The floors were raised and the chancel and passages tiled, the flooring under the new seating being boards laid on concrete. Heating flues were installed beneath the passages. A suspended boarded floor lies over the chapel vault. The church was entirely refenestrated, including the tower. Entirely new oak and softwood roofs were put on, with king- and queen-post arch-braced trusses in the chancel and nave, and scissors-braced common rafters in the aisle and chapel. New fittings included the present pulpit, stalls and seating, and the bellframe was renewed. The font was moved to its present position. The contemporary stove in the north aisle is still present.

There has been little further work on the church, except the introduction of softwood screens between the chancel and chapel, and between the nave and the tower, both of which are mid 120th century. The composite stone credence shelf is also 20th century. The iron railings between nave and chancel, which were to have been retained from the pre-restoration church according to the Faculty, are not present, and were possibly removed in 1884.

The slate font is medieval, with a square scalloped bowl, cylindrical stem, and square base, all 12th-13th century but redressed in 1884-5.

St Nicholas, New Moat, appears to be a de novo church of the post-conquest period. There is no evidence for any pre-conquest religious use of the site, while the ‘Nicholas’ dedication is usually regarded as a feature of the Angle-Norman frontier. It was not a parish church, but a chapelry in the medieval Deanery of Rhos (Rees, 1932) erected presumably to encourage settlement within the developing borough of New Moat (Soulsby, 1983, 198). It was granted to Pill Priory c.1200 (ibid.), the priors of Pill being the rectors.

In 1291, as ‘Ecclesia de Nova Mota’, it was assessed at £4 13s 4d for tenths to the king (Green, 1913, 220), a relatively small sum, the amount payable being 9s 4d. The clear yearly value was 44s 7d in the ‘Valor’ of 1536, tenths to the king, 4s 5½d (ibid.). At the dissolution the benefice came into the hands of the crown. The patronage was later acquired by the Scourfield family (ibid.) while the crown retained the rectorship until some period prior to 1795, when the vicarage of New Moat was merged in the rectory (Green, 1913, 221). The church became the parish church of New Moat.

In 1998 St Nicholas, New Moat, was a parish church. The living was a rectory, held with Maenclochog, Llandeilo Llwydarth, Mynachlogddu, Llangolman, Henry’s Moat and Llys-y-fran (Benefice 831) in the Archdeaconry of St Davids, Rural Deanery of Daugleddau (St Davids, 1997-8).