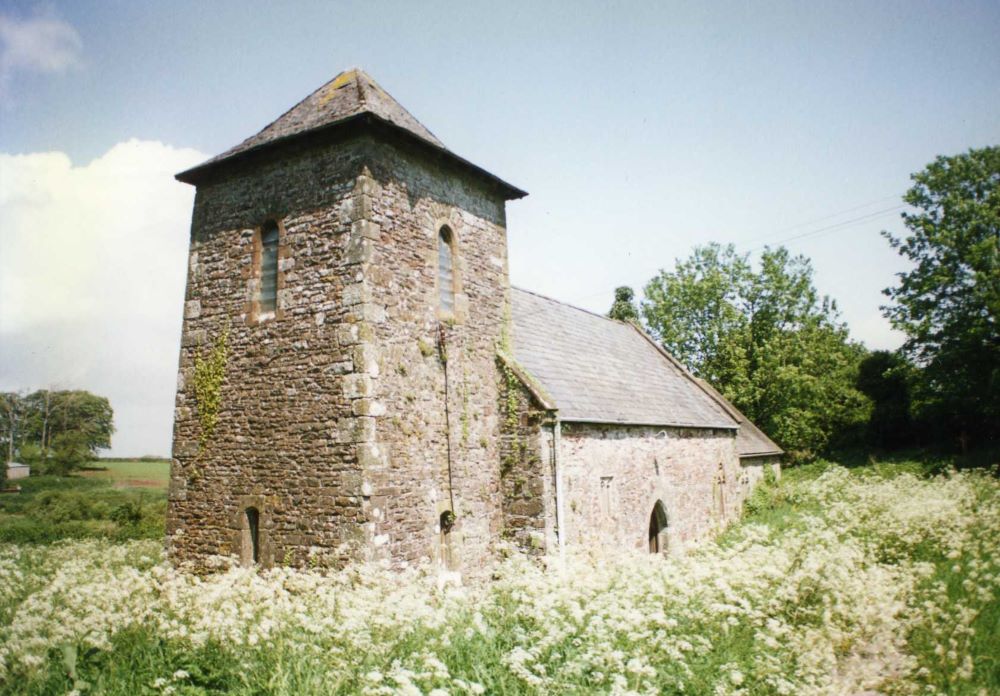 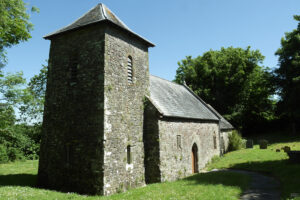 Reasons for Listing. No recorded detail given.

Since 24th July 2006 this site owned by The Friends of Friendless Churches on a 999 year lease.

The present church consists of a 2-bayed chancel, a 3-bayed nave and a 2-storeyed west tower. Construction is in limestone and Old Red Sandstone rubble. Openings are medieval (post-medieval in the tower?) with purple sandstone, limestone and yellow oolite dressings; some have been rebuilt but as faithful replicas. Pointing appears to be largely pre-19th century; the interior is plastered. Roofs are slated gables, the tower has an overhanging pyramidal slated roof.

The 2-light chancel east window is from c.1500. The rear arch has a double roll-moulded surround, the lights have 2-centred, cusped heads and Perpendicular tracery of cinquefoils and quatrefoils, in a dripmould on out-turned stops, all in weathered purple sandstone. The similar south wall window has been largely rebuilt in yellow oolite, with poor infill around the head, from the late 19th – 20th century. That in the north wall is also in purple sandstone, 2-centred and of 2 lights, and also from c.1500 but without tracery.  Internally, the south wall exhibits a plain piscina with a semicircular-headed recess and bowl that may be 13th century; the tomb-recess to the west, with a chamfered 2-centred profile and hood-mould on large, plain stops may be rather later, 14th century?. It is now empty but a late 14th century female effigy lies against the north wall, on a late 19th – early 20th century plinth, having been recovered from the churchyard in the 19th century; the effigy reputedly represents Margaret Marlos, niece of Sir Guy de Brian, Lord of Laugharne. The low, plain semicircular chancel arch is regarded as early 13th century; to the north a ?contemporary rood-loft doorway, with a plain semi-2-centred head, lies high up in the wall, its sill comprising 3 steps. Two corbels either side of the arch, on the west face, relate to the former rood-loft; the apparent impression of steps within the plaster finish of this wall, leading up from the southern corbel, appears to be spurious. The softwood chancel roof is from the later 19th century and has simple collared trusses, matchboarded above. The polychrome tiled sanctuary floor is also later 19th century; the west bay passage comprises 18th – early 19th century memorial slabs; the flags either side may be contemporary.

The nave side walls are battered externally to full height, more pronounced in the north wall the east end of which is pierced by a window from c.1400; it lacks a drip-mould comprising 2 lights with ogival heads and simple curvilinear cusped tracery, in purple sandstone with some limestone in the mullion. There are 2 windows in the south wall; that to the east is like the north wall window but was entirely (re)built in purple sandstone in the late 19th – 20th century. To the west is a cusped, 2-light window, with sunk spandrels in a square surround with an internal roll-moulding, in oolite and purple sandstone from the 16th century; the plunging embrasure is probably earlier. Between the 2 windows, the south door has a 2-centred surround in chamfered limestone, from c.1300 but largely restored/recut. The nave roof is from the later 19th century and has collared trusses, arch-braced from wall-plates and matchboarded above the purlins. The floor is flagged as the chancel, 18th – early 19th century?.

The west tower may be post-medieval. It is unusual within the region, its closest affinities being with that at Llanfihangel-uwch-Gwili, Carms.. It comprises just 2 storeys but lacks the west door, battered base and string-course ‘typical’ of the region, and is instead battered to full height. Unlike Llanfihangel-uwch-Gwili it features a square spiral stair turret which projects from the eastern half of the north wall which rises the full height of the tower and finished by a lean-to continuation of the pyramidal tower roof; it is entered through a simple, square-headed doorway, ?post-medieval, and lit by contemporary slit-lights. The ground floor communicates with the nave through a doorway with a ?post-medieval semicircular rear-arch and a segmental brick surround from the later 19th – 20th century; there is a similar opening into the belfry above. The west and south walls each feature a simple, segmental light with a very plain chamfered sandstone surround, ?post-medieval, but partly rebuilt in the later 19th – 20th century. The ground floor has a very rounded, 2-centred barrel-vault. The floor is flagged as the nave. A single lancet pierces the north, south and east faces of the belfry stage; the regular voussoirs of  the openings suggest a post-medieval date for all 3, with simple chamfered sandstone surrounds. There is now no parapet, and may never have been; instead, a slated pyramidal roof overhangs at the eaves

An external cutting surrounds the entire church except the chancel north wall, varying in depth from shallow along the nave south wall to very deep along the north wall; all primary?, footings not exposed?. There is no evidence for floor level changes. Floors are not suspended and there is no evidence of internal voids, but there are marked internal burials. External memorials lie significantly close to the chancel south wall.

The chancel arch is regarded by most authorities as early 13th century (Yates, 1974, 71 et al.); the presence of a ?contemporary piscina in the chancel suggests that chancel and nave may both be from the early 13th century. The west tower may be a ‘debased’ later addition like the similar tower at Llanfihangel-uwch-Gwili, Carms., possibly as late as the 17th century; however, one ‘little bell’ was present in 1552 (Wallcott, 1871, ii).

The church is, to a large extent, unrestored, and what restoration has taken place has been confined to the faithful replication of original openings, reroofing, and replastering the interior. Neither the date of the restoration, nor the architect responsible, are known, but it appears to have largely occurred by 1906 when the church preserved, ‘notwithstanding restoration, much of its original charm’ (Treherne, 1906, 178).

The elaborately carved arcaded oak altar table, and the reredos in the form of a scrollwork marble fillet band beneath the east window, are later 19th century; the softwood pews may be contemporary and lie on freestanding board floors. The simple softwood stalls, and the pulpit, may be early 20th century.

The limestone font has a square bowl on a circular stem and base which may all be post-medieval.

An ECM, a Latin and Ogam inscribed stone, formed the sill of the south door until it was moved into the nave during the 19th century.

St Odoceus, Llandawke, may have been a parish church during the post-conquest period, of the medieval Deanery of Stradtowy. It appears always to have been in private patronage, under the Lordship of Laugharne.

In 1998 St Odoceus, Llandawke, was a parish church, but was subject only to very limited use. The living was a rectory, held with Laugharne and Llansadwrnen (Benefice no. 525) in the Archdeaconry of Carmarthen, Rural Deanery of St Clears (St Davids, 1997-8).

(There is no supporting evidence for the local tradition that the church was founded in the 14th century as a monastic establishment.)