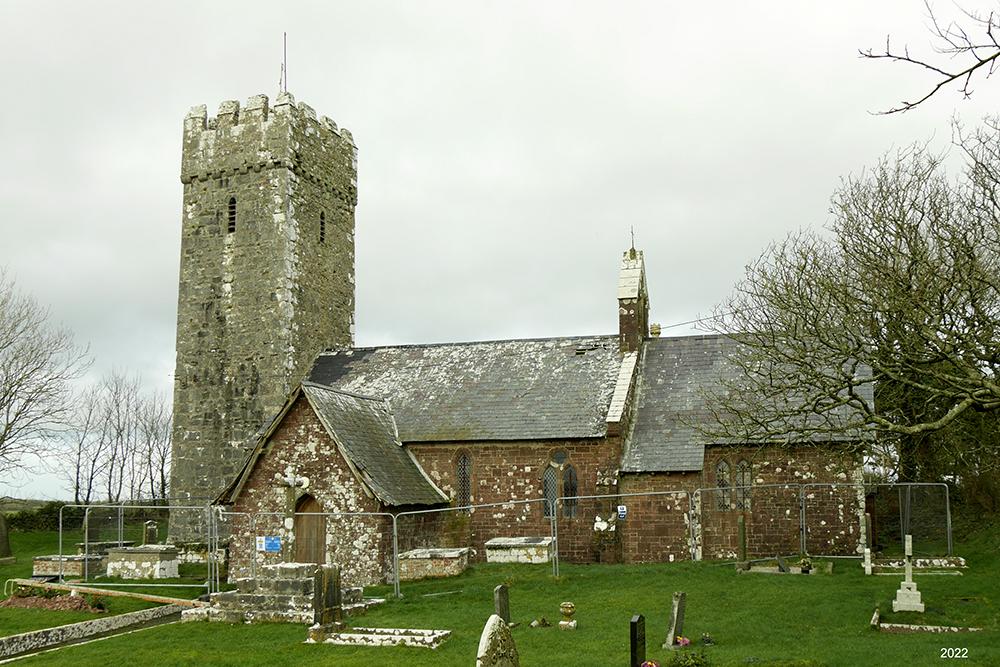 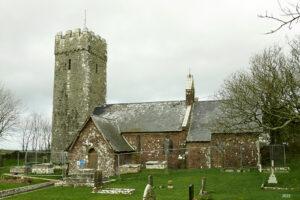 The present church consists of a 3-bayed chancel with a ‘choir-recess’, a 3-bayed nave, a single-bayed north transept, a south porch, a 3-storeyed west tower, and a single-bayed vestry north of the chancel west bay. Construction is in Old Red Sandstone rubble, much rebuilt/refaced in 1854-5 with snecked facework; the medieval west tower is in limestone rubble. Arches and openings, except in the tower, and the double sanctus bellcote were entirely (re)built in 1854-5, in neo-Gothic (late Early English) style, with Old Red Sandstone dressings. Pointing is mainly from 1854-5, and the interior is plastered. The church, except the chancel and vestry, is barrel-vaulted throughout, including the tower roof which is a masonry dome; other roofs are slated gables.

The chancel is faced with snecked rubble from 1854-5. The 3-light east window is from 1854-5 and has geometric tracery in a 2-centred surround with a drip-mould on human mask stops. The east bay north wall is pierced by a cusped single lancet from 1854-5, while the south wall has a central, uncusped double-lancet window also from 1854-5. The south wall of the west bay is projected externally as a square ‘choir recess’, a medieval feature of some Pembrokeshire churches but here entirely rebuilt in 1854-5; the internal recess has a segmental head and the outer walls are blind. The 2-centred, chamfered chancel arch is from 1854-5; the upstand above carries a double, gabled sanctus bellcote with 2-centred openings, also (re)built in 1854-5 and now empty. The softwood roof is from 1854-5 and has collar-rafter trusses cusped into trefoils, matchboarded above. The tiled floor is also from 1854-5.

The nave south wall facework is in snecked rubble, from 1854-5 like that in the chancel, with a contemporary stepped buttress at the west end; the north wall is in random medieval rubble, has a slight external batter and is now blind. The nave is lit by 2 windows in the south wall, both from 1854-5; an uncusped 2-light window in a 2-centred surround, with a plain circular light in the spandrel, lies to the east, and to the west is an uncusped  single lancet. The south door lies further west still and has a chamfered, 2-centred surround also from 1854-5. Opposite the south door is a blocked north doorway, with a plain 2-centred head in Old Red Sandstone, occupying a cut-out in the batter and probably from the 13th century; immediately to the east is an area of amorphous masonry that may represent a blocked window but is situated fairly low down in the wall. The 2-centred barrel vault is from the 13th – 14th century. The passages are tiled, with suspended board floors, from 1854-5.

The north transept is entered from the nave through a 2-centred, chamfered arch reflecting the profile of its vaulting, and is lit by an uncusped 2-light window in a 2-centred surround, with a plain circular light in the spandrel, from 1854-5, in the north wall. There is no evidence for a former skew-passage. Vaulted and floored as the nave.

The south porch is also vaulted as the nave, but was substantially rebuilt/refaced in snecked rubble in 1854-5, with a contemporary 2-centred doorway. Internally the side walls exhibit masonry benching, also rebuilt in 1854-5. Floored as the nave passages, 1854-5.

The west tower, comprising 3-storeys in roughly squared and coursed limestone rubble with distinct quoins, is not typical of the region and may be early, being similar in many respects to the 14th century tower at Loveston, Pembs.. It is slightly tapered but lacks the ‘typical’ external string-course, has only a slight external batter, and does not feature a west door. A square spiral stair turret projects slightly from the north-west corner; it is entered through a narrow doorway, with a 2-centred surround from 1854-5, and is lit by simple loops.  The 2-centred arch from the ground floor into the nave reflects the profile of the 2-centred barrel vault from the late 14th century. The west wall is pierced by a single lancet with an uncusped circular light above, beneath a 2-centred drip-mould on human mask stops, all from 1854-5 but probably occupying an earlier embrasure. The floor is like that in the nave. The second stage is lit by a simple, late 14th century square-headed light in the north wall. The belfry stage has 2-centred single-light openings, with 2-piece heads characteristic of the late 14th century work at Loveston, in the east, west and south walls, that in the west wall being 2-light; there is a simple, late 14th century square-headed light in the north wall. The tall, crenellated parapet lies on an external corbel table, from the late 14th century but restored; within the parapet is a shallow masonry dome (RCAHM, 1925, 382).

The vestry is from 1854-5 with snecked rubble facework, and adjoins the north transept with which it forms a double-gable. It is entered from the chancel through a contemporary doorway with a 2-centred surround and lit by a cusped double-lancet window in the north wall. A flue in the dividing wall with the transept leads into a square, brick chimney-stack, from later in the 19th century?. The softwood roof, and the floor, are from 1854-5.

The nave, north transept, tower and south porch are surrounded by a deep, wide drainage trench, primary?, secondarily deepened and partly revetted; a shallow, concrete-lined drain runs around the chancel and vestry. Floors are suspended above a void. External memorials lie significantly close to the south walls.

The blocked north door surround may date the vaulted nave to the 13th century. The vaulted north transept is unlikely to be contemporary; there is no evidence for a corresponding south transept and it may thus be an addition of the earlier 14th century. The unvaulted chancel may be later still; the ‘choir-recess’ is probably a faithful rebuild of a Pembrokeshire feature that is more typical of the late 14th-15th century (cf. Herbrandston, Johnston and Loveston churches, Pembs.). The south porch was largely rebuilt in 1854-5 but is vaulted and may preserve the core of a 14th-15th century original. The tower exhibits a joint to the nave and may be later 14th century, sharing its characteristic 2-piece headed openings with the late 14th century tower at Loveston, Pembs.. The vestry is a 19th century addition (see below).

The church was restored in 1854-5 to the designs of the architect R. Kyrke Penson (Anon., 1992), when the vestry was built and the south porch (re)built. The south walls of the chancel and nave were refaced and possibly at least partially rebuilt. The church was refenestrated; the chancel arch, north transept arch, ‘choir-recess’, and south door were rebuilt, and the south wall was given an external buttress. The sanctus bellcote was (re)built. It was reroofed and the interior was refloored, reseated and replastered. The work is similar in style to that at Stackpole Elidor Church, undertaken to the designs of Sir George Gilbert Scott in 1851; the two benefices were united and the imitation of his work may have been deliberate.

The altar fittings are from 1854-5 and the late 19th century and include 2 commandment tablets, probably from 1854-5. The softwood pews and pulpit are probably contemporary. The simple oak reredos is dated 1965.

The oolite font has a square, scalloped bowl, a cylindrical stem with a cable moulding and a square base, from the 19th century, 1854-5?.

St Pedrog, St Petrox, was a parish church during the post-conquest period (Rees, 1932), of the medieval Deanery of Pembroke. The rectory appears from the earliest times to have been appendant to the Manor of Stackpole Elidor (Green, 1913, 303). St Petrox was, in 1291, assessed at £10 (ibid.).

In 1998 St Pedrog, St Petrox, was a parish church. The living was a rectory, held with St Twynnells, Stackpole Elidor and Bosherston (Benefice 809) in the Archdeaconry of St Davids, Rural Deanery of Castlemartin (St Davids, 1997-8).

The rectangular churchyard appears to be imposed upon a north-south system of long, linear, co-axial field boundaries. However, the date of these boundaries has yet to be firmly established and their framework, at least, may have prehistoric origins.