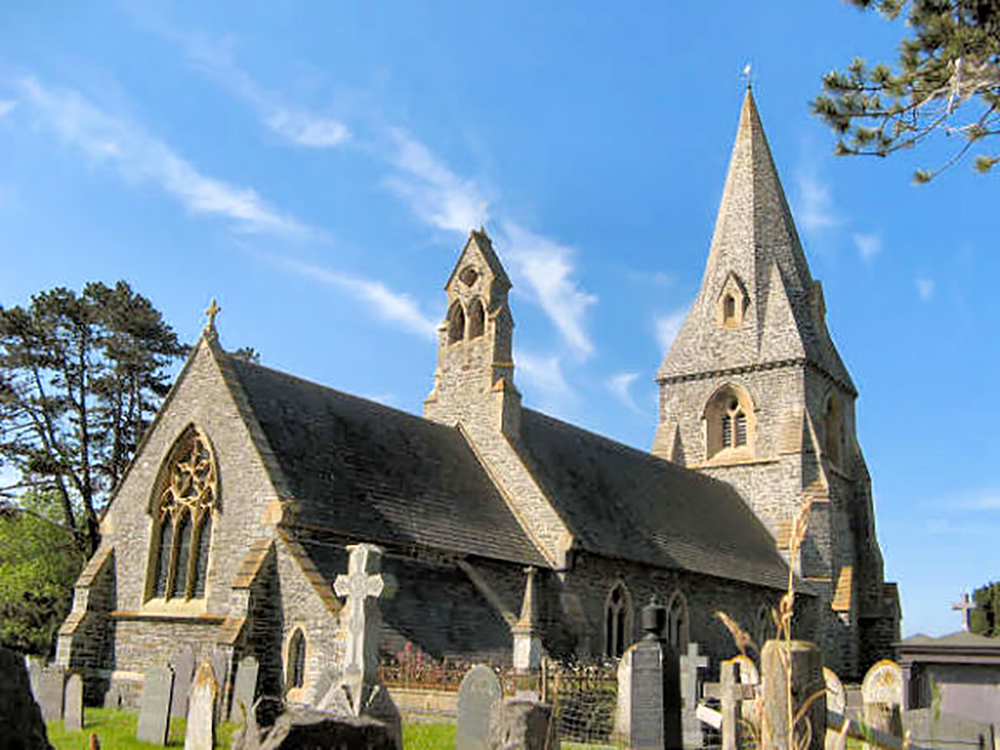 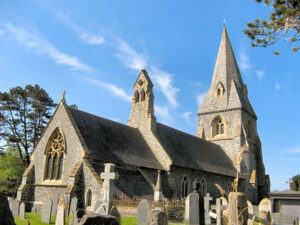 Reason for Listing: One of the most elaborate Victorian churches in Cardiganshire retaining a medieval tower, remade in C19 with the only stone spire in the county.

The present church consists of a 2-bayed chancel, a 5-bayed nave, a 5-bayed south aisle, a south porch, a single-bayed vestry north of the chancel east bay, and a 3-storeyed west tower the lower 2 storeys of which represent the only surviving medieval fabric. Construction is in local rubble, with pointing mainly from 1852-4; the interior is plastered. All openings, except some simple tower lights, are from 1852-4 and neo-gothic. They include the chancel arch and south aisle arcade, 2-centred, moulded, in yellow oolite and featuring octagonal piers in the arcade. Doors are 2-centred, with yellow oolite dressings. Windows are single-, 2- and 3-light, with Geometric tracery in yellow oolite. The exterior has stepped buttresses throughout, and a low offset, from 1852-4. There is an elaborate, gabled and shouldered double sanctus bellcote over the chancel arch. The vestry fireplace shares a flue with the heating apparatus and the octagonal chimney is from 1930. A ‘priest’s door’ lies in the chancel south wall, from 1852-4. The roofs are slated gables, the vestry has a slated lean-to roof while the tower broach spire is from 1852-4; the softwood roof timbers, tiled passages and suspended board floors are from 1852-4. The tower retains its ground floor vault from c.1500.

The west tower is from c.1500 but was much altered in 1852-4. It comprises 3 storeys, rather larger than the majority in the region (but cf. Llanwenog, Llanllwni and Llanybydder); the belfry stage was rebuilt in 1852-4 when the external corners were given stepped cross-buttresses. A square spiral stair turret projects from the eastern half of the north wall, entered through a segmental-headed doorway partly rebuilt in 1852-4 and lit by simple square slits from 1852-4. There is an external batter up to a string-course, c.1500 but rebuilt in 1852-4. The ground floor retains its 2-centred barrel vault from c.1500 but communicates with the nave through a rebuilt 2-centred arch, in moulded yellow oolite from 1852-4. The west door was blocked in 1852-4 and a 2-light neo-gothic window inserted in its place. The floor is fully carpeted; it was raised in 1852-4. The second storey is lit by a single lancet in the west wall, from c.1500. The rebuilt belfry stage lies on an external string-course and has a large, 2-centred, cusped 2-light opening in the north, south and east faces, in moulded yellow oolite from 1852-4. A similar opening in the west wall has been subsequently blocked and replaced with a simple double lancet. A large, octagonal masonry broach spire now surmounts the tower, lying on an external corbel table and featuring 4 gableted single-light lucarnes, all from 1852-4.

A shallow, earth-cut external drain runs along the north wall and west tower; a buried drain runs along the south walls. Floor levels were raised throughout in 1852-4, retaining earlier deposits?; the floors are suspended over heating ducts in the nave, south aisle and vestry. There is a below-ground heating chamber in nave. External burial vaults lie against the chancel and vestry.

The pre-restoration church is shown in 2 pictorial representations (Jones, 1973, 106-7; Freeman, 1856, 225). It comprised a 2-bayed chancel and a 3-bayed nave, on the site of the present chancel and nave, a south porch, and a west tower. Only the tower can be dated; it was a plain, square structure of 3 storeys, with a basal batter and string course, apparently belonging top the group of larger Ceredigion/North Carmarthenshire church towers represented at Llanwenog, Cer., Llanllwni and Llanybydder, Carms., which date from c.1500. In Freeman, 1856, 225 the parapet, which lay on a string-course, is shown as crenellated; in the (more reliable?) Jones, 1973, 106-7 it is uncrenellated and the summit of the tower was said by Meyrick, in 1810, to have ‘fallen down many years ago’ (Crossley and Ridgway, 1946, 54). A slated, pyramidal tower roof is shown. Simple, square single lights are shown in the second stage and belfry.

The chancel, nave and south porch were undoubtedly medieval but retained few original openings. The east window was the only chancel light and was a large, 2-centred single light opening which appears to be early 19th century; two rectangular windows in the nave north wall, and a larger, 9-pane square window in the nave south wall were probably 18th century. Either side of the nave south wall were 2 small, square ?blocked openings. The nave north wall was pierced by a segmental doorway towards its east end, not opposite the south wall and probably secondary. The 2-centred south porch door was undoubtedly medieval. The large, triple sanctus bellcote was a remarkable structure and probably always unique in South-west Wales (Freeman, 1856, 235n.). It was tall, square, with a coped north-south gable pierced by two 2-centred openings, surmounted by a gablet containing the third.

In 1810 the church retained ‘some remains of an ornamented (rood) screen (ibid.).

One source (Anon., 1897, 165) claims that the church was rebuilt in 1843 but this is evidently not the case. Possibly a refurbishment is referred to.

The church, with the exception of the tower, was demolished, rebuilt and extended in 1852-4 to the designs of the architect R. Kyrke Penson (Jones, 1973, 99-116) and there have been no major later alterations. The heating chamber was inserted into the nave floor in 1930 (NLW, SD/F/415).

St Restitutis, Llanrhystud, was a parish church during the post-conquest period (Rees, 1932), of the medieval Deanery of Ultra-Aeron. It was granted to the Knights Hospitaller of Slebech by Rhys ap Gruffydd in c.1176 (Rees, 1897, 204) but was transferred to the Bishop of St Davids by King Edward I in the later 13th century.

In 1998 St Restitutis, Llanrhystud, was a parish church. The living was a vicarage, held with Llansantffraed and Llanbadarn Trefeglwys (Benefice no. 688) in the Archdeaconry of Cardigan, Rural Deanery of Glyn Aeron (St Davids, 1997-8).

St Restitutis represents a Latin, rather than a Celtic dedication (Various, 1994, 395).