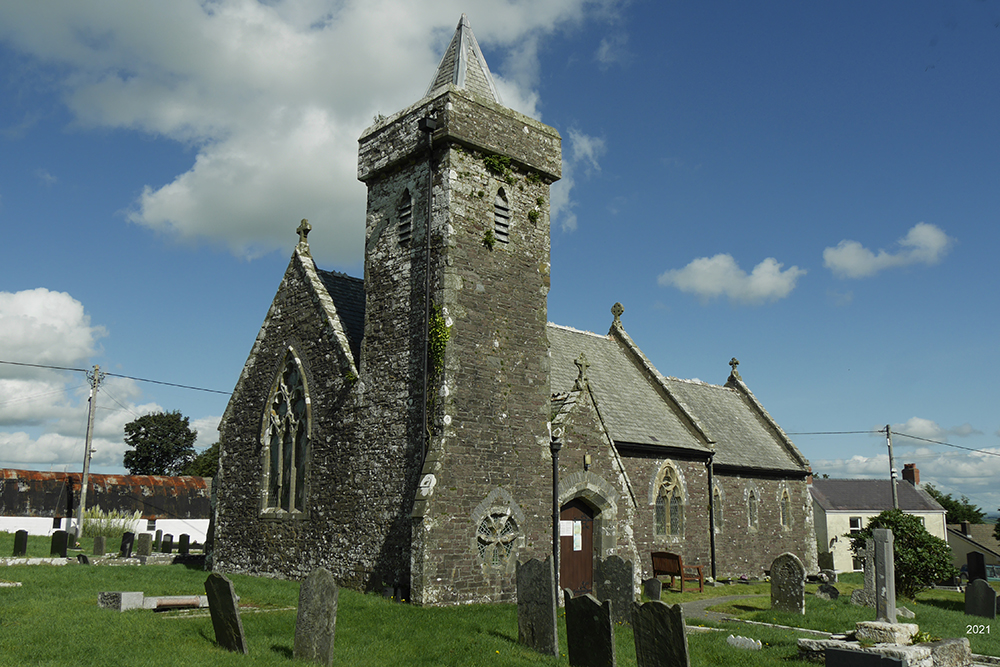 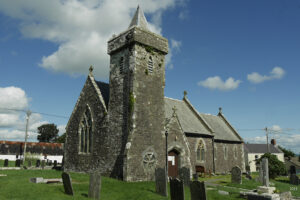 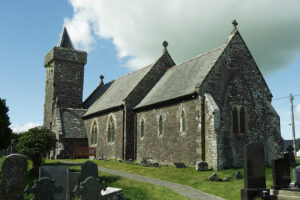 Archaeological potential – very good. Oval earthwork platform beneath 100% of church; no drain or cutting around church; heating chamber beneath 15% of church; suspended flooring, with underfloor heating ducts, in 40% of church; is no evidence for any below-ground crypt/vault; external memorials significantly close to 10% of church.

St Sadwrnen, Llansadwrnen, is a multicell church, of medium size. It was rebuilt in 1859 possibly retaining some of the core fabric from its predecessor (PRN 3910); a niche in the chancel was either retained or re-used.

The present church consists of a 3-bayed chancel, a 4-bayed nave, a south porch, a 3-storeyed tower west of the porch, and a lean-to vestry and boilerhouse north of the nave. Construction is in Old Red Sandstone rubble; there is some limestone in the vestry/boilerhouse. A late-Decorated niche in the chancel east wall, north of the altar, has been retained or re-used from the medieval church – it is 14th century. All other dressings are in grey oolite; the openings are neo-gothic and comprise single, cusped lancets and cusped 2-light windows with simple tracery. They are from 1859 with the exception of those in the vestry/boilerhouse which are from 1919. There is a plain chimney from the boilerhouse heating chamber also from 1919. The roofs are slated gables; the vestry/boilerhouse has a slated lean-to roof while the parapetted tower has a slated pyramidal roof. The floors are suspended except in the porch.

The limestone font is 19th century. An altar table in ‘Queen Anne’ style, from the late 17th or early 18th century, stood within the church in 1919 (NLW, SD/F/417), present whereabouts unknown.

The church stands upon a pronounced, oval earthwork platform, primary? or 1859 demolition debris?. There neither an external drain or cutting around the church. There is a below-ground heating chamber in the vestry/boilerhouse. The flooring is suspended in the nave, with underfloor heating ducts. There is no evidence for any below-ground crypt/vault. Some external memorials lie significantly close to the east end.

An inscribed stone is said to have lain within the porch (Williams, 1923, 2); its present whereabouts are unknown. There is a cross-base in the yard (PRN 7423); it now supports a sundial dated 1805.

St Sadwrnen, Llansadwrnen, was a parish church during the medieval period (Rees, 1932), of the medieval Deanery of Carmarthen. The medieval patronage is unknown.

In 1998 St Sadwrnen, Llansadwrnen, was a parish church. The living was a rectory, held with Laugharne and Llandawke (Benefice no. 525) in the Archdeaconry of Carmarthen, Rural Deanery of St Clears (St Davids, 1997-8).

Inscribed stone, located in room to left of the Porch. Is this the one mentioned by Williams, 1923? 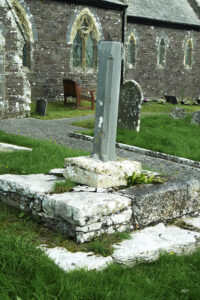