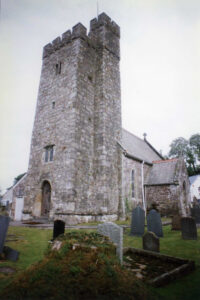 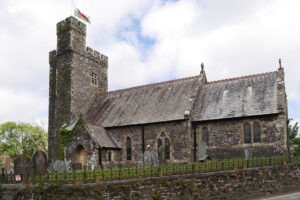 Reasons for Listing: Included as a substantial church with late medieval tower and for the connection with Griffith Jones, pioneer of education in Wales, and of adult education internationally.

Archaeological potential – good. No external cutting or drain; suspended floors over a void in 50% of church; below-ground floor in 5% of church.

The present church consists of a 2-bayed chancel, a 3-bayed nave, a 2-bayed vestry north of the chancel, a south porch, and a 3-storeyed west tower which represents the only surviving medieval component; there is a lean-to boilerhouse north of the tower. Construction is in snecked Old Red Sandstone rubble; the tower is in random limestone rubble. Pointing is mainly from 1865 and 1900, and the interior is plastered. All openings, except within the tower and vestry, are from 1865 and neo-gothic. They include the moulded chancel and tower arches, the 2-centred doors, and the windows which are uncusped single-, double- and triple lancets with green sandstone dressings. The vestry has angle buttresses and openings from 1900, with neo-Perpendicular, cusped, single- and 2-light windows in the east and west walls, with yellow oolite dressings; the external doorway has a Caernarfon surround. The boilerhouse is in similar rubble and has a below-ground floor. The roofs are slated gables, the boilerhouse has a slated lean-to roof while the tower roof was not seen; the softwood roof timbers, tiled passages and suspended floors are from 1865 in the chancel, nave and porch, and 1900 in the vestry, replaced in 1936. (There is a large, 18th century tablet to Gruffydd Jones lying in a tomb recess, from 1865, in the chancel.)

The west tower is in random limestone rubble, with incised pointing from 1947. It comprises 3 storeys and has the basal batter and string-course typical of the region. A square spiral stair turret projects from the eastern half of the south wall, entered through a segmental-headed doorway that appears to have been rebuilt in 1865 and lit by simple square slits from c.1500. The ground floor communicates with the nave through a moulded 2-centred arch rebuilt in 1865. The west door has a chamfered, 2-centred limestone surround which, with its infill, was inserted in 1865, but (re)using (and replacing?) medieval jambs; above it lies a cusped, 2-light window with sunk spandrels in a square limestone surround and label from c.1500. The ground floor is unvaulted, all stages of the tower now having intervening concrete floors from the 20th century. The woodblock floor may be from c.1900. The second storey is lit by a simple square light, with a chamfered limestone surround, in the west wall, from c.1500. The belfry stage has a cusped, 2-light opening with sunk spandrels in a square limestone surround, from c.1500, in the north and east faces; the west face is pierced by a 2-light opening with semicircular, uncusped heads in chamfered limestone, probably contemporary. The crenellated parapet, from c.1500, lies on an external corbel table, which continues around the stair turret; a second corbel table lies beneath the contemporary turret parapet, at a higher level.

There is neither an external cutting nor drain. Floors are suspended over a void in the nave and vestry. The boilerhouse floor lies below churchyard level. No external memorials lie significantly close to the church.

The west tower represents the only surviving medieval component and is from c.1500. The remainder of the pre-1865 church, with the exception of the vestry, followed the same plan as today being depicted as such on the tithe map (NLW, Llanddowror, Tithe Map, 1845), while in 1865 it was proposed that the ‘old church be taken down and a new one built on the same foundation’ (Carms. R. O., CPR/58/44).

The 1865 rebuild affected the chancel, nave and south porch of the church. It had evidently been completed by 1866 when ‘the church has largely been rebuilt’ (Anon., 1866, 195). A ‘small’ vestry occupied the site of the present vestry, which was added in 1900 to the designs of the architect E. V. Collier of Carmarthen (NLW, SD/F/307).

The interior was reskimmed in 1947 (Carms. R. O., CPR/58/34). The tower was repointed and its tabling repaired. The boilerhouse was partly rebuilt and reroofed, and its boiler was replaced. Heating was installed in the vestry (ibid.).

The font has an octagonal bowl with quatrefoils, an octagonal stem and a square base, from the 15th century (RCAHM, 1917, 247) but now concealed beneath paintwork.

St Teilo, Llanddowror, was a parish church during the post-conquest period (Rees, 1932), of the medieval Deanery of Carmarthen. It appears always to have been in private patronage, of the Lordship of Llanddowror.

In 1998 St Teilo, Llanddowror, was a parish church. The living was a rectory, held with St Clears, Llangynin and Llanfihangel Abercywyn (Benefice no. 804) in the Archdeaconry of Carmarthen, Rural Deanery of St Clears (St Davids, 1997-8).

The dedication is given as St Cringat by Lewis, 1833.