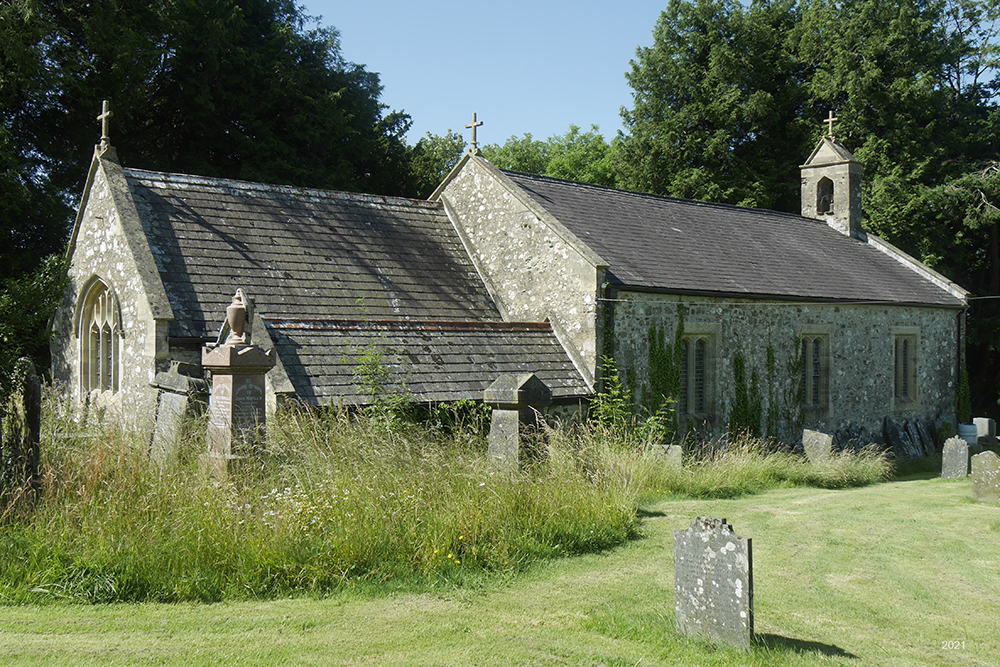 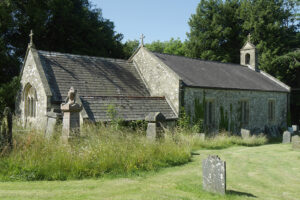 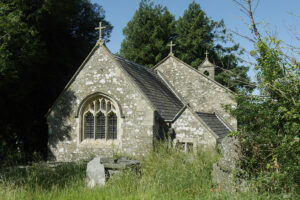 Reasons for Listing: Included as a church of early origins with important inscribed stones set into walls.

The present church consists of a 2-bayed chancel, a 4-bayed nave, a 2-bayed vestry north of the chancel which was formerly a north chapel, and a south porch. Construction is in limestone rubble throughout, unsquared and uncoursed, but with ?medieval quoins. The medieval nave west wall has a slight batter. Some poor ribbon pointing. All internal walls are rendered/plastered.

It is not possible to closely date the core of the fabric but the nave (and possibly the chancel) may be 13th century in origin. The architect responsible for the 1896-8 restoration, Henry Prothero, considered that the chancel and nave were primary and that the north chapel was secondarily added, c.1500 (Evans, 1898, 242). The nave was, at this time, only slightly wider than the chancel. The north chapel was a single bay, communicating with the chancel via a segmental arch. Prothero considered that it had extended eastward along the north side of the nave as a 3-bayed north aisle, opening into the nave by ‘3 very small arches with round pillars’ (ibid.; Prothero does not quote his source for this assumption).

Plans drawn in 1896-99 (NLW, SD/F/268) suggest that a medieval tomb recess lay in the east bay of the chancel north wall, but was removed when an arcade was inserted in 1896-97. there is a plain segmental headed piscina in the chancel south wall, and the 2 square-headed windows noted above, inserted during the early 16th century (when the chancel may have been rebuilt); the similar single light re-used in the vestry north wall in 1896-97 may have come from the chancel east bay north wall.

In 1833 the church was described as having ‘no architectural claims to notice’ (Lewis, 1833). It was heavily restored in 1838, to an extent that was regarded at the time as constituting a ‘new church’ (Evans, 1898, 242), much of the medieval church apparently having been ‘pulled down’. The nave was rebuilt in its present wide form, taking in the former north aisle and involving the construction of a new north wall (ibid.) and the presumed demolition of the arcade, whatever its form. Only the chancel (including the chancel arch), the north chapel (which became a vestry), and the core of the nave south and west walls were retained (ibid.); the arch from the chapel into the nave may also have been preserved. Masonry from the medieval fabric was said to have been used in the construction of the house of the incumbent responsible for the rebuild, in particular dressings including the medieval south door (Evans, 1898, 246) whose opening was blocked.  Windows were replaced by the single-light, timber framed (sash) windows standard for the period. The rebuild was apparently of poor quality and by the end of the 19th century the church was in a very poor condition; it was re-roofed again in 1894-5 (ibid.) but the new roof was described as ‘very poor and ugly’ just 3 years later (NLW, SFD/F/268).

A plan of the church prior to the 1896-8 restoration shows it much in its present form, though without the south porch (NLW, SD/F/268). There is a west door into the nave (presumably of 1838) and the nave side walls each have 3 windows. The 2 medieval chancel south windows, and the arch from the chancel into the vestry/north chapel, are depicted as blocked. The chancel and vestry east walls are each pierced by a sash window. The ?tomb recess in the chancel north wall is also shown. Box pews were present throughout the nave, and a stove heated the north-east corner; the font lay in the south-east corner of the nave. There was a bellcote on the nave west wall (Anon, 1850, 69).

The church was restored in 1896-99 by Prothero & Phillot of Cheltenham (NLW, SD/F/268). The chancel was restored first, at a cost of £300. The plan accompanying the Faculty (ibid.) suggests that the floor was considerably lowered, described as ‘levels rearranged’ in the specifications. A second bay was added to the east end of the existing vestry (formerly the north chapel). The arcade into the vestry/north chapel, which had been blocked at some prior date, was reopened (and unaltered?), and accompanied by the addition of a second, similar arch into the eastern extension replacing the possible tomb recess (see above). The two 16th century windows in the south wall were also reopened, and a third similar window re-used in the vestry north wall (see above). The plain medieval piscina was ?exposed and retained. A new 3-light traceried east window replaced the timber-framed window of 1838. An entirely new, softwood king-post roof was put on the chancel, and a collar-rafter gabled roof over the vestry. The walls were ‘repaired’ (possibly heightened?) and replastered, and new weather tabling added. All dressings were in Caerfai stone or oolite. The passage was tiled and suspended woodblock flooring laid beneath the new stalls. All fittings were new or replaced including a desk, altar rails and a small reredos.

The nave and new south porch were the subjects of a second phase of restoration, commenced in 1898 and bringing the total cost to £1350, a considerable sum (ibid.). The chancel arch was retained, but the archway into the vestry/north chapel was replaced. Floor levels were again apparently lowered. The west door was blocked, retaining an internal recess, and a new south door inserted (in the same location as a medieval precursor?). New 2- and three light, square-headed neo-perpendicular windows were inserted, mainly within the existing (1838) sash-window openings but with extensive infilling, and a new west window built. The bellcote was rebuilt as a plain square gabled structure with a single opening and bell. Walls were repaired ‘where necessary’ as in the chancel, including new tabling and plaster. A entirely new roof was put on, with a softwood ceiling. The passages were tiled and suspended woodblock flooring similar to that in the chancel was laid beneath the new seating. All fittings were replaced, including the seating, pulpit, and font.

The south porch was an entirely new construction; it is a north-south gabled structure with a 4-centred door with moulded heraldic motifs. Dressings were as those in the chancel. The shallow open drain noted above was excavated.

During removal of the old internal plaster a number of pieces of moulded masonry were uncovered, some of which were apparently preserved in addition to the two rediscovered 16th century windows and the window re-used in the vestry (Evans, 1898, 243). This may have prohibited stripping of all the plaster.

There has been no real further work at the church subsequent to 1899, but the present organ is early 20th century, possibly by Dyatt of Gloucester (Bennett, 1992).

Four ECMs are built into the nave south wall (Dyfed PRNs 919, 1200, 1201 and 1202). Three are inscribed stones, the fourth a cross-incised stone. They were apparently put in their present positions during the 1838 rebuild; one of them was apparently discovered ‘under a heap of rubbish’ in 1827 and propped loose against the south wall (Lewis, 1833).

St Tysilio, Llandysilio, occupies a high-certainty site (and probably the location) of a pre-conquest religious foundation –

During the post-conquest period, it has always apparently been a parish church, in the medieval Deanery of Carmarthen (Rees, 1932). In 1291 it was assessed at £8, a sum similar to others in the district and more than most (Green, 1912, 259). In 1536 the value was £7, when it was a vicarage in the patronage of the Bishops of St Davids, and the rector was the prebendary of Llandysilio in the Collegiate church of Brecon (ibid.).

In 1749 the living was sequestrated owing to a vacancy (ibid.). By 1833 it was a discharged vicarage of the Archdeaconry of Carmarthen, in the patronage of the Bishops of St Davids, rated in the king’s books at £7 and endowed with £400 royal bounty (Lewis, 1833).

In 1998 St Tysilio, Llandysilio, was a parish church. The living was a vicarage, held with Clunderwen and Castell Dwyran (no Benefice No.), in the Archdeaconry of Carmarthen, Rural Deanery of St Clears (St Davids, 1997-8).