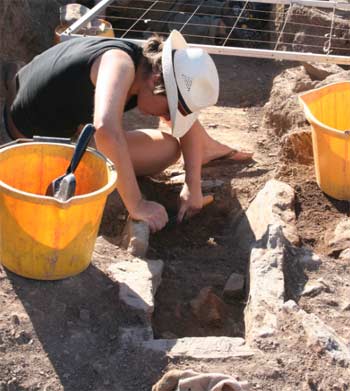 This project emerged from the Early Medieval Ecclesiastical Sites assessment, in which a number of ‘at risk’ coastal cemetery sites were identified. They included cist cemeteries associated with St Anthony’s Chapel, West Angle Bay (PRN 35095), and at St Brides (PRN 7606; SM80211094) both of which are cliff-top sites suffering from coastal erosion. Both sites lie within the Pembrokeshire Coast National Park (PCNP) and the threat to the sites has been recognised by the Park Authority. The principal objective of the project was to assist PCNP in the formulation of management strategies for the future conservation of these sites and to raise awareness of their importance and vulnerability. The project was jointly funded by Cadw, PCNPA and Cardiff University.

Evaluation trenching was undertaken at West Angle Bay in July 2005 by Trust staff and PCNP staff, assisted by students from Cardiff University. At least three groups of cist burials are present. The first group has been eroding from the cliff-face (at SM85140308) since at least 1997. A second group (at SM85020311) were identified during the assessment, and were also eroding from the cliff. The third, revealed during the evaluation, was inland from these groups (at SM85150305) where an oval enclosure represents the churchyard around the former St Anthony’s Chapel. This chapel was in existence during the later medieval period and the site was marked as ‘Old Church’ on the tithe map of 1844. The chapel building has gone but the enclosure – which is marked as a dotted line and labelled ‘Burial Ground (Site of)’ on the OS 1st and 2nd Edition 25″ maps – is still detectable as a low, oval earthwork measuring approx. 20m in diameter.

A trench measuring 8m x 5m was excavated at this location. Six definite, and three possible cist burials were revealed, confined to an area within a substantial stony bank, represented by the oval earthwork. They appear to belong to a later phase of the cemetery site. The bank is earlier than any of the exposed burials but is probably constructed over an earlier cemetery, suggested by the presence of human bone within the make-up of the bank.

A deeper excavation through the bank also revealed an earlier feature, possibly a boundary ditch, following a similar alignment. A number of trenches were excavated between the cemetery enclosure and the cliff face, but no further burials were encountered, suggesting that the exposed burials are a diminishing resource. A number of samples were taken for C14 dating, phosphate analysis, and possible palaeoenvironmental analysis.

Just how the burials within the enclosure relate, chronologically, to the cliff-face burials is, until dating evidence is obtained, uncertain, but the sequence may be –
Phase 1 – unenclosed burials in an open field (including the cliff-face burials?)
Phase 2 – formalised burial plot established, enclosed by a ditch?
Phase 3 – boundary bank constructed, redefining the cemetery site and disturbing earlier burials

A fourth phase might be represented by the establishment of St Anthony’s Chapel, which was not identified. However, this may lie within the enclosure just to the north of the evaluation trench.

In addition to the work at West Angle, the exposed burials at St Brides were recorded, and the current cliff-face was surveyed. At least five more burials have become exposed since the site was visited in 2002.

For two weeks in July a second season of excavation at West Angle Bay, Pembrokeshire, was undertaken by staff from the Trust, PCNP, with students from Cardiff University and local volunteers. In addition to the grant-aid from Cadw, the project was also supported by PCNPA (who covered the cost of a geophysical survey) and PLANED (who provided funding for an outreach post). 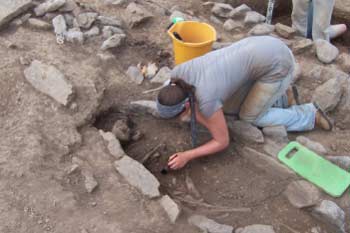 Six trenches were located to address specific questions posed by the geophysical survey (undertaken by Stratascan) and the previous year’s excavation. An impressive ditch (as yet undated, but possibly prehistoric) and a probable ditched trackway were sample excavated.

A trench from the previous season was reopened to clarify the character and deposition sequence of the sub-circular enclosure wall of the early medieval cemetery, bank and an earlier ditch of possible prehistoric date apparently on the same alignment. Several graves were excavated, including one cist grave and several infant burials.

The site was located adjacent to a popular holiday beach. Consequently, it received large numbers of visitors. The project also gave many volunteers and students the opportunity to gain excavation experience. 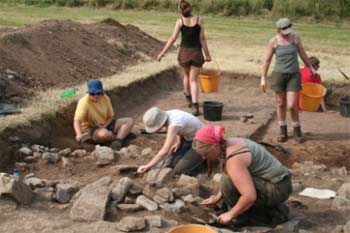 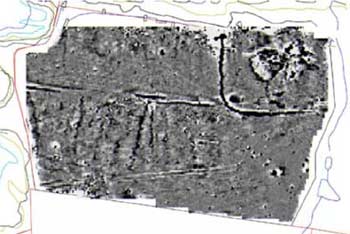 The geophysical survey at West Angle Bay, with the sub-circular cemetery enclosure located within a larger rectangular enclosure in the top right of the image

A report on the excavations of 2005 and 2006 has been produced, including specialists’ reports. It is intended to publish the report of the excavations with the results from the excavation of an early medieval cemetery at Brownslade Barrow. During 2007-08 the geophysical survey was extended into neighbouring fields.