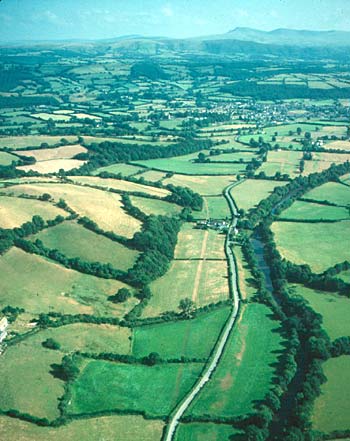 There are three main objectives of the project: assessment of the significance of Roman military sites; evaluation of the vulnerability of the sites and a review of scheduling criteria and management strategies; and an enhancement of the HER.

The Roman road between Llandovery and Pumsaint showing as a parch mark. 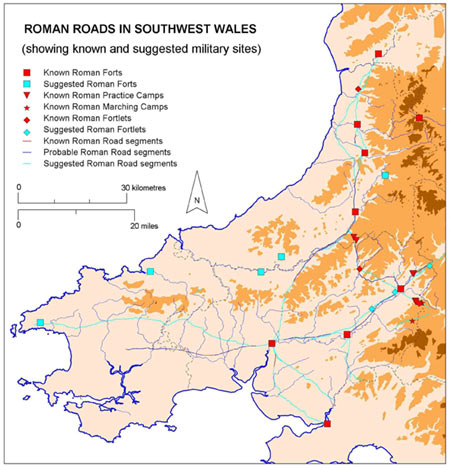 The main element of the project during 2004/2005 consisted of a review of all known evidence for the military in southwest Wales, with an emphasis on roads. GIS tables were created showing the lines of certain, probable and suggested lines of Roman roads. This was done in conjunction with the enhancement of the HER. Approximately 200 new records were created. In addition, site visits were made to several sections of road where evidence indicated the presence of a well-preserved agger. Scheduling recommendations were made for four sections of road.

In addition, a magnetometry survey was carried out, in conjunction with GAT, on part of the Roman fort and vicus at Llandovery. This demonstrated that extensive buried remains survive beyond the upstanding fort’s defences. It is unclear whether these remains indicate an earlier fort, an annexe or part of the vicus. An extension to the scheduled area has been recommended. 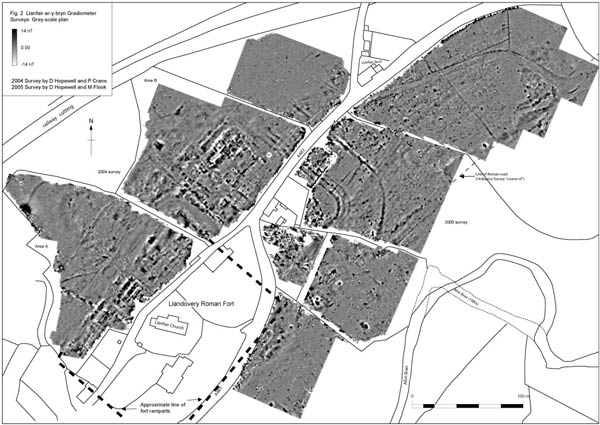 The magnetometry survey of the northeast corner of Llandovery Roman fort.

This was a continuation of the 2004-05 project and consisted of the geophysical survey of two forts/vici – Llanio and Trawscoed. The work was carried out in conjunction with Gwynedd Archaeological Trust.

At Trawscoed a roughly rectangular area with dimensions of 160m x 120m was surveyed. It included the northern quadrant of the fort and areas to the north and east of the defences. Clear results were obtained with the fort defences, roads and a series of six barrack blocks clearly visible. Extra-mural activity in the survey area seems to consist mostly of scattered hearths and agriculture, although an anomaly alongside the road to the northeast could represent a mansio or other large building.

At Llanio two roughly rectangular areas with dimensions of 80m x 40m and 60m x 60m were surveyed. They were in adjacent fields and were designed to sample the extra mural activity to the east of the fort. The survey has shown that significant archaeology survives below ground, and is suitable for geophysical survey. However, the small survey areas make interpretation of larger scale features and general settlement patterns difficult 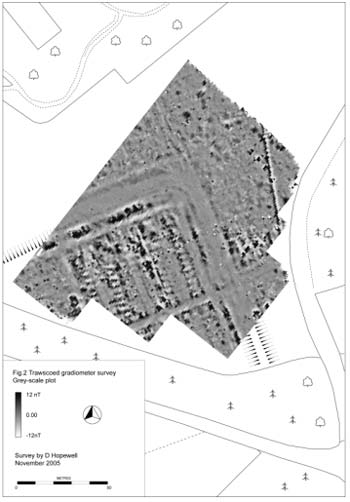 In November 2006 further geophysical survey in conjunction with Gwynedd Archaeological Trust, was undertaken on the area to the northeast and east of the Roman Fort at Trawscoed. A number of features including roads, rectangular buildings and pits of probable Roman date were detected, as well as circular features which could be the remains of Bronze Age round barrows. The fortlet at Erglodd, near Borth, Ceredigion, was also surveyed. Very good results were obtained revealing a possible two-phase fort containing several buildings. There was no indication of any settlement immediately outside the fort. 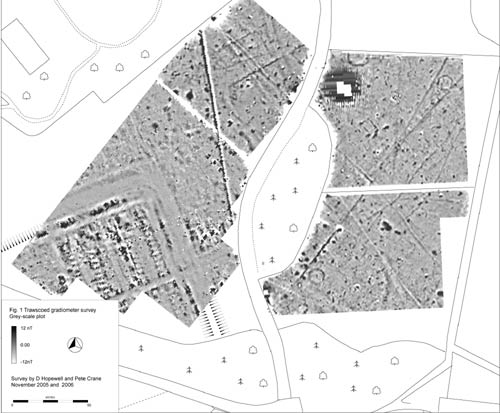 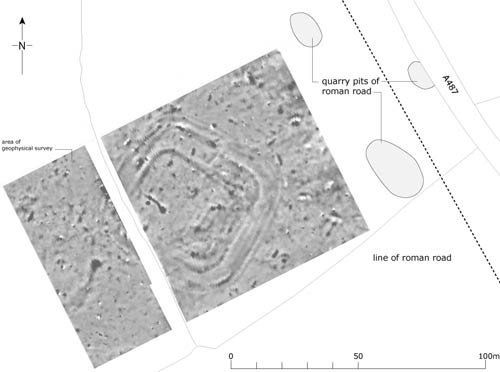 Part of the interior and a flat area to the northwest of the fort, the area considered most likely to contain a vicus, was surveyed at Pen Llwyn. No trace of the vicus was detected. Within the fort buildings appear to have been wooden throughout. The interior appears to initially have followed a standard layout with the principia, praetorium and granary in the central range and barracks in the praetentura. Several anomalous features suggest that a second phase of activity is also present.

Waun Ddu, a small, rectangular enclosure with a mound in one corner lying on open moorland was considered a possible fortlet, a medieval defended site with a motte, or both. Topographic and geophysical survey demonstrated that it is a fortlet containing ranges of rectangular timber buildings and a furnace. A Roman road to the southeast of the fort was located during the topographic survey.

It has long been suggested that a Roman fort lies close to Cardigan, with several fields forming a rectangle close to Old Castle Farm considered the most likely location. Finds of Roman metalwork and pottery in neighbouring fields by metal dectorists in recent years have strengthened this suggestion. However, a geophysical survey failed to discover any trace of a fort, or indeed of any other archaeological feature. The context for the Roman finds is unknown.

In addition to fieldwork, a start was made on producing drawings for a new edition of Roman Frontiers in Wales. Further drawings will be produced in 2008-09. 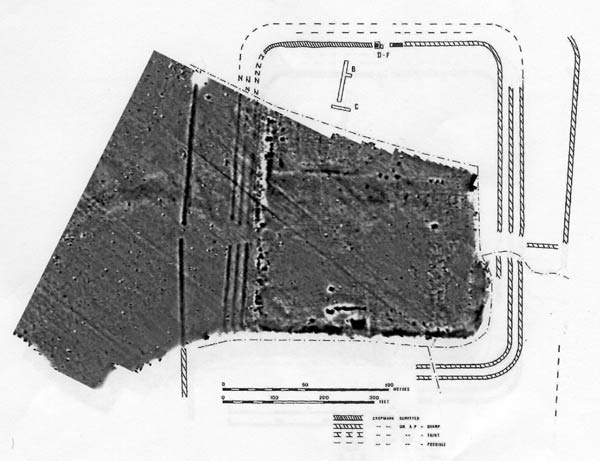 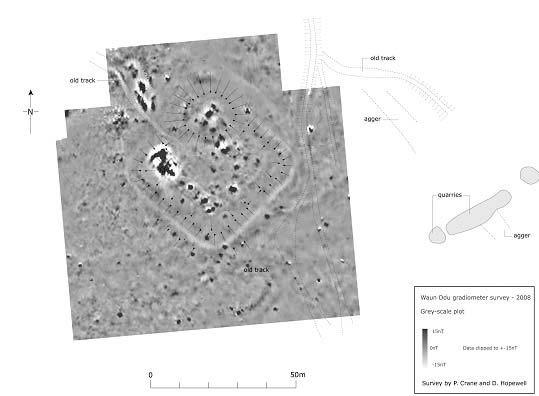 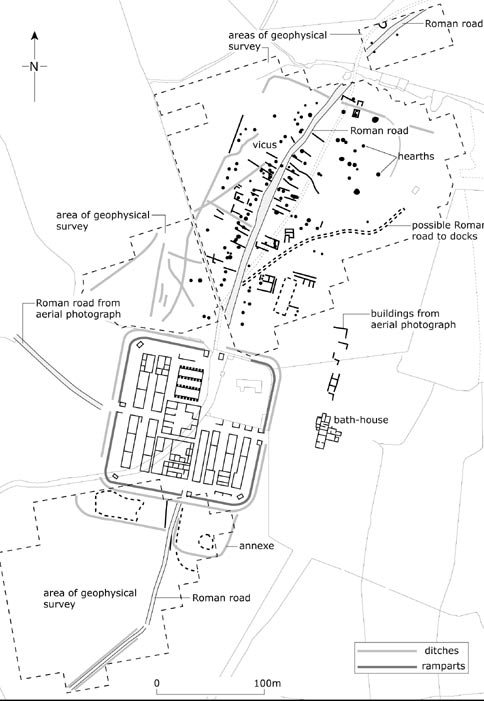 Cae Hun Fort. One of the many drawings completed for the Roman Frontiers in Wales volume.

During 2007-08 work began on compiling text and drawings for a revised edition of Roman Frontiers in Wales. As well as compiling some the gazetteer entries, Dyfed Archaeological Trust is producing all the illustrations for the volume. These will number several hundred. 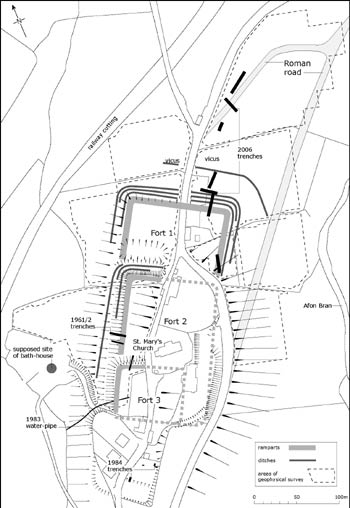