Capel Patrick (is) full west of St Davids and placed as near his country, namely Ireland, as it could well be. It is now wholly decayed. (George Owen, 1603)

Overlooking the beach at Whitesands Bay in St Davids, Pembrokeshire is the site of St Patrick’s Chapel. Very little is known about the Chapel, the only historical reference being from George Owen’s Description of Pembrokeshire from 1603.

Coastal erosion has been a concern at the site since the early 20th century, with regular reports of burials emerging from sand dunes.

In 2004, Pembrokeshire Coast National Park Authority attempted to slow down the rate of erosion by placing large boulders on the seaward side of the dunes. This was successful until 2014 when severe storms stripped away the boulders exposing burials once again.

Continuing damage to the Scheduled Ancient Monument meant there was an urgent need for excavation to retrieve as much information as possible. This excavation was carried out in 2014, 2015 and 2016 by Dyfed Archaeological Trust and the University of Sheffield with support from Cadw, the Nineveh Charitable Trust and Pembrokeshire Coast National Park Authority

Excavation of the cemetery has revealed over 100 burials to date. Radiocarbon dating has shown that the cemetery was in use from the 6th century to the 11th century A.D.

Analysis of the skeletons at the University of Sheffield has revealed a mixed population of men, women and children of all ages.

Graves were aligned east/west with the head to the west. In keeping with the Christian burial tradition there were no possessions buried with the bodies.

Some of the skeletons were in cists – graves lined and capped with stone slabs, a burial tradition common across western Britain in the early medieval period.

A unique burial rite was also identified: burials of children with white quartz pebbles placed on the top of the cists.

There is still a significant amount of evidence left to excavate, including an intriguing stone structure which pre-dates the burials.

European funding has been obtained for further excavation in 2019, 2020 and 2011. The aim is to continue the research into St Patrick’s Chapel as the archaeological evidence has the potential to transform our understanding of the Christian communities who once lived and died in Pembrokeshire during the early medieval period.

View of the site from the beach 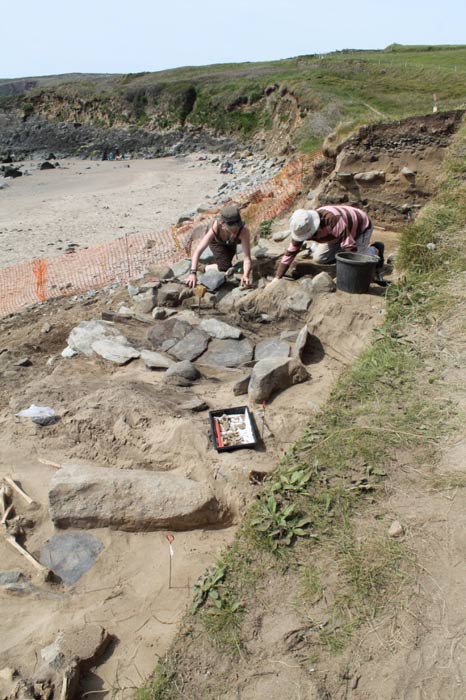 Excavating some of the long cist graves 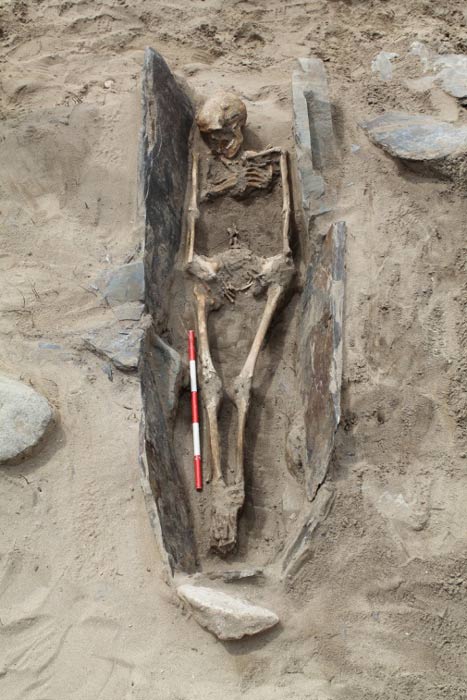 A long cist grave and skeleton