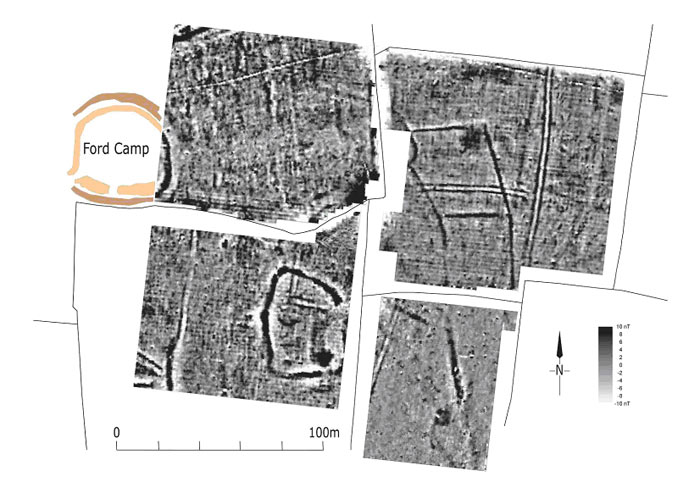 There is very little known evidence for Romanised settlement in southwest Wales. The only villa known is at Llys Brychan in Carmarthenshire, and a second has recently been discovered near Trawscoed Roman fort in Ceredigion. Other possible villa sites in west Wales are probably better classified as Romanised farmsteads.

The possible villa site near Wolfscastle is located to the east of Ford Camp, an Iron Age defended enclosure. In 1811 Fenton describes a visit to inspect the discovery of what he considered to be part of a Roman baths in a nearby hedge bank. In 2003, Dr Mark Merrony undertook a geophysical survey which showed evidence of a rectangular building. A small excavation revealed a paved surface of large stone slabs and other evidence suggestive of a Roman building.

This year DAT has been funded by Cadw to further clarify our understanding of the site and to help make decisions about protecting the site in the future.

A geophysical survey in 2010 covered a wider area than the 2003 survey and revealed what seemed to be an Iron Age defended enclosure close to the site of the presumed villa. However, excavation on the presumed villa site failed to reveal any evidence of the villa.

The 2010 geophysical survey. The presumed site of the villa is at the junction of field boundaries in the centre top. Note the newly discovered defended enclosure towards the bottom left of the survey.